Home Features Everyone Is Part of the Mission 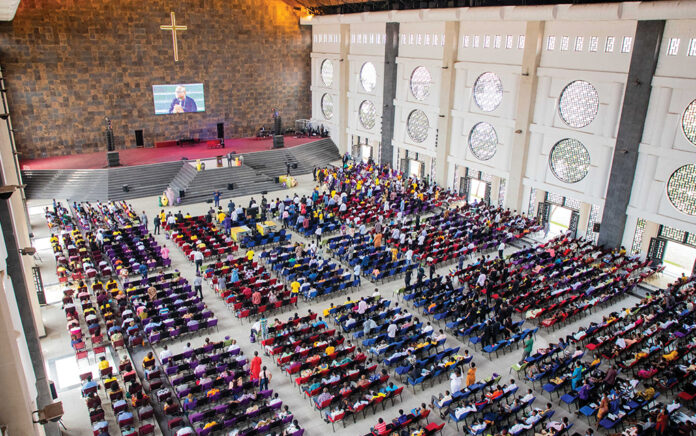 Lighthouse Chapel in Ghana started in 1985 just like many North American churches do, with a handful of people meeting in a school. By the second year, it had increased from five people to 40. It grew to 80 people during the next year through outreach, personal witnessing and being shepherded through the teaching of its founder, Bishop Dag Heward-Mills. In its early years the congregation was largely a fellowship of medical and nursing students meeting in a university classroom.

By the sixth year, however, attendance was at 300, and the group purchased a decrepit cinema hall to meet in. By the eighth year, attendance surpassed 800 people.

In Year 11, the church took a different path from its fast-growth counterparts in North America. Growth began to happen mainly in other cities and countries as the church established “branches.” By year 13, the emphasis on expansion through church planting resulted in a total of 70 branches—with global attendance of more than 5,000 people.

“Our pastors do what we call ‘deep-sea fishing’: hanging out before and after the service, and striking up conversations in the car park.”

Today, Lighthouse Chapel International draws an attendance of 4,500 to its largest church building in Accra, Ghana, known as the Qodesh (from the Hebrew word for “holy”). Not only is the Qodesh a vibrant church in itself, but the movement birthed a network of more than 3,500 churches across 67 countries. In 2016, the original church broke up into a number of Pentecostal denominations. Today, United Denominations, as the movement is known, consists of 14 denominations.

United Denominations has worldwide membership of 644,670, overseen by a growing network of more than 100 bishops under the overall leadership of Heward-Mills.

One of the leaders of United Denominations is Archbishop Kwasi Ampofo. His pathway is typical of many believers who have been released into ministry. An architect by training, he began pastoring in 1996, becoming a full-time minister in 2000. (That pastoring-before-being-hired sequence is also common—“We all came up as laypeople,” he says.) After a dozen years of pastoring, he was asked to oversee pastors as a bishop. In 2019 he became an archbishop.

When I interviewed him, Ampofo explained that the most successful church branches strongly link to Heward-Mills as the founder of the ministry. “They may look different from the mother church, but they synchronize with the ideas and visions of the founder. Everything God has taught him flows to us. Our best pastors help the church to say one thing.”

One of the most repeated lessons from Scripture that Heward-Mills emphasizes is the work of laypeople.

“They can preach, pray for the sick and do mission,” Ampofo says. “You don’t have to be paid by the church before you can serve God. Ninety percent of the church’s work is done by lay pastors—and then the full-time staff support them.”

From Outreach Magazine  The Mountains Are Calling

Heward-Mills sets a tone of relating to paid staff as family, not as employees.

“He’s concerned about your life, about the issues you go through,” says Ampofo. “He preaches that way too. In fact, if any paid ministers feel they are below interacting with the congregation, they are called for a conversation with their bishop. Our pastors need to constantly do what we call ‘deep-sea fishing’: hanging out before and after the service and striking up conversations in the car park.”

These relationships, which typically involve laughter and invitations for people to become close with their leaders, often produce more lay ministry. “We show trust in them by handing over assignments to them,” Ampofo says. Additionally, the church created what it calls the Informal Pastoral Training Program to train laypeople as shepherds, initially as cell leaders.

“Our secret is releasing many people into ministry.”

In fact, an entire training manual curriculum for leaders has been created. It presents the Bible’s teaching on church growth, church planting, missions and more, all with a practical emphasis on how to be a missionary.

“We help prepare people to watch for a call from God and then decide something like, ‘I’ll take a job in this country and start a church there,’” Ampofo explains. “We get laypeople into ministry by an open approach, by training and by making them feel that they are important. In church, many parts of the worship services are run by laypeople.”

The church has developed a series of short “schools” to train people for ministry, based in Scripture and drawn from Heward-Mills’ many books. Examples include a six-week new believers’ school, a school of solid foundations, a school of apologetics and a school of evangelism.

“We encourage everyone in the church to be part of one of our schools,” Ampofo says. Students take examinations and they graduate. They get points, and after progression in godliness, knowledge and skill, they become pastors.

The path toward maturity also utilizes cell-based Bible study, based on the message preached on Sunday. “Jesus said to go out and teach as part of his Great Commission. Everyone is to rise to some kind of teaching role,” Ampofo says.

Laypeople serve an important role in the church and do so for free.

“If everyone has to be paid, the church cannot afford it,” Ampofo summarizes. ”We teach that it’s good to sow and sacrifice. Then we use the money instead to build new churches.”

Ampofo is voicing ideas he was taught by Heward-Mills. “It is my strong belief that many people are called to be shepherds,” Heward-Mills wrote in What It Means to Be a Shepherd. “According to Ephesians 4:12, it is the saints who are expected to do the work. … Our secret is releasing many people into ministry—and that brings about church growth.”