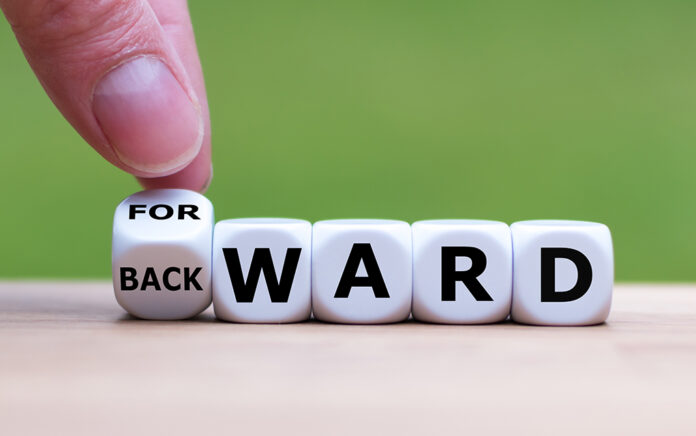 Instead of looking back to 2019, reimagine your ministry.

You hear it every day, and maybe you think it or say it.

No judgment here. I think those thoughts every day too.

The leadership question, though, is whether that line of thinking is helpful.

Here’s why: Leaders who always want to go back will never move their organizations forward.

First, let’s look at why that’s no longer a helpful way to frame your leadership challenge.

Second, I’ll share five things to focus on as you move forward that I hope will help you make progress, whatever you’re leading.

The future may be brighter than you think.

To do that though, you have to stop obsessing over the past.

Why Leaders Should Stop Comparing Everything To 2019

Had the pandemic that disrupted everything in 2020 been short-lived, it would have made sense to assume you could quickly snap back to where you were in late 2019 or early 2020.

But at a much deeper level, the crisis accelerated trends and created some new ones.

Church online went from novelty to universal. Online shopping permanently changed people’s buying habits. So many things shifted at home (work, school, shopping, church, fitness and entertainment) that even as things open up, nothing will quite go back to exactly as it was before. People found a new way of life, and while not wanting to stay there, they’re keeping the parts they like.

The post-pandemic world is something like air travel after 9/11. People will fly again. It will just never be the same.

In the same way taking your shoes off, carrying only small amounts of liquids, gels and aerosols, and moving through security is just normal now, new patterns of normal are emerging and still being shaped that will define post-pandemic life.

And as much as you might think I don’t want to stand in long security lines and take my shoes and jacket off or buy tiny shampoos, that thinking is irrelevant. If you want to fly, that’s what you have to do.

The world has changed, and leaders who try to go back to the way it was will increasingly find themselves trying to reach a world that no longer exists.

Moving forward, then, the question becomes what to focus on.

Here are five things that can help every leader start to make progress in the emerging world.

As everything inside you knows, that’s not sustainable.

Over time, there’s an inverse relationship between overworking and performance: the more hours you work, the less effective you become.

And ultimately, if you don’t declare a finish line, your body will. It’s called burnout.

Ask yourself (and the people who love you): Can I run at this pace for another year?

I’m guessing the answer is no. Some of you aren’t sure you can run at that pace for another month … or week.

If you’re looking to set a sustainable pace for your own life and for your team, this will help.

2. Focus On People You’ve Reached, Not The People You Lost.

I spend a lot of time in the church world, but the same is true in many industries and businesses: Some of the people you lost aren’t coming back, ever.

Fitness enthusiasts who never missed a day in the gym bought Pelotons and turned their garage into a killer home gym. They won’t be back.

The regular customer who never missed a Friday date night at your restaurant redid her kitchen and now only shows up once a month.

And some people who used to attend church regularly but were spiritually on the bubble, well … left. They won’t be back.

Others found digital church to be a good option half the time. They’re going to show up less often.

You can rail against that all day long. You’re not helping anybody when you do.

Getting angry at people who changed is one of the best ways to ensure you never change … you’ll stay angry at the past while everyone else walks into the future.

If you can move your focus away from your anger/sadness/grief/shock for just a few moments, you’ll notice you probably do have momentum.

There’s a group of new people coming in. Maybe it’s small. But it’s there. Maybe it’s big, but you haven’t noticed.

Here’s what you’re not seeing:

They don’t know what used to be.

If in your sadness, you continue to show disappointment at who’s not in the room, you’ll miss the people who are in the room. Not to mention the fine people who stayed with you through the entire crisis.

What you focus on expands. So change your focus.

This will be hard, but you need to die to the attendance/sales/growth numbers from 2019.

Don’t erase them (historic data matters), just stop looking at them and thinking about them every day.

Hold a service and bury those numbers in the backyard. That’s what was, not what is.

And then choose some new metrics.

Some possible metrics to focus on:

I realize it’s hard to let what was go, but it’s critical.

Focusing on new metrics for a new season will help you spot new momentum when it happens.

Back to focus, because it’s huge.

You can’t control a virus, government regulations or human behavior and habits. Rather than railing against them constantly on social media (please stop leaders, please stop), just focus on serving and helping people.

I was reminded of this a few years ago.

I’ve launch my leadership podcast in 2014 and have been fortunate to see over 18 million downloads. I’m deeply grateful.

But it could have been 25 million or 30 million.

Why? Well, in late 2017, the podcast industry changed the metrics.

Between 2014 and 2017 my podcast provider measured the number of downloads whether they were listened to or not. Then in late 2017, the industry standard for podcast measurement changed. Moving forward, only listened-to episodes would be counted.  You could download 100 episodes, but if you only listened to one, it counted as one.

That meant that almost overnight, my numbers (along with many other podcasters’ numbers) dropped in half. We went from a quarter-million downloads a month to 110,000 a month. It felt devastating.

But rather than focusing on what I couldn’t control (how podcast numbers are reported), I focused on what I could control: producing the best show I could.

It took a year, but we eventually outpaced our old numbers, and now we get 300,000–450,000 actual listens a month (sure, everyone calls them downloads, but the number is more true and pure).

It’s pretty clear that for churches and for most businesses, the future is hybrid: a seamless oscillation between digital and physical. (Here’s why the debate between online and in-person is a false one.)

When the pandemic hit, staff with online skill sets jumped in and helped however they could. That was noble and needed.

But moving forward, you’ll need to think about not just how to maintain what you currently have digitally, but how to enhance it. That likely means hiring some new skill sets on your team.

The Great Resignation of 2021 (some insights on that here from the Harvard Business Review) actually provides you with a great opportunity.

A great way to ask the question is “If we were starting over again today, what skill sets would we be hiring?” As you reimagine your future, you can reimagine your team.

If online remains an afterthought in your future, you won’t have much of a future.