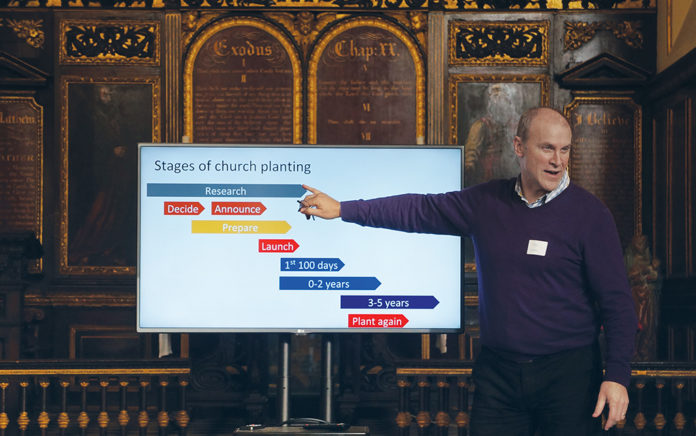 Lessons from a church plant movement in the U.K.

The recently launched Gregory Centre for Church Multiplication is founded on a powerful legend. As the story goes, Pope Gregory the Great, after seeing a blond, white-skinned slave in Rome and thinking him to be an angel, was inspired to send missionaries to the Saxon’s land. History then records that in 597 A.D., a monk today known as Augustine of Canterbury reached Britain. By the end of that same year, he had baptized thousands. For all his work to preach the gospel and establish churches, Augustine came to be described as a founder of the English church.

Ric Thorpe, a bishop in the Church of England, wants to follow in Gregory’s footsteps by raising up another generation of leaders to plant new churches and revitalize existing churches.

“Today it’s eight times more likely for an 80-year-old to be in church than an 18-year-old,” he says. “Historic denominations thrive on looking back, so I say, ‘If we’ve done church planting in our past, what if we do it again to lead us into the future?’”

Research shows that only about 1.6% of Britain’s population attended a Church of England congregation on any given Sunday pre-pandemic. “Suppose that increases tenfold to 16%,” says Thorpe. “I’m left with the question, ‘What about the other 84%?’ Church growth alone is not enough at this point. We need to start new churches in new places reaching new people in new ways.”

To that end, Thorpe began looking for creative followers of Christ who are entrepreneurial. These pioneers not only are willing to work on the edge of the institutional church, but they also go places the church hasn’t gone. One example is the United Kingdom’s Fresh Expressions movement, which forms new churches primarily to reach people who are not yet members of any church. “They start with a posture of ‘could we do it differently?’” Thorpe explains. “In my observation, these are leaders with an orientation of being outside the walls of the church. They are looking for people who aren’t naturally attracted to church. They start discipling people in their context, they form community—and out of that they form a church.”

They’re both evangelistic and missional. “As God sent his Son, and as Jesus sent his disciples, so they embrace the call to go into new places,” Thorpe says.

Thorpe first learned about church planting through a London church, Holy Trinity Brompton. While he was at university, he heard how the church had sent a group of people to reopen another Church of England congregation. Later he attended a conference led by Vineyard Church leader John Wimber that Holy Trinity hosted, where he heard more stories about the impact of church planting.

“I remember thinking, ‘I want to be involved in this. This is what I want to do,’” Thorpe says.

He progressed from being a lay worship leader at Holy Trinity Brompton into training for ordained ministry. Ten years after his ordination, he was chosen to lead a group from Holy Trinity to revitalize a flagging church. From there he led or supported many other revitalizations and new churches.

Now Thorpe’s apostolic role is one of sending others to do what he and his wife Louise “Louie” Arden-White did. “We use a simple timeline to think about the planting process,” he says. “We break it into the decision to plant, the preparation phase, the launch, the first 100 days, two years and five years. As part of that sequence, we encourage leaders to plant again.”

Thorpe uses an analogy for apprenticeship from the craft guilds of the eighth through 10th centuries. Workers would learn from an expert, and then they would pass their skills along to the next generation.

“Our practice today is that church planters and revitalizers take an apprentice planter with them, who will go on to plant again, while the original sending church takes on another apprentice planter for themselves. Thus, you have multiplication potential—four churches affected, not just two,” he says.

One of Thorpe’s inspiring examples is Alex Wood. Fifteen years ago Alex, who was not a Christian at the time, was invited to the Alpha course, which Holy Trinity Brompton has popularized through its rector, Nicky Gumbel. Alex refused twice, but eventually came to the meetings full of cynicism. He was out to disprove Christianity.

Instead, he came to Christ. He was invited to help on the next round of the Alpha Course, and he said yes. For the third course, he led one of the groups. After joining the staff of Holy Trinity Brompton, he and his wife offered to go as lay leaders to serve on a church plant to St. Peter’s Brighton, a church that Holy Trinity had helped revitalize. While there he went through the process to become an assistant pastor. Several years later, he took a group from that growing church to the city of Portsmouth, becoming a church planter himself.

Not having a church building, they rented a department store that had closed. The church not only outgrew that location, but they sent teams to revitalize two other churches. More recently he is overseeing a further three churches in another city in revitalization efforts.

“What you’ve got here is someone outside the church who came to faith and has served across four generations of churches—the current one to a great-grandchild, you might say,” Thorpe summarizes. “When you get to the fourth level, you have a movement. You’re looking at well over 2,000 people involved today in all these churches, not counting Holy Trinity’s pre-pandemic attendance of more than 4,500. That’s just one strand of a more extensive planting story from Holy Trinity, which has planted 25-plus churches so far, all focused on people who have had no previous connection to the Christian faith.”

Thorpe likens the idea of serial church planting and revitalization to what happened with Epaphras from Colossae on Paul’s third missionary journey. Epaphras came to faith and then is sent back to Colossae and to Laodicea and to Hierapolis (Col. 1:7–8; 4:12–16).

He also compares today’s efforts in the United Kingdom to that biblical pattern. “This is just the latest version of Jesus’ command in Matthew’s Gospel to go and make new disciples,” he says.