Home Features Soulfires: Following the Heart of Christ to Honduras 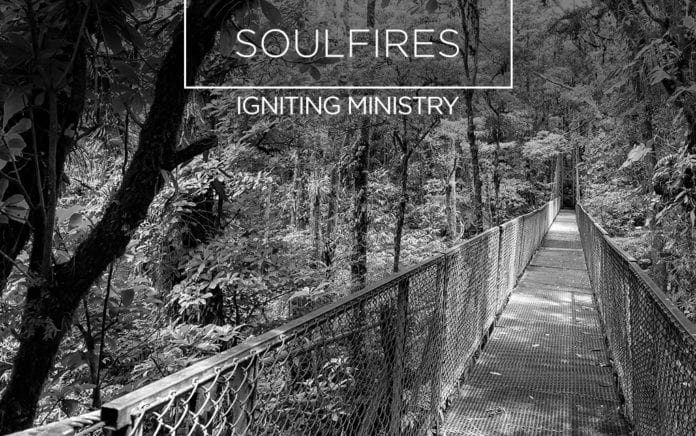 The astounding story of Gracie Murphree’s journey from freelance writer in Alabama to chief of special crimes in Talanga.

Gracie Murphree looks at the stacks of important files in front of her—each one with the power to save lives—and shakes her head in disbelief. It’s been 13 years since God placed her in this position. A miracle happened to bring her here. There is no other way to explain it.

Gracie sat with her forehead pressed against the airplane window, looking down through the clouds and trying to keep her sniffles to a minimum. The happy voices of the other members of her mission team could be heard from their seats behind and around her, all of them excited to be on their way back to Alabama from the rough and tumble neighborhoods of Honduras after a 10-day trip. They couldn’t wait to see their children, sleep in their beds and resume life as they knew it.

But as the lush mountains around Tegucigalpa grew smaller and got farther in the distance, Gracie couldn’t help but feel that while everyone else was going home, she was actually leaving it. The tears rolled freely down her face.

What is wrong with me? she thought.

Arriving in Alabama put both Gracie and her husband, Lee, into back-to-reality mode, tending to their daughter and son, their house, Lee’s business and the two churches where he served as pastor, and Gracie’s work as a writer and editor. A few days passed before they finally got a chance to sit with each other and catch up. What started as a simple debriefing soon turned into a time of confession. Each felt an overpowering need to return to Honduras permanently even before getting on the plane to come home. Their eyes widened.

When they finished praying, the couple looked at one another and realized their lives had just changed. Both knew what stretched before them: selling the house and the cars, quitting their jobs, leaving everything behind and moving to Honduras. To do what? Why were they being sent?

They didn’t have a clue.

Fundraising without being able to answer any questions regarding where the money would go was just the first of many difficult tasks that lay ahead. “So what will you be doing in Honduras?” potential donors wanted to know.

The reply “God hasn’t told us” didn’t go over very well, so Gracie and Lee kept it generic and cited Scripture given to Gracie during her quiet times—Isaiah 58:6 and 61:1. “Every time I pray for Honduras,” Gracie would say, “I feel a darkness like a cloud hovering over me, slowly descending until it pushes me to the ground. The darkness and pain press onto my spirit, and when I come out, I’m soaked in tears and am deeply shaken.”

It was heavy—not the kind of answer most people heard from missionaries—but it was true.

Donations began to roll in. Every financial need that Gracie and Lee had was covered by donors and the occasional miracle, including their home selling in one week at asking price, and their daughter receiving a four-year scholarship. It was much-needed confirmation in the face of a brutal collective response from family and friends who called Gracie a horrible mother and regarded the pair as crazy for listening to voices and chasing dreams. While the criticism was harsh, Gracie and Lee could understand that their stories were hard to swallow. Who uproots their lives in every way to go do nothing in particular in Honduras?

“The sent,” Gracie would say to herself.

Arriving in Honduras, Gracie and Lee had suitcases and a desire to serve but not much else. They had to trust that God was going to make sense of such a drastic life change. Church leaders welcomed them warmly and offered support, but could not provide much in the way of direction or purpose other than to say they would join the couple in trusting that God would reveal himself.

From Outreach Magazine  Rich Stearns: Are We Radical Enough?

The Murphrees braced themselves for a long wait.

One month later, the rainy season hit with its usual disdain for all things man-made. In that particular year, the police station fell victim to it and half of the post collapsed. Both Gracie and Lee felt the Spirit leading them to repair it. When the idea was brought up to the villagers to see if they were willing to help, their reaction was unexpected. The locals saw the police as hopelessly corrupt, and most were terrified of them.

Gracie and Lee took the matter to God in prayer and both received a distinct answer: The purpose of their ministry in Honduras would begin with the rebuilding of the police post. Four weeks later, the rebuild was nearly done and the members of the police department looked forward to the station being functional again. The Murphrees were happy with the progress as well and a little more than curious to see how God was going to reveal his purpose through it.

Then came the day 12 armed men in blue-and-black camouflage arrived at their home like a SWAT team, causing a panic in the mission staff and seven visiting pastors. The intimidating colonel of police, with plenty of gold leaf on his cap, strode forward and stopped in front of the rather frightened Gracie as his men watched. “We’re aware of your activities,” he said.

With pressure from his superiors to strengthen communication and relationships with the community, the colonel saw an opportunity in the Murphrees. He basically recruited Gracie and Lee to stand in the gap between the rank-and-file Hondurans of Talanga and to teach the police English so they could better communicate with other missionaries in the area.

The Muphrees couldn’t believe the extraordinary influence they had been given. God had pulled off a miracle.

The friendship between Gracie, Lee and the colonel grew close over coffees and dinners. He revealed that he too had given his heart to Jesus and wanted to see deep change in the community. Gracie shared her testimony about having been a victim of rape, which resulted in becoming a young single mother, She also had experienced domestic violence and psychological abuse and other tragedies. She explained to the colonel that she had worked as a special needs foster care provider, had advocated for victims and had experience in investigation as a freelance correspondent.

They prayed together for their work and the future of Honduras, then went into the streets with the police and shared the Word of God, prayed over the people and offered food and medical assistance. Things were changing.

But God was just getting started.

In bits and pieces, the colonel began to reveal something else that was on his heart. The high level of abuse toward women, children, the elderly and the disabled was alarming and catastrophic, quickly becoming an international disgrace and crisis.

“I want to ask you a very important question,” the colonel said to Gracie. “I’ve spoken to the minister of security and we have agreed: We want you to write a program for victims of violence—specifically focused on these vulnerable groups. Will you do it?”

Gracie paused. I’ve only been here a couple of months, and I’m in the office of a police colonel asking if I could write a program to help victims of special crimes? I’m not qualified to do that! I wouldn’t have a clue where to begin.

“Sure,” she heard herself say.

A Position of Power

The next four months were a grueling mix of hard work and panic. But by God’s grace, she finished the program, something she considered a miracle—but it was not the only one they saw. Over those four months, Gracie also learned to speak Spanish fluently. In just 120 days, she was reading, writing, speaking and understanding Spanish perfectly as if a switch had been flipped. She was even dreaming in Spanish.

The day came when she was on her way to the colonel’s office to present her program: Proyecto de Colaboración de Apoyo Para Victimas de Violencia y la Niñez. (Project of Collaboration of Support for Victims of Violence and Children). She was scared to death.

The colonel took the report and placed it off to the side with a large smile on his face. He gestured for her to follow him.

Their heels clicked down the long staircase at the police headquarters—the Honduran police colonel and the missionary with the quizzical look on her face. The staff snapped sharp salutes as they passed. Arriving at an office, the colonel motioned for her to feel free to step inside. It was then she saw the title on the door: Oficina Integral de Atención de Delitos Especiales (Special Crimes).

It was her office.

In just six months, God had sent a mother, pastor’s wife and freelance writer from Alabama to become the chief of special crimes of a Latin American country. Gracie was about to engage in the work of bringing hope and justice to the downtrodden—and not by appealing to a power seat. By God’s hand, she was now in that power seat.

Through the power and authority of Jesus Christ, the Murphrees have rescued over the years thousands from rape, sex trafficking, kidnapping and abuse. Seeing the need for a safe place for these victims to go, they opened a short-term shelter in 2007. They also rescued many girls, some as young as 10 to 14, pregnant by rape and incest, who had been sent to a government orphanage. In 2010 they opened the first home for girls like these to help heal and restore their lives.

The government certified and sent Gracie around the country to train thousands of police officials, investigators, prosecutors and judges in how to conduct investigations and care for and treat victims of special crimes.

All of this change was not without danger. Gracie received thousands of death threats while handling cases and survived five assassination attempts. But God went before her and kept her safe. A visiting pastor said she saw four warring angels that accompanied Gracie everywhere; one had the face of a lion.

God continues to grow the influence of this ministry. The couple launched Heart of Christ (El Corazon de Cristo) into all of Latin America, teaching the gospel justice model with the intention of duplicating it throughout the hemisphere.

Had God revealed his plan for Gracie to be working alongside some of the most powerful and high profile leaders in Central and South America before she came to Honduras, she never would have come—and she never would have felt qualified. But God puts people where there is a need, and then presents the need. All he requires is obedience to the call, even when nothing about it makes sense.

For more of our coverage on justice issues see the January/February 2019 issue of Outreach magazine or go to OutreachMagazine.com/Justice.

Gracie Travis-Murphee is president and co-founder of Heart of Christ-Corazon de Cristo, and the Justice Project Honduras. She tells her story in the book Journey to Justice: Finding God and Destiny in Darkness (Equip Press, 2019).