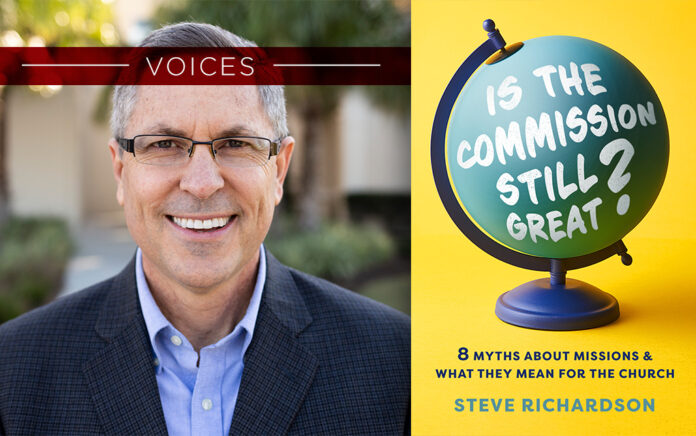 Jesus commissioned his people to bless the nations. Even in traditional cultures, I’ve never personally met someone who wished missionaries hadn’t come. I’ve met thousands of people who are thrilled that missionaries brought a message of salvation and hope.

From your perspective as the leader of a sending agency, how is the missions landscape changing? How does that impact the Western church’s involvement?

I have no doubt we’re living in the most exciting era of Great Commission advance. The growth of the worldwide evangelical church over the last 2,000 years is nothing less than astonishing. The World Christian Encyclopedia estimates that evangelicals have grown from 112 million to 386 million in just the last 50 years. By the grace of God and the sacrificial efforts of many of his people, the missionary endeavor has been hugely successful. The current chapter of global missions is being shaped by two important developments.

First, the makeup of the global church has changed dramatically. A hundred years ago, the statistically average Christian was a 47-year-old British man. Today, she is a 24-year-old Nigerian woman. More Christians speak Spanish than English as their mother tongue.  The second major development is the church in the Global South’s growing Great Commission engagement. For example, one Brazilian church has committed to sending out 400 missionaries. An African mission organization has 700 workers in 36 countries. Pioneers teams now include missionaries from about 80 countries. Mission is not about Westerners reaching the rest of the world. It is about a truly global church fulfilling her global mission.

These two overarching factors don’t imply that Westerners have no part to play anymore. Jesus gave the Great Commission to the entire church. He didn’t include an opt-out clause for Westerners or any other subset of the body of Christ. The only expiration date is his return. Western Christians must re-examine our best contributions in light of the growth of the church in other parts of the world and the increased opportunities for partnership. As we encourage each other, sharing resources and collaborating in strategic roles, we will see even more kingdom breakthroughs.

How might you respond to someone who rejects international missions as harmful or obsolete?

If your picture of international missions is Westerners imposing their religion and way of life on isolated tribes, then I have good news. Missions isn’t like that today, and I’m skeptical that it ever was, except perhaps in rare instances. The vast majority of cross-cultural missionaries today aren’t even from the West—they are Asian, African and Latin American. Most of them work in large cities already swirling with foreign ideas and worldviews, not remote jungle tribes.

Jesus commissioned his people to bless the nations. Even in traditional cultures, I’ve never personally met someone who wished missionaries hadn’t come. I’ve met thousands of people who are thrilled that missionaries brought a message of salvation and hope. You can hear some of those testimonies and my family’s story in a video called Never the Same, available on YouTube.

Remember, the spiritual lineage of very Christ-follower in the world today—even those in the West—connects back to a missionary at some point in our history. Jesus instructed us to share that blessing with those who don’t know what He has done for us, and for them. The task is huge, and all good ideas are welcome in the missions endeavor, so long as they are offered in humility with the goal of sharing the gospel with all peoples. If you see a better way to fulfill the Great Commission than traditional methods, come join us.

What advice would you give to a church leader who wants to see their congregation become more engaged with the Great Commission? What’s the best way to instill in them a vision for the world?

There’s truth to the saying, “Where there’s a mist in the pulpit, there’s a fog in the pew.” Missions-minded churches need passionate, informed pastors who model Great Commission priorities. I recommend that every senior pastor make it part of their budget, schedule and job description to go on a mission trip at least every two years, visiting a variety of cultures around the world.

Pastors also have an opportunity to preach the Word in the context of God’s overarching redemptive narrative. Missions is not an afterthought in the Bible, and almost any sermon can include illustrations representing the global church and the global need. That will help church members begin to understand that they are part of more than just their local context.

Many great tools are available to get church members talking and learning about missions, including the Perspectives course and a free small group study that goes along with my book (www.Pioneers.org/Myths). And of course, highlighting the ministries of missionaries your church supports will help to make the Great Commission personal. Security concerns can complicate that, but with a little creativity, you can help your church see how they are connected to what God is doing all around the world through all of his people.