Home Features The Choice We All Must Make 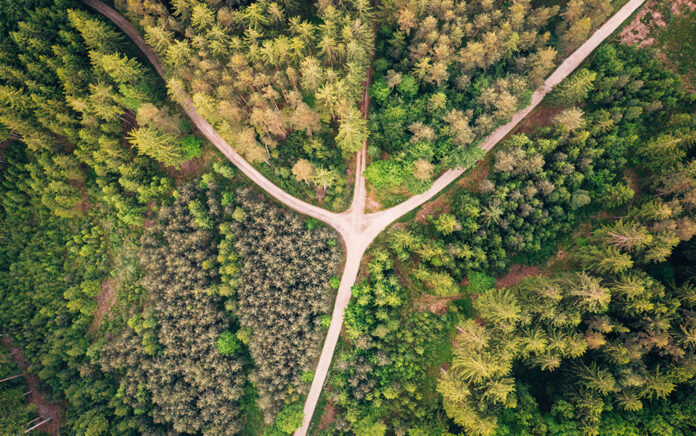 You Can’t Walk Two Roads at One Time

Without a doubt, one of the most common criticisms of Christianity today is that it’s too narrow. “You’re too narrow minded,” people say when Christians point out that Jesus is the only way to know God. “That’s so narrow and bigoted. That’s so insensitive.”

It’s probably the worst criticism that can be leveled at someone today. However, when I claim that Jesus is the only way to God, I’m not saying that I am better than other people or look down on them in some way.

The reason Christians believe that Jesus is the only way to God is because Jesus said it: “I am the way, the truth, and the life. No one can come to the Father except through me” (John 14:6 NLT).

If I claim to be Jesus’ follower and believe his words, then I would be less than honest if I said anything but this. As a Christian, I am not better or superior to any other person. I’m just one beggar telling another beggar where to find food.

Yet there are those who say they believe that all religions basically teach and say the same thing. People who make statements like this usually haven’t looked into any religious belief system. It’s simply a convenient way for them to write it off by saying that all roads lead to God. It’s their way of not having to deal with it.

Others will assert that if someone is sincere in what they believe, then they’ll get to Heaven. This is so typical of the thinking today. We operate by our feelings. If we feel good about something, if we’re really sincere, then that’s OK. That’s good enough.

Let’s say, for instance, that you boarded a plane and were settling in for the flight when the pilot announced, “Good morning, and welcome to flight 239 with service to Honolulu. Our cruising altitude today will be 35,000 feet. And by the way, I’m not so sure about this whole fuel thing. It doesn’t appear as though I have enough for us to get to Hawaii. But I want you to know that I feel good about this, so there’s no need to panic. And by the way, folks, I’m not going to use any of my navigation systems or maps, because I feel like these are so narrow and bigoted, so absolute. I believe that we can just flow with it, because all ways lead to Hawaii. So have a good flight, and don’t worry, because I’m very sincere in what I’m saying.”

What would you think about taking that flight? You’d be saying, “Get me off this plane right now!”

However, in the things of God that have eternal ramifications, people will make similar statements. It may come as a surprise to a lot of people that not all belief systems can be true. Every belief system is different, and they largely contradict one another.

Also, it’s illogical to say that if someone is really sincere, then that’s all it takes. But if we’re going to say that to get to Heaven, all we have to do is be sincere in our beliefs, then we should expect to see everyone there.

Of course, this is ridiculous. We have to draw the line somewhere, don’t we? Yet we’re so afraid to say there are absolutes, there is right and wrong, and there is good and evil. We want to believe that all roads lead to God and whatever path we choose eventually will get us there.

Even though it might be a nice thing to say that all belief systems are true, it just doesn’t work. They don’t teach the same thing. And they don’t offer us the assurance that we will get to Heaven.

In contrast, the Bible teaches that God created us in his own image, He loves us, and He wants to have a personal relationship with us. The Bible teaches that Jesus Christ died for our sins, and if we will turn from them and follow Him, then we can be forgiven and have the hope of Heaven.

Jesus asked His disciples a question in the first century that we still must consider in the 21st century: “Who do you say I am?” (Mark 8:29 NLT).

We ultimately have to determine whether Jesus is who He claimed to be or whether He was a fraud. Concerning this, C. S. Lewis said, “You must make your choice. Either this man was, and is, the Son of God: or else a madman or something worse. You can shut Him up for a fool, you can spit at Him and kill Him as a demon; or you can fall at His feet and call Him Lord and God. But let us not come with patronizing nonsense about His being a great human teacher. He has not left that open to us. He did not intend to.”

You can’t walk in two directions at the same time. You have to choose which way you’re going to walk. The same is true when we come to the message of the gospel. We have to say yes or no to it. Either we’re in or we’re out. Either we are for or we are against Jesus Christ. We must make a choice.