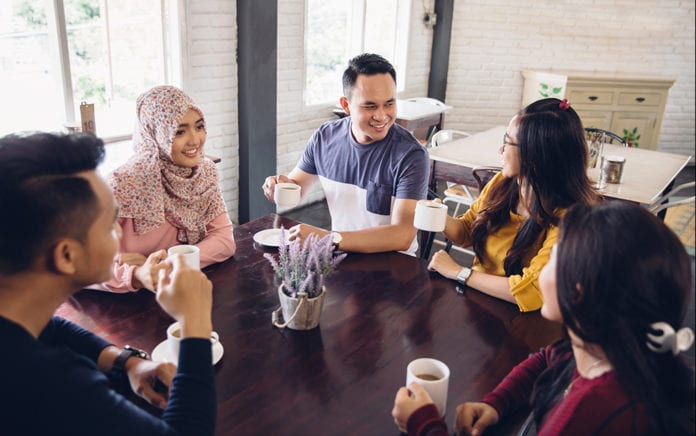 Neighborly Faith is encouraging dinner and dialogue between Muslims and Christians.

In December 2018, families from Vintage Church’s North Raleigh campus shared dinner with Muslim families at the North Raleigh Masjid, which runs out of a strip-mall and doubles as a mosque and community center. Most of the 25-plus attendees from Vintage had never stepped foot in a Muslim space before; they displayed a nervous excitement as they walked through the doors. Sabina, our host for the evening, warmly greeted each family and graciously reminded them to remove their shoes before entering the large prayer room where we would be eating.

The initial awkwardness of eating in a Muslim prayer room was short-lived. Smiles, laughter and compliments about the food filled the room. From time to time, members of the Masjid went to the front of the room to pray, which Vintage families found fascinating. Feedback on the dinner was very enthusiastic from both sides. Vintage attendees were eager to have dinner with families from the Masjid again.

Although this story may seem unique, we have discovered that Vintage Church is not alone in befriending its Muslim neighbors. Many churches and their leaders are recognizing the new opportunities for witness in an increasingly diverse world. Rather than retreating from this new context, they are leaning in.

America’s cities, towns and neighborhoods are increasingly religiously diverse. People of other faiths or no faith at all are moving in next door. This has provided a wonderful opportunity for outreach: So many of our new neighbors are eager to become friends with Christians. Why not take them up on it?

After all, Jesus has called us to obey his Great Commission (Matt. 28:16–20) to make disciples and his Great Commandment to love others (Matt. 22:36–40). We have come to see that we can follow both by pursuing genuine friendships with people of different faiths. Many of these friends are happy to talk with us about faith. And, now more than ever, they are in need of our love.

Responding to Popular Mistrust of Muslims

Negative stereotypes about Muslims abound in America now more so than ever before. Recent polling by Lifeway and Pew have discovered that white evangelicals are by far the worst offenders. In the eyes of our Muslim neighbors, this makes Jesus look really bad.

From Outreach Magazine  Looking for the Least of These

What certainly does not help is that many Christians do not know a Muslim and many Muslims do not know a Christian. Indeed, what we know about one another we are learning on TV—a medium where Muslims and Christians alike are misrepresented. We believe it’s time we take responsibility for our witness to them by getting to know the ones living in our cities and letting them get to know us.

After years of facilitating gatherings with Christians and Muslims, we see no reason to pretend that all faiths are the same. Christians do not need to have anything in common with Muslims for us to love them. This is not to say we have nothing in common—we are all created in God’s image. Nonetheless, we are inspired to mimic the love of our Creator who loves those who are unlike himself.

We are often asked about what our plan is to evangelize our Muslim neighbors. We love this question because it reminds us of what is most important: that we should be disciple makers with an eternal perspective as we labor in our communities.

What we have consistently found is that our Muslim neighbors invite conversations about faith. They want to talk about their faith and ask about ours. We get to share about Jesus and salvation in a way that feels genuine and is in the context of friendship. Should we abandon these relationships because we haven’t converted our friends? Should we give up making new Muslim friends because they haven’t converted? To us it seems our only alternative would be to retreat into our Christian bubbles, which we do not find compelling.

A New Generation of Leaders

Many Christians, especially young ones, are leaning into this new avenue for witness. With mosques and temples popping up in their cities, they are capitalizing on the opportunity to become known as good, caring neighbors. It can be as simple as inviting families from a local mosque over to their church or home for a meal. As with Vintage Church in Raleigh, it can feel awkward at first but then becomes very enjoyable.

From Outreach Magazine  The Value of Learning to Lead Under Pressure

In 2017, we launched a ministry called Neighborly Faith to invest in young evangelicals who share this vision. For over a year we’ve run a weekly podcast that provides guidance for pastors and emerging leaders. This year, we’re training and funding a cohort of 10 students at various Christian colleges to invite Muslims to visit them on campus. Fellows will help their peers overcome fears of Muslims, while building relationships with Muslims who may not have Christian friends.

We’ve had American Muslims tell each of us that we’re the only Christian they know. Some say they previously thought all evangelicals hated them. Many have had negative experiences with Christians in the past. I (Chris) had one Muslim leader tell me: “I’ve spent years trying to figure out why evangelicals are so anti-Muslim … I think it’s a part of their faith.” As Christians, we should be known for our love, not our fears. We take heart in knowing that our fears were accounted for when Jesus said, “Take heart; I have overcome the world” (John 16:33). In Jesus’ words, we find the courage and the confidence to love our Muslim neighbors as ourselves.

For more information go to NeighborlyFaith.org.