Home Features Coming To Our Senses, Coming To God 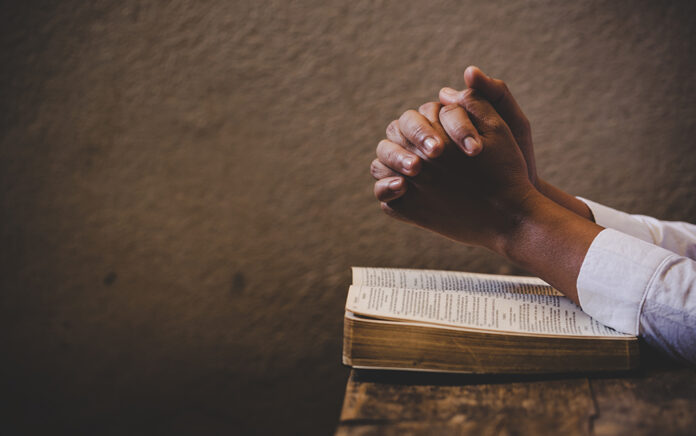 Earlier this spring, all four members of our family contracted COVID-19. I was the last to get it, and it hit me the hardest. After a week of symptoms, it led to shortness of breath, the discovery of a blood clot on my lung, and a night in the ICU. Earlier I wrote about how my scary hospital visit formed me spiritually, including how the healing touch from a nurse’s back rub left me weeping.

After a handful of months, I’m almost back to full health. My sense of taste returned after a few weeks, but my sense of smell took a few months longer. Finally, on a run on a brisk Saturday morning in May, I caught a whiff of a lilac bush as I brushed past. I stopped and spent the next several minutes walking around the park and leaning in to catch the scent of every tree, bush and flower I could see, delighting in God’s creativity. It ruined my run, but made my day. When I returned home, I stuck my nose in a bag of freshly ground coffee and took one long, slow inhale. Glorious.

The return of my taste and smell, and the experience of living without them for a time, led me to ponder the importance of our senses in the Christian faith. I reflected upon how Jesus engaged the world through his own senses—and how he encouraged people to engage with their senses to in order to experience the reality of the kingdom.

On several occasions, the gospel writers record that Jesus saw the crowd and had compassion on them. He placed his hands on lepers, blind people, and dead girls, and appropriately touched children—a sign of blessing in first-century Judaism. Quoting from the prophets, Jesus told his disciples they have eyes but they cannot see, and ears but they cannot hear. He enjoyed meals with his disciples—on the shore of Galilee, at the house of Matthew, and at the wedding at Cana. And no doubt, Jesus smelled fresh baked bread, pressed olives and the pungent odor of the feet of his disciples when he stooped down to wash them.

Thomas made the brazen statement that he wouldn’t believe Jesus had risen from the dead unless he could see the nail marks with his own eyes, put his finger where the nails were, and put his hand into the side of Jesus. When Jesus appeared to his disciples he didn’t prove the resurrection to Thomas by reviewing doctrinal statements of his deity or reminding him of the points of his teaching from the Sermon on the Mount. Instead he encouraged him to use his senses.

During the last supper Jesus shared with his disciples all five senses were purposefully engaged: the smell of fresh baked bread, and the glug-glug-glug as wine was poured into the cup. His disciples saw him break the bread and felt as it was handed to them, and ultimately tasted its goodness. Even for us today, as we gather around the Table, it is a tactile reminder of the sense-oriented experience of forgiveness, salvation and redemption.

Our five senses are powerful and woefully underrated. Researchers have discovered people can detect at least one trillion distinct smells—and we can even smell fear and disgust. Swedish scientists found that the human finger can decipher between surfaces with ridges as small as 13 nanometers. And the human ear continues to hear sounds even as we sleep. Our senses can be tools and vehicles which usher us closer to our creative God and his vast, vibrant and textured world. Thus, engaging our senses fully is an invitation to a sensual faith.

But for many followers of Christ, even that word sensual is awkward, provocative—scandalous, even. For centuries Christians have been nervous about the embrace of our senses—the Puritans are one striking example. Many today worry that an emphasis on a sensory-oriented faith experience could lead to trusting our emotions too much, or that a sensual faith could lead easily to a sexualized faith. We often speak pejoratively about Christians or churches that engage in “smells and bells.” But the origin of these traditions is rich, and its intent rooted in directing our embodied lives back to the God who created us and graciously offered us these sensory gifts.

In a recent Christianity Today piece, Jennifer M. Rosner reminds us that the Jewish faith embraces an embodied spirituality where people actually live out faith through their physical bodies. She quoted Jewish historian Daniel Boyarin who stated, “Christianity has generally conceived of human beings as embodied souls, while Judaism has conceived of human beings as ensouled bodies.” We often need reminding that it was Torah which taught Jews, (including Jesus) how to order their lives, which ultimately taught them to use their own physical bodies. The irony is that many Christians today believe in and talk about the incarnation of Christ, yet live an excarnated existence. To seek God yet keep our senses at arm’s length is incongruous. Discipleship is always bodily.

But how are we to engage with God and live incarnationally by engaging our senses faithfully?

We see throughout Scripture how using our five senses helps us make sense of God. Think of the Psalmist who stated, “Taste and see that the Lord is good” (Ps. 34:11). The Message translates part of Jesus’ words in the Sermon on the Mount as: “You’re here to be light, bringing out the God-colors in the world.” The Old Testament includes God’s specific instructions of the construction of the tabernacle and the Temple.

As we read the Bible with a sensory-oriented posture we can engage in imaginative question asking. It was Leonard Sweet who first taught me to ask sensory questions of Scripture:

What did the garden of Gethsemane smell like?
Just how tasty might the food in the garden of Eden have been?
What did the disciples voices sound like when they sang a hymn together? Do you think Peter was off-key?
What did the bread and fish taste like at breakfast on the shore of Galilee (John 21:12–13)?
What did it feel like for Jesus to touch the eyes of the blind man outside of Bethsaida (Mark 8:22–25)? Were they smooth, or tough and textured?

One of my favorite questions I like to ask in a conversation, or when teaching my students: What does God smell like?

We have permission to ask new—and potentially uncomfortable— questions. Engagement with Scripture is different when you approach it with a posture of wonder, curiosity and imagination. New questions lead to new insight and new encounters in faith.

Additionally, engaging our senses helps us to become more aware of them in order to embrace them appropriately. If we were to ask people when they sense God’s presence most deeply, we may hear answers such as: When I am out in nature. When I am drinking a cup of good coffee. When I hear Debussy’s Clair de Lune played on the piano. At the communion table. When I am embraced by those who love me. Oftentimes their deepest experiences with God already involve our senses.

Prayer can be a full-bodied sensory experience as well. When our church gathered recently, we were encouraged to stand up and offer praises to God by looking up, extending our hands upward, and expressing our voices loudly and exuberantly. Then we were instructed to stand facing outward, confessing our sin (aloud or silently) and then turning around 180 degrees toward the center as a physical act of repenting and turning back to God. We could hear people’s praises and confessions, we could see people’s hands extended, we could feel the physical pressure on the soles of our feet as we stood and turned around. Yes, we could have remained seated and reflected silently while we prayed. But to stand, extend our hands, and say it aloud helps us to embody our prayers in ways that cultivate opportunities for deeper, more experiential connection with God.

Leaning in to the God who created our senses can also embolden us to be more creative in corporate worship. Several years ago, when teaching on Jesus as the Bread of Life, we borrowed a dozen bread makers and had them baking throughout the auditorium before the service. We scheduled them so the loaves finished baking when people first arrived. The congregation smelled the sermon before they heard it—and then we ate it during communion. What could be more welcoming than to come to the table of forgiveness and receive bread still warm?

During Advent one year, we distributed frankincense and myrrh throughout the service to smell the gifts from the Magi? (We thought it would be wise to refrain from handing out gold). On another occasion, we invited a deaf woman in our community to sign the Lord’s Prayer as we reverently stood and watched her in complete silence, entering into her reality. You may consider interviewing someone who has lost one of their senses (someone visually impaired or colorblind, or an individual who lost their sense of small or taste with COVID) and ask them reflect on what it is like.

I’ve also learned to praise God specifically for my senses. When was the last time we thanked God for the ability to taste and smell? Up until my bout with COVID I had never thought of doing such a thing. Now, I find myself thanking him for these gifts frequently. What if the whiff of that lilac bush on my run in the park is actually what God smells like? What would it look like if we devoted time to be still and ponder the goodness of God we experience through each of our five senses?

There are numerous ways to experience God in new, fresh and surprising ways if we will have the courage and intention to embrace our senses rather than eschew them. May we taste and see—and hear and touch and smell—that the Lord truly is good.