Home Features The Myth of the ‘Undeserving’ Poor 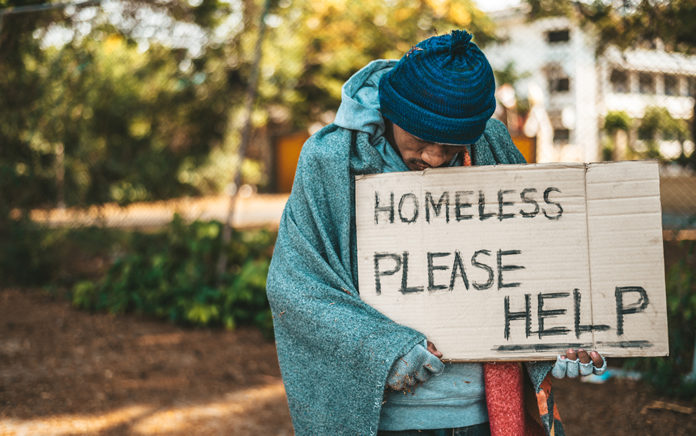 My neighbors were evicted yesterday.

I came home to find their worldly belongings—a couple of dirty sheets, a filthy pink pillow and assorted clothing—piled in a puddle outside my front door.

They had previously been living crammed together in one of the tiny, windowless rooms that line our alleyway.

Apparently our landlord (the same tough old lady owns a bunch of the housing around here) decided that their drunken arguments were too much to put up with. So mother, father and four kids ranging from ages 1 to 12 were thrown out on the street. They were gone before I even realized it.

But here’s the dilemma. There’s no doubt that the mother’s relentless drinking and fighting contributed to the situation they now find themselves in. She was hard to like and even harder to help. She neglected her kids in order to sit drinking and playing cards with the neighbors. She would scream at her daughters when they forgot to cook the rice or wash the clothes, while she sat around doing nothing.

So, why should I help her?

Have you ever noticed that there’s something in our human nature that seeks to divide people on the margins, into the “deserving poor” and the “undeserving poor?”

On the one hand, a trash-talking alcoholic who neglects her kids in order to play cards all day is easily deemed “undeserving.” While the four innocent children affected by her behavior are clearly “deserving.”

I bet I could raise a ton of money to help those kids. But I’d be hard-pressed to get folks to open their wallets to help that woman.

Interestingly, Jesus dealt with this problem.

In those days, disability and poverty were viewed as the result of sin. Much of the world today believes this way. It’s called karma—the idea that your sins in previous lives directly impact this life. But Jesus rejected that analysis.

“As he went along, he saw a man blind from birth. His disciples asked him, ‘Rabbi, who sinned, this man or his parents, that he was born blind?’ ‘Neither this man nor his parents sinned,’ said Jesus, ‘but this happened so that the work of God might be displayed in his life.” —John 9:1–3

Jesus is making it clear that God’s work in transforming lives is more about God’s love than whether the beneficiaries are deserving or not. For no one is worthy. That’s why we need God’s grace.

From Outreach Magazine  5 Tips for Expanding Your Online Sermon Audience

In Matthew 25, Jesus does not categorize people based on whether they had sinned … or not. Nor did he judge them by whether they had already had multiple chances … or not. His call was simply to reach out to those whose needs are unmet and love them: “I was hungry. I was thirsty. I was unclothed. I was in prison. I was sick.”

So, here are three principles to keep in mind as you engage with those who might be viewed as “undeserving” in your own life and ministry:

1. Extend the Same Grace You Have for Yourself to Others.

The words of Jesus, “Do unto others as you would like them to do unto you” are beautifully applicable in this situation. After all, we all have sinned and fallen short of God’s standards for our lives. If we measured how much each of us deserve grace, forgiveness and love, you and I would both fall short.

When I talk about extending grace, some assume that I am saying we should ignore sin. They wonder if I am advocating that we “enable” people in their destructive behaviors. Please hear me clearly on this: I am not advocating enabling anyone. I am passionate about transformation. But I recognize that:

I don’t know what demons my neighbor is seeking to escape. I don’t know what trauma or abuse she has suffered at the hands of others. I don’t know how her mother raised her (or more likely didn’t, since much of her childhood would have been during the Khmer Rouge years). I don’t know her enough to judge her. Only God does. So my role is simply to love and serve, and pray for change.

2. Seek to Understand, Rather Than to Judge.

I find it so tempting to judge. We’re quick to label those we view as undeserving, using terms like “welfare queens,” “dole bludgers” and “layabouts.” And in doing so we judge them unworthy of our love and effort.

I don’t believe this type of mean-spirited attitude reflects the love of Jesus.

Instead, seek to understand what happens at an individual level to a person who is demoralized, engaging in destructive behaviors, or seeking to meet their needs in unhealthy ways.

Marshall Rosenburg’s work on nonviolent communication has revolutionized my thinking about why people behave destructively, with the simple idea that everyone has valid needs. But we don’t always use healthy strategies to meet those needs.

For example, a person who drinks themselves into a coma every day may have a valid need for companionship and healing from the pain of their life. But their strategy to meet those needs (excessive drinking) is not healthy.

Secondly, seek to understand the systemic reasons for poverty and how people end up being marginalized and shut out of the system (and thus demoralized and engaging in destructive behavior).

From Outreach Magazine  A Depressed Pastor Navigates the 2020 Blues

For those of us from privileged backgrounds, seek to understand your privilege, so that you can then understand poverty better. Recognize that it is much easier for someone with resources to get help with an addiction or hide the problem. This is a blind spot for most people from affluent and educated backgrounds, but it’s absolutely crucial that we engage in this kind of hard thinking, or we will end up doing more damage.

How can I best extend God’s love to this person today?

What action will be the most loving and transformational in this person’s life?

These questions invite us to step away from judgment and towards transformation. These questions allow us to respond with the kind of grace Jesus first offered to us.

One night a couple of weeks ago, I heard the sound of sobbing outside my front door.

I switched on the lights and opened the door to find my alcoholic neighbor lying shivering on the ground, weeping and moaning. She’d had too much to drink and was nursing a swollen eye. She’d had another argument with her husband and was settling down to sleep it off outside. To top it off, she was in the advanced stages of her pregnancy.

Not a great combination.

I kneeled down beside her, trying to avoid the filth she was lying in: rat’s droppings, trash and mud.

And I listened to her talk about her problems for a while.

She was at rock bottom and she knew it. But she couldn’t see a way out.

From almost any perspective, people could easily label her “undeserving.” The list of her sins would be almost as long as the list of my own. But I know God doesn’t see her in those mean-spirited categories. He only sees a beloved daughter who desperately needs love, and grace, and forgiveness, and transformation.

My calling in that moment, and in every interaction with her since, is simply to extend love and grace, and try to help her find a better pathway.

I know that Jesus can heal her and set her free.

She may not be what most folks would think of as “deserving.” And neither am I.

And that makes us the perfect candidates for grace.

This article originally appeared in 2015 on CraigGreenfield.com and is reposted here by permission.