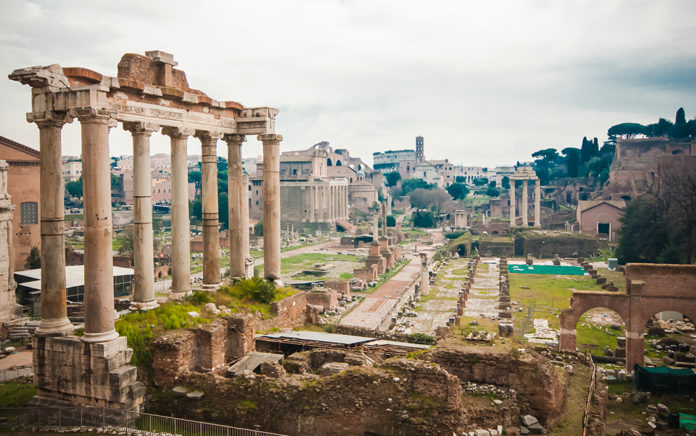 Conspirata is a sequel to Robert Harris’ novel Imperium, which chronicles the rise of Cicero in ancient Rome. Harris is a great novelist, and he sticks to the facts and to the actual speeches of Cicero as much as possible—which is what make this book so valuable. You feel you know these people afterwards. Conspirata […]

Conspirata is a sequel to Robert Harris’ novel Imperium, which chronicles the rise of Cicero in ancient Rome. Harris is a great novelist, and he sticks to the facts and to the actual speeches of Cicero as much as possible—which is what make this book so valuable. You feel you know these people afterwards.

Conspirata tells of Cicero’s consulship in which he ruled over the Roman Empire for a brief period, his work as a senator, and his brilliance as a lawyer and orator. It’s impossible to recommend this novel too highly; I loved it.

I was struck by the conditions in Rome at this time (the story begins in 63 B.C.). Keep in mind that this was the most civilized and progressive society known to Western man at the time. We still speak of “the glory that was Rome.” It was glorious, but only to a point, and depending on the strata of society you occupied.

Into this world, Jesus Christ was born. Into this culture the gospel came. To these people, God sent a Savior.

Read what Robert Harris said about these people and think, Man, did they ever need a Savior!

“Such was the state of the city on the eve of Cicero’s consulship—a vortex of hunger, rumor and anxiety, of crippled veterans and bankrupt farmers begging at every corner; of roistering bands of drunken young men terrorizing shopkeepers; of women from good families openly prostituting themselves outside the taverns; of sudden conflagrations, violent tempests … and scavenging dogs; of fanatics, soothsayers, beggars, fights.” (p. 7)

Superstition pervaded every aspect of life. When the Senate convened, before any business was enacted, priests performed rites in order to determine “the auguries,” or supernatural signs. The flights of birds or lightning flashes were interpreted as warnings or encouragements.

As Cicero and his entourage moved across the city, they ignored the beggars on every street and stepped around the dead bodies, victims of violence or starvation the night before.

There was no lack of religion. Most of it was composed of nine parts superstition and one part reality. Before major civic events, a bull was sacrificed on an altar, then disemboweled. Its entrails were strewn out on the altar for inspection before the poor animal had died, as the priests looked for omens that the signs were right to proceed with the events of the day.

From Outreach Magazine  The Comforting Reality of God’s Providence

The city was filled with temples and altars to various gods. Cults of priesthoods were a part of everyday life in Rome.

The biggest event of anyone’s year—possibly his entire life—was to witness a “triumph,” a celebration covering several days to honor a Roman general who had led his army to major victories in foreign lands. War existed as a fact of everyday life for Romans. They were always fighting someone.

Harris describes the triumph given to Ptolemy the Great after his victory over Mithridates and the Armenians.

Into the city marched the Roman legions, followed by wagons bearing booty captured in the foreign conquest. Miniatures of temples and palaces were carried by slaves to show Romans the wealth they had acquired. Wagons were loaded with crowns and thrones, jewels and statues. Eventually, the defeated king and his family would follow, shackled and down-hearted, and they in turn by their subdued armies. Finally, the hero of the day, the general himself, would ride in on a chariot pulled by white horses. On the chariot behind the hero rode a slave, whispering to him underneath the cheers of the crowds, “You are only human. You are only human.”

At the conclusion of the triumph, the defeated kings and their armies were slaughtered. Mercy was a rare thing, and frequently seen as weakness.

To a culture that placed little value on human life, “God so loved (everyone) that he gave his only begotten Son.”

To a people who esteemed the successful and wealthy and disdained the poor and lowly, God sent a Savior who would turn their system of values upside down. “Blessed are the poor,” Jesus would say.

From Outreach Magazine  When You as the Leader Are the Obstacle

To those who lived for glory and saw fame and celebrity as the highest goals to be attained in this world, God sent his Son to say, “Whoever would be great among you, let him be your servant.”

To those who condoned slavery and took these wretched souls as instruments to be used and discarded, God sent one to “set the captives free.”

To those who hated their enemies and looked forward to killing those they conquered, God sent his Son to show mercy and extend mercy.

To a world that thought of greatness as dominating large masses of people, this Son of God taught a way of lowliness and service to others.

To those who amassed great wealth and loved to put it on display, this Savior said, “A man’s life does not consist of the abundance of things he possesses” and “freely you have received, now freely give.”

Furthermore, Rome was better than most of all those other societies and cultures.

You can only imagine what the other people did.

You can only imagine the difference the gospel of Jesus made there.

For good reason, they followed him and rejoiced to see him put the high and mighty in their place.

For good reason, they wept when he died and rejoiced when he rose, and believed on him the first chance they got.

We who are followers of Jesus must be careful to live by the standards he set and the instructions he gave. We must not be caught up in the world to adopt its ways, otherwise it was all for nothing.