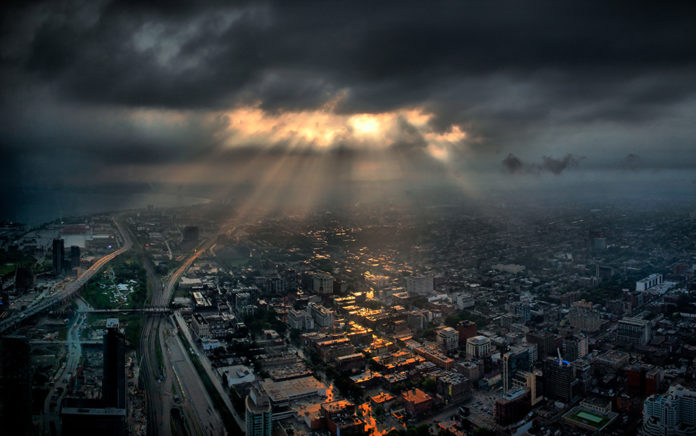 This series of articles (Read Part 1) contends that the Bible is set in the land of wild things. That is, the Bible is more fantastical—beautiful, dangerous and strange—than we give it credit for. What we incorrectly call the natural and the supernatural, as if they are distinct and isolated realms, are actually part of […]

This series of articles (Read Part 1) contends that the Bible is set in the land of wild things. That is, the Bible is more fantastical—beautiful, dangerous and strange—than we give it credit for. What we incorrectly call the natural and the supernatural, as if they are distinct and isolated realms, are actually part of a single, fascinating and intertwined world. In the Bible, heaven and earth are constantly interacting and alive with all kinds of creatures, forces and powers—both seen and unseen.

What are these powers? What do they do in the world? How do they operate? How do they relate to God, to humans, and to the story of rescue and redemption the Bible tells? It’s past time we reengage the Bible’s overlooked story of the powers.

What’s wrong with the world?

Humans have certainly lost their way. The overt story of the Bible is about divine image-bearers refusing to fully step into their fundamental vocation. Humans, made to reflect God’s purposes for the world, have instead become agents of creation’s undoing. This is central.

But there’s more. Alongside the storyline of people behaving badly there is one about another group of powerful creatures who’ve gone wrong. These two storylines are deeply intertwined and overlapping, each one influencing the other.

Two passages from the Psalms help us get our bearings on these other creatures, the powers:

“The heavens will acclaim your wonder, O LORD,
Your faithfulness, too, in the assembly of the holy ones.
For who in the skies can compare to the LORD,
who can be like the LORD among the the sons of the gods?
A God held in awe in the council of the holy,
mighty and fearsome above all his surroundings.
LORD, God of Armies, who is like you,
powerful Yah, with your faithfulness round you?
—Psalm 89 (The Hebrew Bible, Robert Alter)

These “sons of the gods,” these “armies” and “holy ones,” constitute the heavenly council or assembly. They are clearly powerful spiritual beings, yet they are not equal to the Lord who is mighty and wonderful above them.

The collection of psalms about God’s enthronement as High King (Psalms 95–99) regularly reference the one true God’s place above all other gods. The gods of the nations are but idols, falsely claiming that they are due worship. Yahweh alone is truly Lord Sabaoth, the Lord over the Hosts.

But then we learn another crucial piece of information:

“God takes his stand in the divine assembly,
in the midst of the gods he renders judgment.
‘How long will you judge dishonestly,
and show favor to the wicked?
Do justice to the poor and the orphan.
Vindicate the lowly and the wretched.
Free the poor and the needy,
from the hand of the wicked save them.
… As for me, I had thought you were gods,
and the sons of the Most High were you all.
Yet indeed like humans you shall die,
and like one of the princes, fall.’”
—Psalm 82 (The Hebrew Bible, Alter)

Wait a minute. Aren’t humans the ones who judge dishonestly and neglect the poor? Isn’t it wicked human rulers who fail to care for the needy and in fact oppress them?

From Outreach Magazine  Leaving the Past Behind

Again and again the prophets enter charges against people failing to do justice. Yet here we see God directly assigning blame to the world’s spiritual powers for the injustice that takes place on earth. He renders judgment against them, even saying these gods will die.

Fallen humans are responsible for the world’s evil.

Fallen spiritual powers are responsible for the world’s evil.

The Bible says yes to both of these statements.

THE DEEP CONNECTION BETWEEN HUMANS AND POWERS

It helps to put the biblical pieces together to understand how this works. In Daniel 10–12 we see an angel responding to Daniel’s fasting and mourning with a crucial message. “The prince of the kingdom of Persia” and “the prince of Greece” are in active warfare against this angel and also against “Michael, the great prince who has charge of your people.” Angelic powers and nations go together—indeed, they seem bound together in some essential way.

We know from the regular prophetic denunciations against injustice that human institutions and systems are implicated, including such things as the way the law courts work and how economic structures function to favor the rich and harm the poor. So the entire realm of human cultural power is now tied to dark spiritual powers.

This, in turn, leads the Lord of the heavenly council to combine his judgments against both parties. So in Isaiah we see Yahweh showing up with punishment on his mind:

“On that day the LORD will punish
the host of heaven, in heaven,
and the kings of the earth, on the earth.
They will be gathered together
as prisoners in a pit;
they will be shut up in a prison,
and after many days they will be punished.”
—Isaiah 24

Notice the strong emphasis on one party working in heaven, while the other operates on the earth. They are operating in different, but connected, realms. Destructive evil is their joint accomplishment.

From Outreach Magazine  5 Ways Stress Impairs Your Ability to Lead

The running of the world—the world in rebellion to God—is not merely in the hands of presidents, prime ministers and kings. It is equally governed by the angelic rulers of the heavenly assembly, the world rulers of this darkness.

The biblical evidence points toward created angelic beings who were given their authority by the Creator. They were meant to serve under God and facilitate his purposes for a well-ordered world. Their delegated rule was misdirected, however, particularly when they began to accept the idolatrous worship of humans. They became powerful forces for evil, for ruining God’s good creation.

Daniel has visions of wicked kings on earth who appear as terrible beasts coming up out of the sea (the regular home of chaos monsters in the Bible). These human kingdoms, working in concert with the powers, are represented as beasts precisely because they act in subhuman ways. This is another piece of biblical wisdom: When humans or angels seek to be more than they were created to be, they always end up being less.

It is perfectly appropriate, then, that the one who defeats these proud but false rulers is “one like a son of man.” A truly human one will appear, and as the representative of his now-restored people, he will be given “dominion and glory and kingdom” (Daniel 7).

Humans were made to rule as God’s deputies in the world. So God is determined that the powers be overcome and his people receive the gift of their own rule back again.

The First Testament testifies to spiritual powers which have turned false and enslaved of the world. They disrupt God’s intentions for the functioning and flourishing of the world according to true justice. They interfere with the intended role of God’s image bearers. The names and titles of these powers move straight from the First into the New Testament via the Greek translation of the ancient Scriptures, showing that these are exactly the same powers as before.

So the story awaits a new announcement, some major turning point within this narrative of God and his world. Those under the reign of the dark lords surely need some good news for a change. Something like the arrival of “one like a son of man.”

* I am especially indebted to G.B. Caird’s small book Principalities and Powers for the main outline of this series (based on his Chancellor’s Lectures in 1954 at Queen’s University).