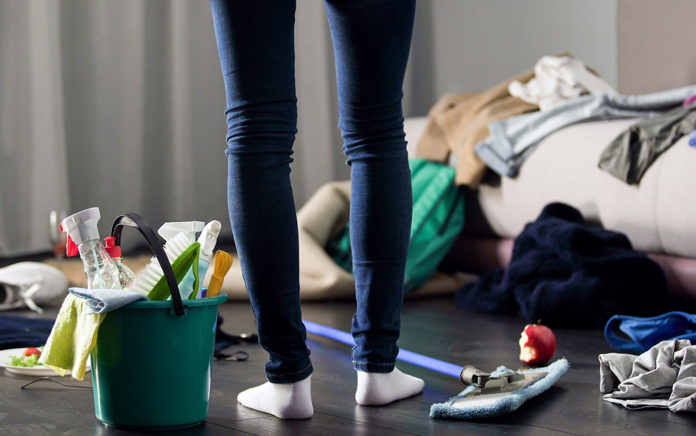 He is not daunted by your imperfections.

By nature, I am a messy person. I will admit it. But I’m married to a very tidy person. One fall day I was carving pumpkins with the grandkids, and we kind of made a mess.

My wife said, “Greg, can you clean up the mess?”

I was trying, but it was bad. So I said, “Cathe, I know my cleaning will not meet your standards. Maybe you should do it.”

I have good news for messy people, especially those who have made a mess of their lives: The Lord is really good at cleaning up our messes. He can turn our mess into a message.

Moses messed up his life big time. He was an Israelite who, through adoption, had been taken into Pharaoh’s court. Presumably, he was being trained to be the next leader of Egypt.

But Moses wanted to help his fellow Israelites and went about it in the wrong way. He killed an Egyptian taskmaster who was beating an Israelite. Then he escaped to Midian, because Pharaoh wanted to kill him.

Moses had been there for 40 years without hearing from God. And then one day, God spoke to the 80-year-old Moses through a burning bush. He said, “I am the God of your father—the God of Abraham, the God of Isaac and the God of Jacob” (Ex. 3:6).

Abraham, Isaac and Jacob are great patriarchs of the faith. But they were flawed people too. As godly as he was, Abraham had serious lapses in his faith. Isaac didn’t listen to the Lord and was biased. And Jacob? Well, his mistakes are legendary.

So I think God was saying, “Moses, I am the God of men who have failed and who need second chances. That means I can use you.”

Then God said, “I have certainly seen the oppression of my people in Egypt. I have heard their cries of distress because of their harsh slave drivers.

Yes, I am aware of their suffering. So I have come down to rescue them from the power of the Egyptians and lead them out of Egypt” (Ex. 3:7–8).

From Outreach Magazine  How Social Media Is Shrinking the Bible

God has seen, God has heard and God knows. The Bible, speaking of Jesus, tells us, “This High Priest of ours understands our weaknesses, for he faced all of the same testings we do, yet he did not sin” (Heb. 4:15).

He is aware of what you’re going through right now. God sees it, he hears it and he knows it. He cares about you.

So the Lord was saying to Moses, “You are the man. And just like this burning bush, you’re going to burn with my message.”

You would think that at this point, Moses would have fallen down on his face and said, “Thank you, Lord, for second chances!” But instead he became a human excuse machine. He said, “Who am I to appear before Pharaoh? Who am I to lead the people of Israel out of Egypt?” (v. 11).

It may sound humble at first to say you’re not worthy. But in reality, God had called him. So it was an act of disobedience.

Moses did have a point. If you were God, would you have picked Moses? Yet the Lord seems to go out of his way to choose flawed people. Maybe it’s so that he will get the glory, ultimately.

Moses learned some important lessons. In the court of Pharaoh, he was schooled in the ways of Egypt. He knew Egyptian culture, Egyptian art and Egyptian military strategies. He knew about all the Egyptian deities. All this would come in handy when he was facing off with the pharaoh.

And in the wilderness, Moses worked as a shepherd. He learned how to deal with wayward sheep. This would come in handy as he led an army of people through the wilderness for 40 years.

Moses learned why impulsiveness was a bad idea, and he learned how to wait on the Lord.

As I’ve said many times, God is not looking for ability; he’s looking for availability. God does not call the qualified; he qualifies the called. What he really wants is just for someone to say, “Lord, I’m in. I’ll go. I’ll do it if you want me to do it.”

For instance, look at the story of Gideon in the book of Judges. He seemed to be afraid of his own shadow. Yet the Lord basically said to him, “Hey Gideon, you mighty man of valor! You’re going to lead Israel out of their bondage to the Midianites.”

In the same way, God sees potential in you. Maybe you don’t. Maybe you look in a mirror and see flaws. You see shortcomings. But God sees what you will become: a mighty man or woman for him.

Yet all too often we offer the same excuse Moses did about why God would never work through us. But it isn’t based on what we deserve. It’s based on the grace of God by which he calls us.

Jesus’ last miracle was covering up the blunder of a disciple. And your failure, mistake or sin is a part of your story. Jesus can take whatever wrong you’ve done and forgive you and be glorified in your life still.