Home Features How Your Church Can Advocate for Immigrants 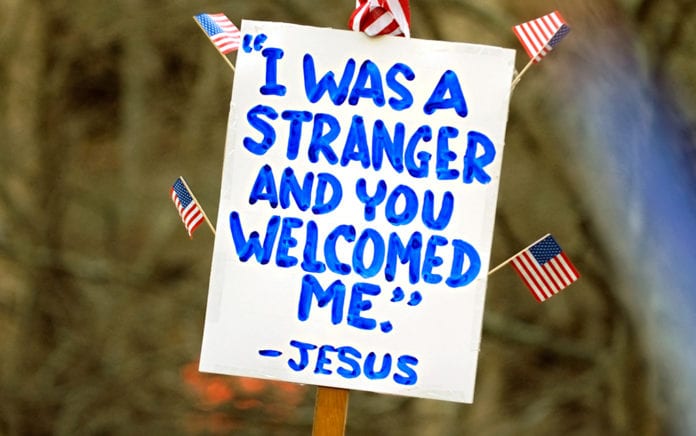 Here are five practical ways you and your church can speak out on behalf of immigrants and refugees.

Several weeks ago my wife and I brought our two young sons to a prayer vigil for a Colombian pastor and her husband who’d been detained by Immigration and Customs Enforcement (ICE). Despite having fled terrorism in her home country, purchasing a home in Chicago, completing her pastoral training, and serving a church, Pastor Betty Rendon was arrested in front of her daughter and granddaughter in her own home. She was deported in less than a month.

The experience of hearing Pastor Rendon’s testimony as relayed by her daughter and granddaughter gave me a much needed wake-up call. The constant flow of news about migrants and their struggles at our southern border is so prevalent these days that I can forget about the particular, embodied suffering these stories represent. The past couple of years have seen a political atmosphere in which refugees and migrants have been disparaged, inhumanely detained, separated and deported. Even worse, journalist Jonathan M. Katz reports that in “the last year, at least seven migrant children have died in federal custody.”

Not that this is the first time immigrants have faced such hostility in this country; the previous presidential administration was responsible for deporting more undocumented immigrants than any president before him. Nativist politics raged in previous generations, Japanese immigrants were forcibly detained in camps during World War II, and Chinese people were singled out for a law prohibiting their immigration in 1882. But even so, this moment is one in which immigrants are being especially threatened by our politics.

HOW SHOULD WE RESPOND?

What is the appropriate way for the church to respond, especially given how much attention the media has paid to the support this presidential administration has received from white Christians in particular? At the polls, from the pulpit, and among the majority in the pews of white churches, our backing—sometimes begrudging, oftentimes enthusiastic—has given cover to the slander and suffering inflicted upon vulnerable immigrant communities. We excuse the president’s rhetoric, defend his policies and call special days of prayer so that his agenda might succeed.

We? Many of us, in fact, have been horrified by what is being done to migrants and refugees who are fleeing dangerous circumstances only to be met at our border with open hostility. We are familiar with God’s heart for the refugee and the immigrant as seen in passages like Leviticus 19:33–34:

From Outreach Magazine  5 Tips for Memorizing Scripture as a Family

We understand how our country’s history of forced displacement of Native Americans, kidnapping and enslavement of Africans, and evolving views about who was considered white enough to be an American citizen undermine our moral authority to so clearly delineate boundaries and border walls. We’ve learned as well about how our own nation’s foreign policies, trade agreements, and appetites for drugs have sometimes destabilized the countries from which many of these migrants are fleeing.

And yet, is it enough for those of us who are white to simply distance ourselves from those Christians who support—tacitly or otherwise—the tragedy unfolding at the border?

The answer, when viewed from the perspective of the immigrants who find themselves on the receiving end of America’s anxiety is obviously, no. These perilous times call for courageous and visible responses from the American church, and especially from those of us who operate from places within majority-white churches and ministries.

Our God commanded his people to care for those on the margins, such as the immigrants and refugees of today. The disciples learned that offering hospitality to strangers was equivalent to welcoming Jesus himself. And our Lord’s deep concern for children must focus the lens through which we consider the many who’ve been separated from their parents at our border. Though you wouldn’t necessarily know it from the partisans and pundits who shape our immigration debates, the simple fact is that Scripture requires of us a courageous and compassionate response to those suffering at the border. What can we do?

First, we can speak boldly and regularly. The regularity of this administration’s assaults on immigrants has perhaps dulled our sensitivity. But we must not grow weary of pointing out the impact of destructive language and policies. A pastor friend of mine recently joined a group of other pastors at the border to see the crisis for himself. They met people who’ve been separated from their families. They talked with an American veteran who was deported and can only return after he dies, for his military funeral. They met with American border patrol officers who lament the brokenness of our immigration system. As you might imagine, my friend returned to his church, far from the southern border, with a broken heart and fire in his belly. He cannot help but bear witness to what he has seen.

Second, we can develop relationships with immigrant congregations who are feeling tremendous pressure. Think, for example, about Pastor Rendon’s congregation. What must their experience be like? I’m thinking as well about some immigrant pastor friends who received anonymous phone calls warning them not to attend an upcoming meeting because ICE would be present. We need to hear from these sisters and brothers to learn how best to advocate for their priorities. Because many of these churches have struggled financially as members fear coming to church, perhaps we could even tithe a portion of our budget to their ministries.

Third, we can disciple white Christians toward a more biblical understanding of this immigration crisis. Books like Welcoming the Stranger by Matthew Soerens and Jenny Yang and Christians at the Border by Daniel Carroll are excellent resources with which to engage a congregation’s biblical imagination. A recent collection of laments in Christianity Today models how the ways we pray and worship can resist partisan rhetoric with biblical imagination.

Fourth, we can engage our elected officials and call them to not only address the immediate crisis at the border but also to support immigration reform. By reminding these elected officials that you find this administration’s policies and rhetoric offensive, you are counteracting the stereotypes that American Christians are anti-immigrant. World Relief resettles immigrants and refugees and has helpful resources about how to reach out to your elected officials.

Fifth, we can look for opportunities to participate in civil disobedience. Perhaps the situation at the border won’t come to such drastic action, but at a time when even aiding undocumented immigrants who are near death is viewed as criminal activity, some of us may need to willfully disobey the laws of the land. Thankfully there are many examples of American Christians, such as those who desegregated Southern lunch counters, buses and public schools, whose footsteps we can follow.

Unfortunately, the current vitriol toward immigrants is not unique in American history. But as Christians, we must remind ourselves that behind all the news stories and statistics are real people experiencing real suffering. May we all be found faithful to the call to confront the evils of our present age with both courage and compassion.