Home Features Culture and the Church: Where God Points His Finger 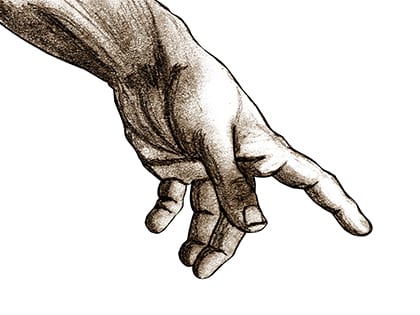 “The supreme issue for Jesus was not Rome’s army but God’s people.”

The French philosopher Voltaire once said, “If God made us in his own image, we have well returned him the compliment.”

That is what our world wants: a god in our own image, a god who will conform to our wishes and desires, a god who will fulfill our agendas. We want a user-friendly god, if you will, whom we can adapt to our chosen lifestyles.

We want religion à la carte, so we can stroll up to some celestial salad bar and pick and choose the attributes of God that appeal to us and throw the others aside. We are attracted to the qualities of God such as love, forgiveness, compassion and promise of heaven, but we recoil from such concepts as a God of holiness who loves us yet requires repentance.

In Jesus’ day that is how the people were. They wanted a deliverer and a Messiah to conform to their plans instead of his. They wanted Jesus to destroy Rome but not the cherished sins of their hypocritical, superficial religion.

Many are like this today. They will sing the praises of a Jesus who will give them unlimited wealth, success and happiness, but they recoil from a Jesus who requires obedience and commitment. Like the multitude when Jesus rode into Jerusalem on the back of donkey, they will loudly proclaim Jesus as long as they believe he will satisfy their selfish desires. In a sense, they remake Jesus in their own image. They have a Jesus they can be comfortable with.

Luke’s gospel adds this detail regarding Jesus’s triumphal entry into Jerusalem: “Now as he drew near, he saw the city and wept over it” (21:41, NKJV). What a strange contrast on this day of great joy and excitement. The Greek word Luke used to describe this weeping is strong, signifying bitter anguish as though one were mourning the dead. It was audible, loud weeping.

Why was he weeping? Jesus, being God, knew what was ahead. He knew his ministry was almost over. He knew time was short. Yet by and large he had been rejected. He had healed their sick. He had raised their dead. He had fed their hungry. And he had forgiven their sin. Yet they remained mostly distant from him. He remained alone and rejected.

Isaiah 53 said this is exactly what would happen: He would be despised and rejected among men. We are told in John’s gospel, “He came to his own, and his own did not receive him” (1:11, NKJV). This broke his heart. Here was Jesus with his own creation turning their backs on him.

Then, according to another gospel, he went into the temple, looked around, assessed the situation, and returned to Bethany to spend the night with friends. The following morning he returned. He took action and cleansed the temple.

This was righteous indignation. He came back and did a little house cleaning. He drove out the moneychangers in the temple and overturned their tables, saying, “It is written, ‘My house shall be called a house of prayer,’ but you have made it a ‘den of thieves’” (Matt. 21:13, NKJV).

This is a pretty radical thing Jesus did. These were not little, portable card tables they had set up. These were massive, marble tables in keeping with the decor of the temple. Jesus was brandishing a whip, picking up marble tables and pushing them over, sending these people running.

Why this indignation? If people wanted to pay the temple tax, there were special half shekels for the sanctuary, which they would exchange their money for. The moneychangers had inflated the prices and were ripping people off. It was just a big racket, and they were taking advantage of these people who wanted to worship God.

The militant messiah whom the people wanted would have brought an army into Jerusalem and attacked the Roman garrison known as the Antonia Fortress. That is not where Jesus went, however. Jesus went to the temple of God. He didn’t go after the pagans of Rome; he went after his own people who had gone astray and were misleading others.

The supreme issue for Jesus was not Rome’s army but God’s people. It was at his house where the cleaning would begin. Jesus recognized that as long as things were wrong with Israel’s worship they could never have their nation right. The Bible says that judgment begins at the house of God (see 1 Pet. 4:17). It also tells us “righteousness exalts a nation, but sin is a reproach to any people” (Prov. 14:34, NKJV).

I think in some ways as a church we sometimes spend too much time and attention trying to bring about governmental change. We believe this will help our culture and society. In a sense it will, and in a sense it won’t. It is my firm conviction that every Christian should register to vote and should vote for candidates that best represent our beliefs. We need to do what we can.

The fact of the matter is that Jesus concentrated his energies on his people. Here is what God said as he assessed a culture and gave his prescription for revival: “If my people who are called by my name will humble themselves, and pray and seek my face, and turn from their wicked ways, then I will hear from heaven, and will forgive their sin and heal their land” (2 Chron. 7:14, NKJV).

Notice where God points His finger: “If My people … will humble themselves, and pray and seek my face, and turn from their wicked ways …” People say the government should do this, or they should do that. God is saying, in effect, “Make sure you are living godly lives. Make sure you have turned from your sin.” That’s where revival will begin. The true change in America’s conscience and soul will come from a spiritual awakening.

Greg Laurie is the senior pastor at Harvest Christian Fellowship in Riverside and Irvine, California, and founder of Harvest Crusades, large-scale evangelistic events that are held across the world. This article is taken from Greg’s weekly column at World Net Daily.