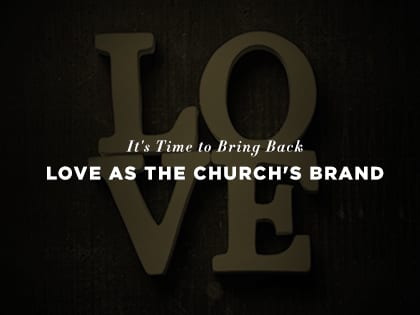 “In the poorest corners of our country, churches are beacons of love and sources of help. But there’s more we can do.”

“If you want to walk fast, walk alone,” goes an African proverb, “but if you want to walk far, walk together.” I love this proverb because it speaks to the power of community over the efforts of the individual. And it’s especially true when it comes to changing the world. None of us are meant to go it alone.

God has wisely chosen to organize his followers into communities—churches—to carry out his purposes in the world. Starting with Jesus’ 12 disciples, and continuing with us today, churches are the outposts of God’s kingdom.

When I read the book of Acts, I’m inspired by the example of the first-century church of Jesus Christ coming to life. In tandem with preaching, teaching and prayer, the early Christians paid special attention to the needs within their community, including the widows, the elderly and the poor.

The early believers lived and loved with such power that God’s glory spread like wildfire. Their example provides lessons for us in the American church today.

Christ’s early followers broke with the status quo by prioritizing people over possessions. They regarded resources as coming from God, to be used for God’s purposes—including to care for the needy, whom God loves.

“All the believers were one in heart and mind. No one claimed that any of their possessions was their own, but they shared everything they had. With great power the apostles continued to testify to the resurrection of the Lord Jesus. And God’s grace was so powerfully at work in them all that there were no needy persons among them. For from time to time those who owned land or houses sold them, brought the money from the sales and put it at the apostles’ feet, and it was distributed to anyone who had need.” (Acts 4:32-35)

These brothers and sisters in Christ lived harmoniously together, breaking bread in each other’s homes and sharing everything while praising God. Their way of life was radically different, an attractive alternative to every other model of human community. It’s no wonder that this appealed to nonbelievers, with the effect that “the Lord added to their number daily” (verse 47).

In the time of Acts, nascent Christianity was spreading, but what happened later during desperate times threw gasoline on the fire.

From Outreach Magazine  5 Ways to Make Your Church Irrelevant

When a plague struck the Roman Empire in the third century, killing as many as 5,000 people a day, you can imagine people’s panic. The common and understandably human impulse was self-preservation—banish the sick in hopes of avoiding contagion.

Christ’s followers didn’t do that. Bishop Dionysius of Alexandria records their heroic actions: “Heedless of danger, they took charge of the sick, attending to their every need and ministering to them in Christ, and with them departed this life serenely happy, for they were infected by others with the disease …”

[Why is it controversial to do good works for the “least of these”?]

This countercultural faith in action helped win over many Gentiles, contributing to the astonishing growth of Christianity from about 1,000 followers in the time of Acts 2 to as many as 33 million people by 350 A.D., according to Rodney Stark in The Rise of Christianity.

By serving those no one else served and embracing those whom society discarded, Christians reflected the character of Christ. Tertullian, a third-century Christian author, observed, “It is our care of the helpless, our practice of loving kindness that brands us in the eyes of many of our opponents. ‘Only look,’ they say, ‘look how they love one another!’” Love was their brand.

The Secret Is Love

I see this spirit today in churches in the Middle East—the cradle of Christianity. While Syria’s war has brought about the worst consequences in the region, including a massive flow of refugees, it has also brought out the best in church leaders. As pastors find themselves inundated with waves of desperate people showing up at their doors, they’re reacting with love.

One church leader, Pastor Joseph, runs a church on one floor of an old tenement in Lebanon. He and his congregation go in to the streets to tell the refugees they are welcome there. For people who are the most unwanted, unwelcome and unloved people in the world, this gesture is almost too good to be true. So they come—about 300 refugees, mostly Muslim, flock to his services each week. I asked him how this is possible, and he smiled and said, “The secret is love. We show them Christ’s love and they come.”

Churches in the Middle East are under duress, even some facing extinction. But like the Christians in the book of Acts, persecution and risk don’t stop them from loving the least and the lost—and it’s a powerful witness.

Certainly we also see churches in America following the example of the early Christians. Often it’s the churches who shelter the homeless and feed the hungry. In the poorest corners of our country, churches are beacons of love and sources of help.

But there’s more we can do. If love is not our brand, let’s change that. In the name of Christ, we can stand in the gap for the unwanted, the unwelcome, the unloved. We can open our doors, share our wealth, and sacrifice our time and resources. And ours can be the communities of believers that provoke people to exclaim, “Look how they love!”