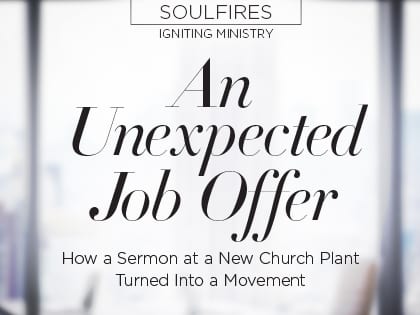 The weather perfectly reflected her mood.

Yvonne Sawyer had moved away from her home in Dallas to accept a hard-to-believe-it-could-be-true job offer as a writer for a company in New York. But when she arrived, she discovered the reason it all seemed too good to be true. The promises the company made to her were nothing more than a list of hope-tos. As she sat in their offices and the lies started to become clearer with each passing moment, she knew the offer was as empty as the feeling in her stomach.

With the job opportunity now dead and her hopes of a writing career dashed, Yvonne was feeling glum on that frigid February in 1989, one of the coldest on record in the last 40 years in New York City. She sat inside her apartment and looked at the snow that had socked in the city and wondered what in the world she was going to do next.

The following Sunday morning, Yvonne scanned her handwritten list of all the evangelical churches in New York City that she hoped to visit. One in particular piqued her interest enough to be placed first on the list, but by the look of the bundled masses outside her window, trudging along in knee-deep snow, she thought better of it. It was too far away. Out of fear of such bitter cold, she chose the last church on her list because it was just two blocks away meeting in a Seventh-day Adventist church building at 87th and Park Avenue.

There weren’t many people there that morning at Redeemer Presbyterian Church—probably no more than 150. She initially thought it was because of the weather, but there was another factor at play. It turned out that Redeemer wasn’t yet a fully functioning church. Tim Keller, the pastor, and his wife, Kathy, were testing the waters, trying to see the appetite for a Presbyterian Church in America church (PCA) in the Big Apple. “We are in need of some help,” Tim announced to the small gathering that morning. “Please feel free to talk to me afterward if you’d like to work with us to see if we can establish Redeemer here on the upper-east side.” Yvonne knew a job opportunity when she heard one.

A few days later, she met Tim and Kathy at a restaurant called Serendipity, on E. 60th Street. In addition to learning that Tim had a near expert-level understanding about what makes the average New Yorker tick, she found that he and Kathy were basically doing everything themselves. “We could certainly use a person like you,” Kathy said when Yvonne told them of her interest, “but you’re obviously way overqualified to be our administrative assistant.”

“I’m OK with that,” Yvonne replied, thinking about her rent payment coming due soon.

“I’ll tell you what,” Tim said. “We can’t offer you much, but if we ever get off the ground, you can have first dibs at any position you want.”

With a new job and church home, Yvonne strode up to the balcony to take in that next Sunday morning’s service. As a writer who was now suddenly an office manager for a church, her life had taken quite a change in direction. It was about to take another.

In a sermon titled “The City,” Keller masterfully wove together a call for the congregation to embrace the idea that helping the underprivileged isn’t merely a good add-on to the gospel, like church get-togethers or a basketball gym. Rather, it is central to the gospel. To have a heart for Jesus is to have a heart that breaks for the poor. The impoverished are embedded in the cross.

She had been in the church her entire life. She had even contributed to different ministries aimed at helping the poor. But on this occasion, as she reflected on her Savior, she felt a profound burden for the needy folks she passed by daily, as if the poor and man’s salvation were two defocused images that came together to create the beautiful, sharp lines of the cross. Yvonne was not someone given to displays of emotion, but she couldn’t fight the wave welling up inside. There in the balcony, she began to weep. “What’s happening to me?” she thought.

From Outreach Magazine  Finding Unity in Times of Conflict

Yvonne walked out of that Seventh-day Adventist church building feeling different. She had been impressed by various sermons throughout her life. But that wasn’t what happened that day. It was more than that. She felt something new had been planted in her. Excitement rose up in her heart—and none of it was about her.

In the days that followed, Yvonne learned that she was not alone. Many people had been profoundly moved that morning. She culled together a group that was eager to learn how they could step into their new understanding of their call to bring Jesus to those at the margins of society. It was the first meeting of what would become a ministry called Hope for New York.