Home Features Going on a Mission Trip This Summer? Don’t Do These 3 Things 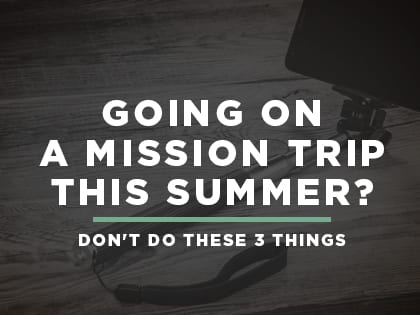 “I’m offering these observations to you along with some suggestions that are less sexy but more helpful to those you serve.”

This summer, church teams young and old will don matching T-shirts and board a plane to some far-off place. But whether you are building houses in Mexico or volunteering at an orphanage in Guatemala, there is one item in your backpack that is GUARANTEED to undermine your ability to serve responsibly … the selfie stick.

Or rather, all that it represents.

You see, a selfie photo generally has one purpose: to capture an image that will then be posted on Facebook or Instagram for the digital applause of our friends.

It’s the 2016 version of a postcard home—a modern way of communicating something about our identity to our circle of friends. But when used in the context of mission among the poor, it has the power to undermine our best efforts to serve.

We can all laugh at the worst excesses of this trend, as captured by Humanitarians of Tinder and Barbie Savior. But if truth be told, we’re ALL susceptible to the subtle pitfall of wanting to serve in a way that looks good online. I know I’ve gone there. And maybe you have, too.

So, here are three selfie scenarios that might look awesome on Facebook, but are disempowering, dignity-stripping and dangerous for local people.

I’m offering these observations to you along with some alternative suggestions that are definitely less sexy, but ultimately more helpful.

One of most common missteps in short-term mission trips is when outsiders do things that can and should be done by local people.

We routinely break the golden rule of community development: “Never do something for someone that they can do for themselves.”

Selfies encourage us to disregard this golden rule, because we are tempted to capture photos of our practical actions for the poor to show people back home.

Orphanage needs repainting? Houses need to be built? Let’s roll up our sleeves!
Dental care? Medical care? No need to train up local people—we’ll come back with a team of outsiders every year!

These photos communicate something about our identity as “good citizens” to the wider world. But they do little to strengthen and empower those we are supposed to be serving.

Alternative Suggestion: Instead of featuring your own efforts to help, take photos (with permission) and celebrate local people who are faithfully working for change in their own neighborhoods over the long haul. Go simply to learn and communicate rather than to portray yourself as part of the solution. They were there long before you came, and they will be there long after you leave. Remember the Cambodian proverb, “It takes a spider to repair its own web,” and use that principle to underpin the stories you tell about what is happening in that community.

From Outreach Magazine  The Role of Prayer in Evangelism

Selfies that portray us as the humanitarian hero with our arm draped around some impoverished victim do a disservice to the dignity of local people and tell a false story about their humanity.

When we present local people in a one-dimensional way, emphasizing only their helplessness and victimhood—rather than their resilience—we contribute to the myth that they can do nothing but wait for an outside savior … us!

We fail to portray them as people made in the image of God.

Even the angle you use for the photo communicates something about the subject. A photo taken looking down on a local person, communicates that they are small and helpless. While a photo angled upwards towards the subject emphasizes their strength and power.

Alternative Suggestion: As I outlined in this blog post, we need to take care to name both the tragedy AND the resilience in any situation—the fragility of a local person, as well as their assets and skills. Both angles are true. Both presented together will more fully represent who a person is. A person’s story can be told in multiple ways, but how you tell it makes a big difference to everyone’s understanding of the truth.

Finally, the temptation to get good selfie photos can lead us to serve in ways that are not only unhelpful, but harmful.

For example, orphanage “voluntourism” can be deeply meaningful to those who engage in it, but it’s also intrinsically damaging for the children in the orphanage. I’ve written in more depth on the problem of orphanages here.

What could possibly be wrong with spending time playing with children in an orphanage and taking a few fun selfies along the way?

But children can and do form close attachments to volunteers, only to lose them when their stint ends. This cycle of short-term caregivers causes further emotional damage in children who already suffer abandonment and attachment issues.

From Outreach Magazine  10 Things I Want Younger Leaders to Know

Selfie culture emphasizes adventurous, hands-on experiences that place foreigners at the center of the action instead of in support roles at the periphery.

It’s time to challenge that and find a more biblical role as outsiders.

Alternative Suggestion: Do you have the humility to serve behind the scenes? Then consider how you can serve in more appropriate but less sexy ways. Grant writing, responsible fundraising and even plain office work are areas that local people who don’t speak English fluently might be able to use your help. A selfie with a laptop won’t look as cool on Facebook, but it is probably a lot more responsible in the long run.

I experienced the selfie phenomenon myself on a recent Sunday. I was sitting in church, and the time came for us to make our way to the front to receive communion.

One of the members of our church happened to be a Cambodian guy with one leg, who makes a living by begging at the traffic lights downtown. He’s a nice guy with a wife and kids and we usually have a chat whenever we run into each other.

So, as usual he worked his way up the front with his crutch under one arm to receive communion. He’s surprisingly agile, for someone who is missing a leg.

Suddenly, a short-term foreign visitor elbowed his way forward and put his arm patronizingly around my friend’s shoulders. The visitor pointed to his cell phone with a big grin and raised it above their heads for a quick selfie.

Don’t be that rude, inconsiderate foreigner.

Lose the selfie stick. Consider carefully the type of photos you take, where and when you take them and the story you are telling with each image. Together we can do a better job of serving across cultures. Isn’t that what it means to love our neighbors?

We’ve all made mistakes in this area. I’d love to hear your thoughts, ideas and horror stories in the comments below.