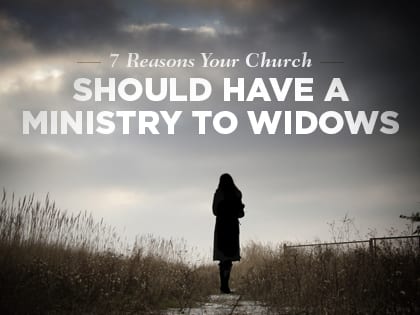 This verse in Scripture could not be clearer or more compelling:

Pure and undefiled religion before our God and Father is this: to look after orphans and widows in their distress and to keep oneself unstained by the world. (James 1:27)

Scholars have produced massive volumes on the biblical mandate to care for orphans and widows. The Bible is not ambiguous on this topic. I am grateful churches around the world have taken some steps to care for orphans, though much more remains to be done.

But, in North American churches, I see hardly any intentional churchwide ministries to widows. Millions are left to suffer and struggle in silence.

Though the biblical mandate to care for widows should be sufficient motive for our churches, consider some of the struggles widows experience. These seven factoids should give you at least a glimpse of the need for ministries to widows in your church.

1. The death of a spouse is the number one stressor in a person’s life.

Too many survivors are not ready to deal with the issues of widowhood (according to the Holmes and Rohe stress scale).

3. Widowhood lasts on the average 14 years.

That is a significant portion of any person’s life (U. S. Bureau of the Census).

4. There are over 14 million widows in the United States today.

That is an average of 40 widows for every church in the United States (AARP).

From Outreach Magazine  Why Doesn't God Step In More Often?

5. Upon the death of a spouse, a widow loses 75 percent of her support base.

It is imperative for churches to stand in the gap (Widow’s Hope).

6. Widows have a 30 percent higher risk of death in the first six months after the death of their husbands.

They truly die of a broken heart (University of Glasgow).

7. The poverty rate among widows is three to four times higher than elderly married women.

Please don’t walk away from reading this short post without considering some type of action in your church to care for widows.

It is one of the clearest mandates of Scripture.

It is also one of the most neglected mandates of Scripture.

This article was originally published at ChurchAnswers.com and is reposted here by permission.