Home Features How Pro-Life Are We, Really? 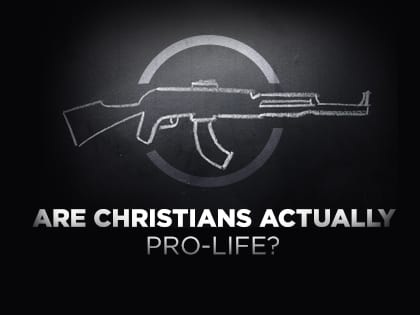 “As a people who claim to be ‘pro-life,’ can we agree to come back to the most central teachings of Jesus?”

Recently, I wrote a piece on welcoming Muslim refugees. The response was—how should I say it?—enlightening.

A recurring theme running through the angry responses was the hyper-masculine bravado about violently responding to any and all threats from outsiders.

I see the same vitriol rearing its ugly head in the American gun control debate: Christians defending their right to use guns to kill someone who threatens them.

Have you noticed that no other nation is having this argument (or this recurring problem of mass shootings)? That’s because it taps into a deep, deep founding myth within American culture, the myth of redemptive violence—the idea that violence saves us.

When I look at the life and teachings of Jesus, I see a Prince of Peace who was “pro-” the lives of everyone. Not just those in our own tribe or creed. I see a Jesus who refused to use or advocate violence, even when his own life was about to be taken. A Jesus who came to lead us to stand in radical contrast to what the rest of the world has embraced: to love our enemies, not to kill them, even when everything within us rises up in support of retaliation and righteous violence (and believe me, it does for me too).

“You have heard that it was said, ‘Love your neighbor and hate your enemy.’ But I tell you, love your enemies and pray for those who persecute you, that you may be children of your Father in heaven. (Matt. 5:43-45)

I am compelled by Jesus to be “pro-” my enemy’s lives. Not to take their lives from them. Not to kill them vicariously by remaining silent when my government does it on my behalf. Not to participate in any way in the machinations of war that would contribute to their deaths. Not to bomb them or shoot them or execute them with lethal injection.

In war, we are taught to think we are fighting for justice, but instead we are fighting for just us—our side, our people, our children—over and against the children and families of our enemies. And even then we are deluded, since those who profit from war on our side are a small elite who get richer while the poor are sent off to the front lines of battle to kill or be killed.

I don’t believe Jesus counts one life as worth more or less than another. The child being formed in a single mother’s womb, whether American Christian or Pakistani Muslim, is a precious gift from God, and should never be snuffed out.

From Outreach Magazine  A Step Toward Healing From Sexual Abuse

In the polarized American political landscape, to be pro-life has been reduced to mean being “pro-” one tiny subsection of life—that of a baby growing in a mother’s womb. I stand with those who cry out against abortion. All life is precious, no matter how tiny and fragile.

But we are not simply to be pro-birth. Jesus calls us to be consistently pro-life.

How can we say we are consistently “pro-life” when in one breath we condemn abortion, and with the next support the death penalty, or so-called “just war,” or refuse to give up our right to weapons that are used in one mass shooting after another?

In April 1967, Martin Luther King Jr. gave a speech in which he publicly spoke out against the Vietnam War, indeed all war and militarism, declaring that we could not confront the evils of poverty without confronting “the greatest purveyor of violence in the world today—[our] own government.” King stated, “A nation that continues year after year to spend more money on military defense than on programs of social uplift is approaching spiritual death.”

After this, King grew more determined to speak out against state-sanctioned violence, and perhaps it is no coincidence that he was assassinated a year to the day after this great anti-war speech. Radical challenges to the empire inevitably lead to the leader being silenced, and murdered.

Theologians Stassen and Gushee collected evidence from early church documents to show that for the first three hundred years or so, the Sermon on the Mount and its teaching on non-violence was the single most quoted piece of Scripture evoked for teaching, discipline or doctrine in the church. The church fathers regarded it as the key to Christian discipleship.

But after the conversion of Emperor Constantine, Christianity was co-opted by the state, and this revolutionary sermon began to lose its central place in the church’s teaching because it threatened those in power and subverted the authority of the empire. Over time, Christ’s radical “Blessed be …” verses were sidelined and spiritualized away. Instead of “Blessed are the poor,” the church teaching began to focus solely on “Blessed are the poor in spirit.”

But when we sideline the most subversive teachings of Jesus, we lose any hope of seeing the Kingdom transformation that Jesus inaugurated with his life, death and resurrection. “Blessed are those who seek peace, for they shall be called children of God” (Matt. 5:9).

As a people who claim to be “pro-life,” can we agree to come back to the most central teachings of Jesus—his radical and controversial Sermon on the Mount? Can we commit to be consistently pro-life, upholding the lives of every human being, even those of our enemies?

Then, and only then, will we finally look radically different to the rest of the world that is committed to the ways of violence and retaliation.

And that will be good news in a world that is hell-bent on destruction.

Craig Greenfield (@craigasauros) is the founder of Alongsiders International and author of the upcoming Subversive Jesus: An Adventure in Justice, Mercy, and Faithfulness in a Broken World (Zondervan, April 2016). A storyteller and activist living in urban slum communities for the past 15 years, Craig’s passion is to communicate God’s heart for the marginalized around the world. Get a free copy of Craig’s first book Urban Halo at his website. This article was originally published on Craig’s blog.