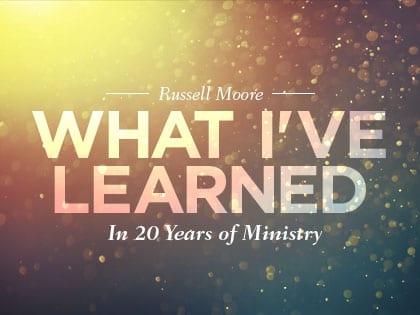 Recently I was startled to realize that I had hit an important milestone in my life, the 20th anniversary of my ordination to gospel ministry. As I’ve reflected back on that August night back in 1995 Biloxi, Mississippi, I’ve tried to recall some of the things I’ve learned since then. These are not necessarily the most important things I’ve learned—many of those, I’m sure, are subconscious, but these are 20 things that come to mind at the moment that I’ve learned in 20 years of ministry.

2. At my ordination, an elderly deacon referenced the Bible and my wife, saying, “Son, don’t ever get in the pulpit with any other book than that one, and don’t ever get into bed with any other woman but her.” Wise counsel. Another way of putting it: “I keep a close watch on this heart of mine; I keep my eyes wide open all the time. I keep the ends out for the tie that binds; Because you’re mine, I walk the line.”

3. Most of my regrets are failures to be kind or merciful. What haunts me most are not sermons that could have been preached better or ministries I could have led better, but rather people I loved who needed more mercy than I could or would give, or people I gave up on too soon. If I could advise my younger self, I would say, “Err on the side of kindness and mercy.”

From Outreach Magazine  What Are the Qualifications of a Leader?

4. I cannot overestimate the blessing of old friendships. I desperately need the people who knew me before I was “Dr. Moore.” They are the ones who can knock me down when I get prideful, and remind who I am and what God has called me to when I get down and depressed. As your life goes on and ministry gets more frantic, it’s easy to let those friendships grow dormant, more time elapses between phone calls or visits. Don’t let that happen.

5. There is no ministry without mentoring. I keep pictures around everywhere of mentors in my life, those who took chances on me at a young age and who taught me what I know. Most of what I learned from these men and women happened in non-programmed times, when these mentors would hardly have known they were “mentoring.” At the same time, I look around at the protégés God has given me in ministry—many of whom I still get to serve with in various ways as colleagues now. Mentoring will take a lot of your time, and sometimes your emotional energy, but it is worth it.

6. Personal counseling has been as important as study. I’m, by nature, more prophetic than priestly. I don’t particularly like one-on-one counseling. I’d much rather preach a sermon or write an article than sit with a bickering couple about who sent what text messages to whom. But I often found myself with a weekly load of lots of personal counseling. In that I gained insights into struggles I’ve never had, wounds I’ve never thought of, temptations I’ve never experienced. It helped me, I think, to pray better but also to preach better and to write better. It’s what I miss most about both being a pastor in a church and being dean at Southern Seminary.