Home Features Do Guns Belong in the Church? 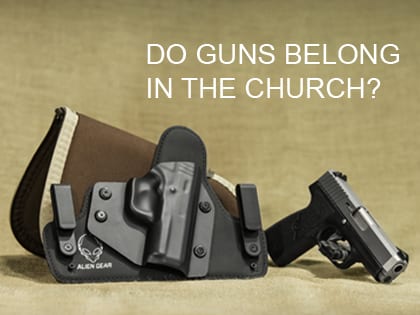 “Defending the faithful with firepower raises some complicated questions. Do guns and God make a good mixture?”

As terror attacks continue abroad and closer to home, are Christian churches seen as a vulnerable “soft targets?”

In addition to all the other challenges facing the Western church, now physical safety has risen as a growing concern. Has gathering for worship or other church activities become a palpable safety concern for the public? Will fears of becoming a target accelerate already-declining church attendance habits?

Many churches have established detailed security protocols, including the activation of armed guards. For some large churches, this isn’t new. They’ve long employed security forces and bodyguards, created primarily to protect their celebrity pastors from autograph hounds and disturbed followers.

Now the concerns turn to the vulnerable in the pews. The fears and potential dangers arise not only from terror threats, but from perpetrators of domestic violence, disgruntled past employees, and mentally disturbed individuals. But defending the faithful with firepower raises some complicated questions. Do guns and God make a good mixture?

Should churches be equipped with guns to deter or kill potential evil doers?

Should church security personnel openly display their weapons–or conceal them?

A friend of mine, whom I’ll call Kevin, serves as a volunteer security officer at his church. He wears a uniform–a marked church security shirt and black tactical pants. And he carries a gun, concealed. He receives recurrent training with members of the local SWAT team. He, and his fellow church security officers, rehearse to use lethal force, if necessary, to thwart attackers.

Kevin’s church, while located in a state that licenses individuals to carry concealed weapons, does not encourage members to bring guns to church. He said, “I’ve been approached by several members from the church letting me know that they’re carrying concealed weapons and they often they ask me if that poses a problem. I reassure them that we do have armed security team members and that our hope is that they feel secure enough not to carry. I also share my concern with them that if something was to happen and they were to draw their weapon from concealment, members of our armed team could misinterpret their good intentions and they could be mistaken for a second shooter.”

From Outreach Magazine  Reaching Gen Z Students Before They Graduate

That’s how one church has approached their security risks. And, even if the actual risk for violence at church is statistically small, fears among the public are rising. Therefore, every church would do well to discuss these issues and proactively determine how to approach these security risks. Some resources are available to help assess the challenges. The National Disaster Interfaiths Network offers a tip sheet titled “Active Shooter in a House of Worship.” The U.S. Department of Homeland Security also offers several resources at its Active Shooter Preparedness website.

Congregations also need to consider questions of faith while thinking about how to confront potential violence on their home turf. When does God’s call to “fear not” apply? When does the common sense of self-defense apply?

How a congregation reacts may reflect society’s growing angst about security. Will the presence of armed security guards bring peace of mind to church attendees? Or will visible security measures only scare away would-be attendees, reminding them of the perceived danger of becoming a target for those who wish to attack public gatherings of Christians?

For Christians today, the sense of sanctuary is changing. As it was for the first disciples, publicly following Christ carries certain risks.

Tom Schultz is the founder of Group Publishing and Lifetree Café and the author of several books, including Why Nobody Wants to Go to Church Anymore. This story was originally published on Schultz’s blog, Holy Soup.