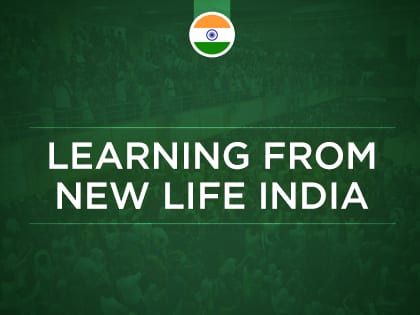 Lessons From the Ongoing Transformation of a 40,000-Person Church in India

For most churches, the outreach strategies and structures that brought them to one level probably won’t take them to where they need to go next. A church in Chennai, India, vividly embodies that reality. New Life Assembly of God, which draws up to 40,000 people each weekend, has been in a constant state of adjustment since its founding—something it affirms as a healthy practice.

Persisting Against the Odds

The church began with many odds against it. Christians asked Pastor David Mohan back in 1973 when he started New Life as a house church in his apartment, “Why would you start another Assemblies of God church here in Chennai, when we already have two others?” Moreover, the surrounding city, being over 80 percent Hindu, was not particularly welcoming of Christians.

During its first 20 years, the church experienced setbacks through cyclone, fire and flood. “Three times we went down to nothing and had to start again,” says Chadwick Mohan, son of the founder, and one of the senior pastoral leaders today. “These disasters could take our building, but not our people.”

Even so, by the 20-year mark, the church was drawing some 2,000 people to Sunday worship across multiple services. They walked or took public transportation. Most were poor and didn’t own a car, but even for the few who did, the church didn’t have a parking lot (and still doesn’t).

Experimenting With New Tools and Materials

Pastor Mohan, recently joined by his son Chadwick, continually experimented to find materials that would work in their specific context. Naomi Dowdy, a missionary leader based in Singapore, taught them how to empower and release the laity to do ministry. The church experimented with the G-12 cell model from South America. From the United States, BILD International and the Antioch School of Church Planting and Leadership Development provided additional materials on leadership development. Missionary David Stewart Sr. brought in other new concepts from the West, and U.S. leaders like One Hope’s Rob Hoskins have suggested many ideas for New Life to consider.

“We continually explored material to see if it could fit our context,” Chadwick explains. “We were very open for others to teach us. We are a church that keeps learning, and that was one of the reasons we grew.”

New Life’s leaders were drawn most to those who suggested innovations, but didn’t impose them. “We have chosen to work deeper only if others would allow us to be the ones that shape it for our culture and context,” Chadwick says.

As the years passed, Chennai—India’s fourth-largest city—was also changing, bursting at the seams as a large commercial and industrial center, especially for outsourced information technology and financial services. That drew a more professional class to the area with English as the common language for communicating across India’s many language groups. These shifts also helped accelerate growth in the surrounding universities.

The church began in the Tamil language, the regional language that most common people speak. Now an increasing number of residents with professional leanings tend to be educated and use English. “So there was an absolute need for English,” says Chadwick. After experimenting with English ministries for several years, New Life launched an English Sunday morning service in 1999, where Chadwick has served as the primary preacher.

In some ways English services met a need and reached new people for Christ. In other ways they accentuated the challenges of a church broadening to serve people from very different backgrounds. Initially the English services were a combination of young adults who had grown up in the Tamil services (so now many family members split up between the service options), students from universities, professionals from IT employers and the expat community. To connect with this crowd, the English worship was more contemporary in tone and style than the Tamil services.

“One Tamil worshiper was very wary of attending his granddaughter’s dedication in our English auditorium,” says Chadwick. “He came but was very uncomfortable, feeling all the lights and sounds somehow made it unholy.”

Other adjustments in reaching two different language and social groups were triggered by geography. When the church shifted to home-based small group care cells, it worked for most Tamil speakers who lived within walking distance of other church members, but the English crowd had a lot of challenges, due to their homes being too far apart. Leaders figured out appropriate workarounds, and the English ministry has now caught up.

From Outreach Magazine  What's Holding You Back?

Other adjustments stem from translation issues. “The BILD materials took off very well with the English congregation,” says Chadwick. “Then the Tamil people asked to use BILD, but the cultural translations have been tough.” So they’re working on more dynamic ways to convey the materials.

Today the English services—overseen by Chadwick—draw about 4,500 adults and children weekly across two different campuses. The Tamil services—still overseen by Pastor David Mohan—draw 30,000 to 35,000 people. Each Sunday, the original “Little Mount” campus hosts six services in Tamil, five in English and three in other languages. There are two auditoriums, the one used for Tamil seating 4,500, and the one for English seating 1,300. “Every inch is filled with people, television sets and video screens,” says Chadwick.

This organizational complexity has triggered another shift for Chadwick. “I don’t take care of the day-to-day English [congregation] administratively any more—a seven-member core team has been put in place, which I coach,” he explains. “I lead the team, so if we decide anything, we decide together; it’s ‘our’ not ‘my’ decision.”

So the church that started as a single cell grew into a large-size church and then a cell-based megachurch. Now it’s moving from megachurch to a complex apostolic network of churches. “We believe the church to be the center of God’s plan for the ages, but we are always in flux,” says Chadwick. “We are continually being established in the biblical principles of who we are as a church, but unless we keep exploring new approaches, we will not be able to do what is set before us in the future—reaching other cities and building more apostolic teams.”