Home Features Changing How We Change the World 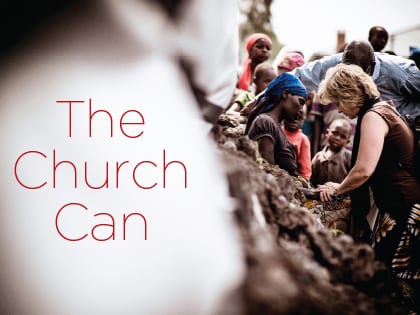 “Ending extreme poverty is possible, but it must be tackled from the bottom up—with, not for, the people affected most.”

Too often people exclude themselves from the idea of changing the world. “I am just an artist,” someone might say. “I am just a mom,” or “I am only an engineer.” But Jesus didn’t only call the well-known and well-connected but “all who have faith in me” to “do the works I have been doing” (John 14:12). Overcoming injustice today requires an understanding of calling for everyone, far more than the aid worker, minister, politician or professional. Today’s movements—whether to end hunger, abolish trafficking or stamp out extreme poverty—are fueled by storytellers, artists, entrepreneurs, students and bloggers, people who have embraced a holistic idea of the kingdom of God. N.T. Wright says, “When God saves people in this life, such people are designed to be a sign and foretaste of what God wants to do for the entire cosmos. … What’s more, such people are not just to be a sign and foretaste of that ultimate salvation; they are to be part of the means by which God makes this happen in both the present and the future.” We’ve entered a new age of activism. It’s inspiring, impactful and invigorating for those brave enough to reject the mythology that surrounds calling.

It’s common to tackle symptoms instead of causes when it comes to injustice. Good theology helps us understand root causes by reframing the problem. Two words are used for justice in the Old Testament. The first, mishpat, means “rendering judgment,” or “giving people what they are due,” and is sometimes referred to as “rectifying justice.” The second word, tsedequa, means “the right thing,” or especially, “right relationships,” and is referred to as primary justice. These words are often paired together in Scripture as “justice and righteousness” and, in some instances, one means the other. The Book of Isaiah even uses the word justice to mean “the sum total of what the Lord has deemed right” or, in essence, the very will of God. Taken together, mishpat and tsedequa present a relational definition of justice, an important dimension that has been overlooked for too long.

In its fullness, justice is about right relationships—relationships that work. Injustice is about relationships that don’t, when people are left out, oppressed or exploited. Understanding justice through the lens of relationships changes how we respond, and is often the differentiator between charity and justice. This is what I mean by “reframing the problem.” For example, while material aid might be necessary, it doesn’t usually change a person’s relationship to the community or create access to resources in a sustainable way. But helping women in Congo gain access to small business loans positively changes the relational dynamic of women in their community, and even within their family and church structures. While both efforts seek to overcome poverty, the latter prioritizes relationships, which gets to the heart of biblical justice.

From Outreach Magazine  10 Things I Fear for the American Church

Ending extreme poverty is real and within reach. But such an audacious goal requires a different approach. It requires ideas, programs and models that inspire grassroots leadership, offer intrinsic incentives and hold people accountable to their goals. It believes in the potential, resilience, faith and perseverance of people trapped in poverty, treating them as agents of change—heroes—rather than helpless victims. It calls upon their dreams, their aspirations and their faith to put action to their hope for a better future.

Ending extreme poverty is possible, but it must be tackled from the bottom up—with, not for, the people affected most. It must involve all of us—private and public sectors, academia, civil society and faith communities. Better policy, both macro and micro, financing for economic growth, anti-corruption measures and investment in gender equality are necessary, but none of these is sufficient. Unless these measures are pursued in tandem with proven, grassroots solutions, we will not succeed.

When it comes to evangelism versus justice, from a kingdom perspective, if one aspect is absent, the gospel is crippled. The idea of justice culminates in the life and message of Jesus. Jesus not only teaches justice—”Blessed are those who hunger and thirst for justice”—he becomes justice. Yale theologian Miroslav Volf says, “The demands of justice and the extravagance of love meet on a wooden tree.” In Mother Teresa’s words, “Justice without love is not justice and love without justice is not love.”

It’s hard to be optimistic when our news cycle is dominated by terrorism, disease and war. And the world seems be getting worse. But in the midst of the strife, there exists a counternarrative, one that might not earn the ratings news outlets seek. Take, for example, the good news about poverty. Of the 7 billion people living on Earth, the bottom billion lives on a $1.25 or less per day. This is extreme poverty we’re talking about. But experts say this is far better than it once was. In 1981, 52 percent of the world lived in extreme poverty. Today, about 20 percent do. In recent years, not only have poverty rates fallen, but the number of absolute poor people has also declined, taking into account population growth.

These trends have especially impacted children. Not long ago, more than 40,000 children under the age of 5 died each day. In the 1990s, it dropped to 33,000. By 2008, it was 24,000. Today, that number is less than 20,000. I’ve seen these changes first hand. World Relief, the organization where I serve, saw infant and child mortality rates decline by 49 percent and 42 percent, respectively, through a child survival project in Mozambique. To a mother in sub-Saharan Africa, that means her children are nearly twice as likely to live beyond their fifth birthdays. Still, poverty is pervasive, and, in many countries, the gap between the rich and poor is growing. While poverty is often linked to other injustices such as trafficking, it’s only one injustice among many. We have much more work to do.

Despite the daily news cycle, the world is getting better. Extreme poverty plagues half as many people today compared to 30 years ago. Twice as many kids are surviving beyond the age of 5 than 25 years ago. And, all of us can be part of the solution.

Doing justice well is important, but who we are is equally, if not more, important. The question I am asked most often when speaking about hunger, war, trafficking, disease or poverty is, “What can I do?” I’ve never been asked, “Who must I become?” But doing justice is only as good as the people who do it. We have the opportunity to choose to live lives of radical surrender and sacrificial love, making heroes of others, not ourselves, and honoring God along the way. This is the hard work of justice, but also the most enduring and life-changing.

Stephan Bauman is former president and CEO of World Relief, an advocate for the church to overcome global poverty and injustice, and author of several books, including Possible: A Blueprint for Changing How We Change the World (Multnomah 2015).