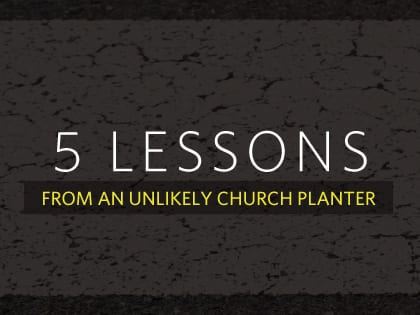 I have learned the hard way that pain is the best teacher. I have also learned that out of great pain comes great purpose. When we planted CityReach Church, we had no idea what God would show us and teach us—and how he would use us to grow his kingdom.

They might seem bad in the moment. But in the middle of the bad things is always a promise from God. Our recovery home directors, church planters and a lot of our leaders come from a rough past, but God has turned this around for good.

One of our pastors/planters, Anthony, and his wife were bound by drugs and alcohol. Anthony’s life was marked with pain and addiction. Not only was he ruining his life, but also he was selling drugs, assisting in the ruin of others’ lives as well. Several years ago, they were invited to an Easter service at CityReach Church Pittsburgh. At that service, they gave their lives to Jesus and began to run after him. They got off drugs, repaired their marriage and began to prepare themselves to serve in ministry. As he went through biblical and ministerial training, Anthony’s passion for people just like him grew more intense. He returned to his hometown to plant a church and preach the gospel to people who remember what he was once like. Today, they see a changed man, a man free from drugs. His life carries a message of the power of God to transform a life. Anthony’s past was a form of preparation. He knows the culture and understands the problem. He ministers out of the grace he has experienced. His story is a message of hope and redemption to the entire neighborhood. God took Anthony’s lifestyle choices and redeemed them to reach others.

From Outreach Magazine  Physics, Faith and the Myth of Intellectual Suicide

In my journey, I’ve learned that God loves to use the people no one expects him to use. God doesn’t call the equipped; he equips the called (1 Cor. 1:26-29). I love this promise. When God uses an unlikely person, God always gets the glory. When he gets the glory, people look to Jesus. When people look to Jesus, they experience salvation and transformation. As more unlikely people are saved, the revolution continues.

I’ve also noticed that these “unlikely” people are very moldable and teachable. Teachability is a huge factor in training church planters. When someone questions everything you tell him to do, the process slows down immensely. But when someone is humble enough to listen and be taught, he or she grows very rapidly and is prepared for the task at hand.

We have seen this happen throughout the CityReach Network. Pastor Justin Mazlanka grew up on the north side of Pittsburgh. He was a drug addict and alcoholic. One night after an evening of drinking, he wrecked his car. The only spot in the vehicle that remained intact was the area right behind the steering wheel. After his accident, Justin gave his life to Jesus and got plugged into a local church. When I came to Pittsburgh to plant CityReach Church, Justin joined my team. He served alongside me from the beginning. He was our first men’s recovery home director, and then became my associate pastor. After serving with me for several years, God called Justin to an overlooked place. We sent him out to plant CityReach Church Cleveland. He and his wife moved there and started both a men’s recovery home and a church. Last year, Justin’s church planted two other churches in Cleveland neighborhoods that are poor, broken and in need of God’s grace.

From Outreach Magazine  Why Moral Failure Is Not a Megachurch Problem

Justin was an “unlikely.” These particular neighborhoods in Cleveland have been “overlooked.” God has combined the two into a movement of grace in that city.