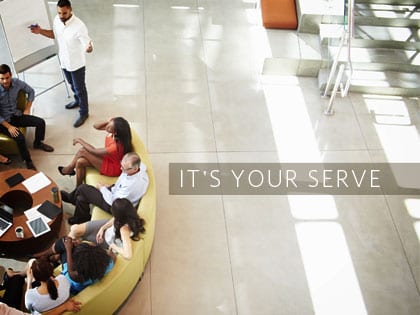 My first desk at LifeChurch.tv was an old door balanced on cinder blocks. I shared an office that was tucked away in a dark corner of the building. Just starting out in ministry, I was 24 years old.

Previously, I had started and sold two companies successfully. As an entrepreneur and CEO, I bore the responsibility for most of what happened in those companies.

When I came to work at LifeChurch.tv, I wasn’t the leader anymore. I had a boss, and my boss had a boss. I was part of a team. I knew the transition would be different and I embraced it.

But after about 18 months, something changed. I felt like what I was doing wasn’t significant enough. I thought I deserved more responsibility. I even started getting worked up about things that deep down I knew were silly: I wanted a bigger office, closer to important leaders. I wanted to be invited to the right meetings. Why? I believed I deserved it.

So I attempted to exert influence, and things only got worse. The more I tried, the more clear it became that this wasn’t working. My frustration grew to the point I was ready to quit every day.

It was a miserable season, but I’m thankful for God’s faithfulness in helping me get through it. With much prayer, reflection and wise counsel, my perspective completely changed.

I came to the realization that I didn’t deserve anything. It was only by God’s grace that I had the opportunity to play a part in what was happening at LifeChurch.tv. I was called to serve, and that meant serving in whatever capacity was needed.

Accepting this truth caused me to rethink everything about the approach I was taking. I had to turn my ideas about leadership upside down by learning to lead up. Here’s what that journey looked like for me.

Lead up by serving up.

The first step I needed to take was a heart adjustment. Leaders love to empower those with a servant’s heart. It’s much easier to develop trust when you’re not spending energy wondering about the motives of people around you.

As a new staff member, my eagerness to contribute slowly morphed into me having my own agenda. It was based on what I thought was important and what I wanted to see done—my vision. In retrospect, it’s no surprise that this quickly became a barrier to me leading up.

Once I began focusing on serving my leaders, that’s when real alignment happened. I started to earn trust, regained the energy I’d wasted on friction and politics and found clarity about what I woke up ready to do each day.

Get In their shoes.

In every leadership role I’ve held, I’ve had to make decisions others didn’t agree with and didn’t understand. In hindsight, not all of those decisions were the best, and in a few cases would have been better if I’d heeded more of the input from those who worked with me. So why didn’t I take their advice? Many times, I wasn’t sure they appreciated all of the factors I had to weigh in making the decision. I also didn’t think they fully understood the potential consequences of a bad decision or how those would affect me.

Those experiences have helped me in my relationship with my leaders. Sometimes it’s easy to think the key to influencing a decision is for your leader to understand your perspective, but it is much more important for you to spend your energy trying to understand their perspective. Doing so helps you build trust and give better input.

Do well with what you have.

The easiest way to lead up is to do a great job with what you’ve been entrusted. I’ve known several people who are confused about why their great idea or new project or plan is seemingly being ignored by their leaders. Regardless of how insightful the idea might be, it’s hard to give more influence to or receive significant input from those who are not being responsible with what they’ve been given. I know my ability to lead up or have influence can be significantly reduced if I’m not leading well in my areas of responsibility.

From Outreach Magazine  5 Tips for Expanding Your Online Sermon Audience

Much of learning to lead up is learning how to be a servant leader. It sounds pretty straightforward, and when I think back to those early days on staff it’s easy to see how wrong I got it. At least it is now. But I remember the pain and confusion from that season, and how tempted I was to seek out an environment where I’d have more control. I can’t imagine how much I would have missed if I’d given up. If you find yourself in a similar place, I encourage you to dig in. Forget what your role looks like to the outside world and figure out what it looks like to live a life of service.