Home Features Pray Before You Plant! 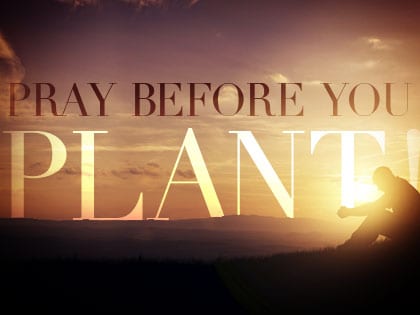 “When the church is considered a house of prayer, the blind find sight in it, and those limping through life are restored.”

Every church leader has defining moments in his or her ministry. I remember mine. It was actually a story someone else told me about Billy Graham, but I’ll never forget hearing it. To be honest, I’m not even certain if it’s completely accurate, but the story clearly captures the essence of Rev. Graham’s approach to evangelism, as I know it.

Backstage at a Billy Graham crusade, some of the local pastors asked one of the crusade organizers, “What is the source of Billy’s effectiveness?” The organizer looked at them and said, “I’ll show you,” and led them to the speakers’ green room. There, he pointed to a damp spot on the floor and said, “Here is where Dr. Graham weeps in prayer over souls before the service begins.” That wasn’t hard for me to believe. I remember hearing Billy Graham say, “Tears shed for others is a sign of strength.”

When I first wanted to start planting churches, I felt the Lord ask me, “Larry, are you willing to fast for 40 days and pray before you plant?” I was used to fasting a day or two, but 40 days? I tried to rationalize away the Spirit’s voice, but I really wanted to plant churches to reach lost people. So I finally promised God a 40-day fast.

The experience was brutally wonderful. My spiritual hat is off to those who do this yearly. I shrank up. I got cranky. My wife pleaded with me to start eating for her sake. But I stuck it out, and God met me in incredible ways. That adventure kicked off a church planting movement that continues to this day.

From Outreach Magazine  Why We Must Forgive

I continue to see firsthand how God responds to Spirit-led, earnest prayers for the lost. I think of Bryan in our local church, at one time an atheist, and now a committed disciple.

Bryan was a brilliant engineer adamantly set against the “mythology” of Jesus. His wife’s new faith in Christ only served to add another deadbolt on his heart. What Bryan didn’t realize is that one of the leaders in our church had felt led to call their small group to intense prayer on his behalf. A growing number of our church members were caught up in the daily “Bryan” prayer.

After a couple of months, we heard reports of what seemed like “deadbolts” loosening. Then Bryan showed up at church for a service. He didn’t stay for the whole thing, but he was there. Over the next few weeks, he showed up each Sunday and stayed longer. One Sunday when I was preaching on a topic as far from salvation as you could imagine, Bryan raised his hand and walked down the aisle to indicate a personal faith in Jesus.

All those praying for Bryan were excited yet honestly still a little skeptical. But Bryan’s faith was genuine. So much so that for the last 13 years each Saturday, he has ridden his bicycle 36 miles around the perimeter of Long Beach to pray for the people of our city to know Christ. I often think that anyone who comes to Christ in our city owes a little to Bryan, the bicycling converted atheist who prayed for them.

Where the Blind Find Sight

The power of the Spirit to help us witness effectively usually begins with the power to pray earnestly. We see this pattern throughout the book of Acts.

What the “waiting” Jesus asked his disciples to do in Acts 1 was not passive. Consequently, we see the Twelve gathered in the upper room begging the Spirit to fill them so that they could carry out the call of being a witness to the world. As their prayer ascended, the Spirit descended, resulting in Jesus’ message heard in the languages of the nations.

The New Testament church devoted themselves to prayer (Acts 2:42), compelling the Acts 2:47 outcome: “The Lord added to their number daily those who were being saved.” But this should not surprise us. Jesus modeled this priority. Twice, he cleanses the temple of corrupt activities robbing the church of its power. In Matthew 21:13, he said to the moneychangers, “It is written, ‘My house will be called a house of prayer,’ but you are making it a den of robbers.”

I’ve always loved the next verse: “The blind and the lame came to him at the temple, and he healed them” (Matt. 21:14). As leaders who plant the church, we need to remember that when the church is considered a house of prayer, the blind find sight in it, and those limping through life, as in the case with Bryan, are restored. In a mysterious but real manner, the Lord links our engagement in prayer to our effectiveness in evangelism.