Home Resources Kay Warren: Forgiving Those Who Unjustly Criticize You 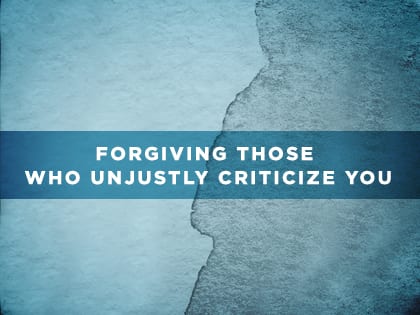 “Holding grudges and keeping a record of wrongs are responses that feel justified but will sabotage unity in the church.”

Recently, one of the charter members of the church who had been with us for thirty-five years passed away. Funerals can be challenging these days, and I particularly felt the sadness of saying good-bye to this beautiful, faithful woman of God. I planned to go to the cemetery for the burial following the memorial service, so I stopped to buy flowers for her gravesite as well as for Matthew’s since he is buried in the same place.

As I walked up to the entrance of the grocery store where I intended to purchase the flowers, I noticed a man soliciting money for an organization. I usually give to whoever is there—Girl Scouts, Boy Scouts, Salvation Army—but this day I was in the grief zone. I stared at the ground, lost in my thoughts of grief for my friend and for Matthew. When the man asked if I would care to donate, I quickly looked up through my tears and said, “Not today, thank you.” I went in, bought the flowers, and left the store.

Two days later I got a letter from that man. He said, “I was the one asking for donations in front of the market the other day and I noticed you did not give to this worthy cause and you gave me a dirty look. You should be careful because people are watching your life. I won’t gossip about it, but you have a lot of money and you should have made a contribution.”

Many times I can handle criticism with grace, but this time really made me mad. I think his words stung because he made an assumption about me in the middle of a grieving moment and then questioned my generosity. To top it off, he made a veiled threat about spreading a rumor about my supposed lack of generosity. I usually ignore letters like his or write back in a completely neutral and conciliatory tone without taking offense, but this one got me.

I had to resist the urge to write back a blistering email that would not only set the record straight but also squash him like a bug. My hands were still shaking when I calmed down a bit and typed out a few intense words of self-defense, telling him of my grief that day and that I had not given him a dirty look—that I spoke gently to him through my tears. I closed my email with the hopes that he would judge me more graciously.

Like I said, I don’t generally respond to letters like his; I’m not sure I did the right thing in writing back. Perhaps my words didn’t change anything. He could be just as convinced today as he was that day in front of the grocery store that I was unkind to him and that I’m stingy.

From Outreach Magazine  Why I Stopped Asking God to Use Me

But I’ve come to realize that the part that makes it hardest for me to forgive is my wounded pride—not my grief. I have to forgive people all the time who don’t understand what it’s like to experience catastrophic grief. But he judged something I feel good about. I think of myself as a giving person. To have him believe I’m stingy and unwilling to share with others in need hit my pride hard.

Honestly, I want to keep rehearsing the incident. I want to keep telling the story because those who love me take up an offense on my behalf. But what good will that do? What else can I do but radically forgive him? To hold on to the hurt feelings and my sense of judgment and condemnation is to let bitterness gain a foothold in my soul. I have to release him and let him off the hook.

How about you? Have you struggled with forgiving a brother or a sister in Christ? Maybe you were knocked to your knees by the accusing, blaming, judging, or condemning words from a friend’s mouth aimed at you or your husband. When hurt comes through someone we’ve served Jesus with, prayed with, poured out our hearts in trust and confidence to, walked through suffering with, laughed and played and worshiped with, that hurt feels like a complete betrayal. Maybe we expected better of fellow Christians, maybe we just never saw it coming, maybe we thought our mutual love for Jesus would protect us from the challenges of friendship.

Maybe your kids got caught in the cross fire. Maybe they’re the ones who took the arrows and you’re not just hurt; you’re spitting mad. “How dare they treat my daughter like that?” Or “What made them think they could say such things about my kids?” This is dangerous territory for you as a parent. Nothing clouds our judgment quicker than feeling defensive about our beloved children. It takes the utmost wisdom to take a step back and evaluate tense situations that involve our kids so we can get a clear perspective. But let’s say your perspective is clear and your children have been treated unfairly or unkindly and your emotions are running hot. Forgiving the offenders will take everything you’ve got.

From Outreach Magazine  Shootings, Grace and the Gospel—An Interview With Pastor Eddie Bevill of Parkridge Church

But at the end of the day, we don’t have many options. Holding grudges, keeping a record of wrongs, being guarded and distant with one another, refusing to let a hurt go, or waiting for the other person to apologize first are all responses that feel justified but will sabotage the unity and harmony God says must define his body, the church.

How good and pleasant it is when God’s people live together in unity! (Ps. 133:1)

Through the peace that ties you together, do your best to maintain the unity that the Spirit gives. (Eph. 4:3)

Kay Warren co-founded Saddleback Church in Lake Forest, California, with her husband, Rick Warren. She is an international speaker, best-selling author and Bible teacher who is best known for more than 10 years as a tireless advocate for those living with mental illness, HIV and AIDS, and orphaned and vulnerable children.