Home Features The Art of Prayer 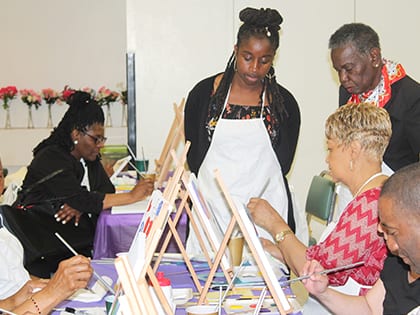 How a Philadelphia church is thinking—and praying—outside the box

Connecting People to God Through an Artistic Expression of Prayer

THE CHALLENGE
Explore different ways to interact with God through prayer.

ONE BIG IDEA Use art to create an offering to God.

One Saturday morning during her church’s prayer meeting, Monique Major, an artist and professor, started to formulate an idea.

“What if we used art as a form of prayer?” she thought. She pitched the idea to her father, a minister at Zion Baptist Church in Philadelphia, Pennsylvania, and mother, Monica, also an artist and art teacher. They liked the idea of thinking—and praying—outside the box.

Now every six weeks, folks who attend the Saturday prayer meeting are invited to paint, color or create a prayer journal.

“The art is an offering to God—a way to put vision into your prayers,” explains Monica, co-coordinator of the program with her daughter.

The meeting, which is open to all ages, has drawn as many as 38 people with attendees as young as 3 years old. During the two-hour workshop, Christian music plays in the background. The leaders open with prayer, then provide a theme for the day.

“We encourage people to pray, allowing the Holy Spirit to move through them as they create,” says Monica. “It’s been really exciting watching people work on their relationship with God in another way.”

Witnessing people tap into an artistic gift they didn’t know they had is also fun. Monica recalls a woman at one workshop who produced something beautiful despite having never touched a paintbrush in her life. Another time a man described himself as being “transformed into a whole other world” when he colored. One attendee opted to laminate her coloring sheets so she could use them as mealtime placemats.

Folks can use template stencils if they need a boost getting the creative juices flowing.

“It’s not about painting a Picasso. It’s about your offering,” says Monica, noting that multiple people revealed that prior to the workshop, they were highly stressed. Once they started prayer painting, however, peace washed over them.