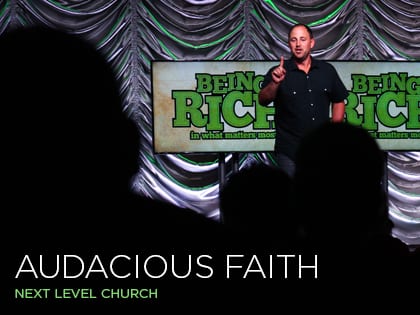 When Next Level Church began seven years ago in Somersworth, N.H., Pastor Joshua Gagnon sought out someone to run the soundboard.

“We didn’t have any musicians,” he explains. “I was playing the drums, and I’m not a drummer.”

So, Gagnon visited a local music store in search of a soundman and found an employee named Jim who agreed to run sound at NLC for a fee. Not only had Jim never entered church, he practiced Satanism, Gagnon learned.

Despite this shocking revelation, Gagnon continued paying Jim to run sound and before long, the man “gave his life to Christ,” Gagnon recalls. “His kids gave their lives to Christ. His marriage was split and now is restored.”

Including Jim’s conversion, Gagnon has witnessed dozens at NLC. Although New England stands out as the least religious region in the United States, Gagnon’s church has steadily and markedly grown since its launch.

“We’ve never wavered in our vision,” Gagnon says. “We’ve stayed true to the vision that God put in our hearts with clear direction and a clear path.”

That means not contextualizing the gospel, the pastor says. But the challenge of evangelizing in a community where most people grew up Catholic and distrust the church never disappears.

Gagnon describes his community as “post-Christian,” with residents more likely to attend a children’s sports match on Sunday morning than church services.

To allay the fears residents have about the church, “We’ve learned to become extremely authentic and become an open book,” Gagnon says.

The post-Christian nature of New England also makes it difficult to find staff, according to Gagnon. Most churches have one full-time pastor and no others, not to mention a limited number of additional staff members. Accordingly, Gagnon tries to develop leaders from within his congregation.

From Outreach Magazine  The Name Says It All: New Hope Church

“We’ve tried to become innovative with every challenge,” he says.

While New England may not be the place for would-be megachurch pastors to set up shop, Gagnon says it’s perfect “if someone wants to reach a place where people are far from God.”

Before he began NLC, Gagnon didn’t turn to church planting books or peruse church websites to get ideas about growth. Instead, he simply opted not to put a limit on God’s abilities, he says. He didn’t worry about the fact that New England’s culture stands in direct opposition to the culture of the Bible Belt.

“I had the audacious faith to believe and to believe that God has something for all of us,” he says.