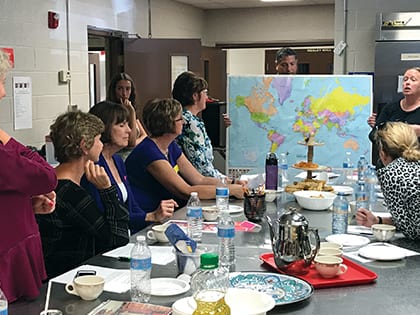 THE CHURCH
Faith United Methodist Church in North Canton, Ohio
THE CHALLENGE
Highlight commonalities among cultures, and appreciate the differences.
ONE BIG IDEA
Use food and fellowship to bring together disparate cultures.

When Donna Benzing joined the Welcoming the Stranger ministry at Faith United Methodist Church in North Canton, Ohio, she noticed fear in the eyes of those who attended. The group, which began in response to the Syrian refugee crisis, was well-intended, but given the number of negative refugee stories in the media, folks were hesitant to engage with other cultures.

“It’s such a treat to meet people from all walks of life,” says Benzing. “I wanted the North Canton community to get the chance to interact with other faiths and cultures.”

Benzing and two friends from other area churches—Ursula Marrero and Karyn Talbot-Russ—decided to use food to encourage cross-cultural interaction.

“Jesus knew that wherever we share food, something wonderful happens,” says Cara Stultz Costello, pastor at Faith United. “We become more pliable with one another, intrigued to learn more.”

In May 2017, Faith UMC launched Common Table: A Cultural Cooking Experience, a mission-oriented event that brought people together from different backgrounds for a night of fellowship, fun and ethnic foods. Immigrant cooks from Syria and Morocco shared their recipes with those who came. A $30 donation from each guest paid for the ingredients as well as an honorarium for the cooks. A tasty meal and good conversation followed.

“As we gather around the table, we find we have more commonalities than differences,” says Benzing. “The Common Table is more about opening people’s minds than changing them. A lot of people didn’t know where Morocco was before the last dinner. Now they’ve shared a meal with Fatima Mardi from Casablanca.”

From Outreach Magazine  Because of the Cross: Cross Church

Marrero notes that the shared cooking experience enriches lives. “If people walk away with more understanding and [fewer] misconceptions, that’s a win for them.”

The church plans to host the Common Table quarterly, infusing other cultures with future meals. At one event, Marrero brought a large map of the world and guests placed a pin in the spot where their ancestors originated.

“That visual reminded us that we’re all immigrants,” says Benzing. “And we’re all God’s children.”