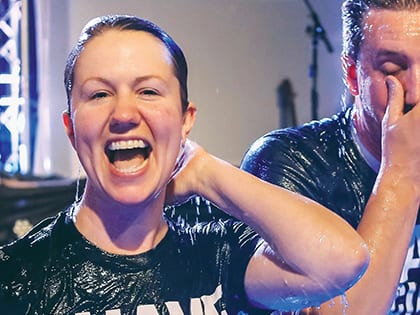 THE CHURCH
GracePoint in Valparaiso, Indiana
THE CHALLENGE
To be a place where Christian grow and the unchurched are welcomed and loved.
THE BIG IDEA
Create a church that shares one common vision and set of values.

In 2000, Ben Lamb was a student pastor at a traditional church in Valparaiso, Indiana, where he had worked for almost nine years. Over time, Lamb noticed that the return rate on visitors was zero.

“People wouldn’t come back. Not only that, but sometimes folks would leave during the service,” recalls Lamb.

As time marched on, the congregation continued to dwindle until there was practically no one left.

“We were this amazing social club for ourselves, but who does that serve?” asks Lamb. Church business meetings turned ugly with lots of tears, raised voices and heartache because nobody wanted to budge on their agendas. Ultimately, they decided to shut the church down and start fresh.

“There comes a time when you can’t adjust. You have to completely change,” says Lamb.

In 2009, GracePoint Church started out with just 24 people, then dropped to 18. As they infused high-quality music with heartfelt teaching, the numbers quickly began to grow. Now Lamb guides an average of 900 worshippers each Sunday as GracePoint’s lead pastor. He attributes the booming growth to the fact that the church encourages people to come as they are.

“There are so many churches in our town, but there wasn’t one that felt comfortable for unchurched people. We feel like Jesus’ heartbeat is for the unchurched,” says Lamb, who estimates that 87 percent of the people in his community don’t attend church. “That’s 146,000 who are unchurched.”

From Outreach Magazine  Handpicked by God

“Pastor Craig Groeschel, senior pastor of Life.Church, said, ‘To reach people no one is reaching, we have to do things no one is doing,’” says Lamb. “We agree with that philosophy.”

Therefore, on Sundays the congregation rallies to create a comfortable environment. That means intentionally not looking or sounding like a church. It also means expressing genuine love and acceptance for all who enter, and creating a casual atmosphere so that everyone can feel relaxed and welcome.

“We don’t think we’re the church. We’re simply a church,” says Lamb. “Traditional churches in the area send people to us. We send people to them. We want folks to find the right fit for their needs.”

For eight years, GracePoint operated out of an elementary school, which required more than 150 volunteers to show up each Sunday at 4:45 a.m. to transform it into a worship and Sunday school space.

“It goes to show the ownership our folks feel,” says Lamb. “Here are people who weren’t even going to church and now are willing to give most of their Sunday to serve.”

A man named Cyrus knows firsthand what that evolution feels like. His story is the reason GracePoint exists. He was completely unchurched and had been battling drug use, depression and addiction when three years ago, he received a DUI. Sentenced to perform community service, Cyrus began coming to GracePoint to help with morning setup. Over time he developed a brotherhood with his fellow volunteers. Touched by the love and lack of judgment, Cyrus began attending church at GracePoint and even got baptized. He now leads a men’s Bible study and serves as a volunteer team leader at church.

In November 2017, GracePoint opened the doors of their brand-new building. Though it’s wonderful to no longer be operating in a mobile capacity, some members were sad to give up their Sunday morning bonding time.

After the disintegration of the first church, Lamb knew the importance of having his team unite around one common vision and set of values. They also made a conscious choice not to offer a membership class because they didn’t want church to feel like an exclusive club.

Even though GracePoint targets unchurched people, a number of churched people enjoy being a part of the fabric of the church. They also love having a place where they can comfortably invite their friends.

Lamb admits that it can sometimes be tough to move forward, especially when faced with harsh criticism by naysayers. “It’s all good,” he says, “because in the end, Jesus will say, ‘Well done, good and faithful servant.’”