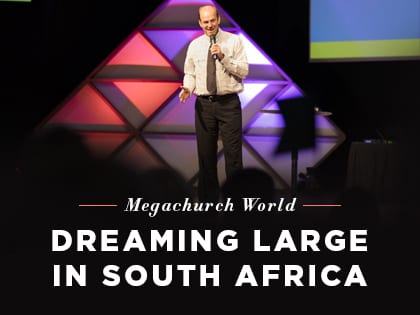 “At Doxa Deo church, people are not only concerned for the state of their cities; they take responsibility for their cities.”

“We debated with each other and we reasoned with God. We thought: We can’t even get our hands around this one city, so how can we go to 12 cities?”

This situation occurred in the early 2000s at a church called Doxa Deo, based in Pretoria, South Africa. The church had been founded in 1996 and was still in its infancy. “We sensed that God wanted us to focus as a multigenerational ministry that would find expression close enough to the people to care but big enough to count in our city,” explains Anton Venter, the church’s long-time chief strategy officer and international cluster facilitator.

But none of the leaders knew how that was going to happen. “We didn’t know there was such a thing as multisite,” he says. “That’s one of the ideas God had us stumble into.”

The church’s challenge to transform 12 cities came from a teaching on Mark 6 by Founding and Senior Pastor Alan Platt. “We knew God was speaking to us from this passage on Jesus’ feeding of the 5,000, giving us beacons into our future,” Venter explains. First beacon: The disciples were concerned, but they needed compassion, “just as we needed a passion for the multitudes in our city.” Second, just as Jesus said to break the people into groups of fifties and hundreds, “so we needed to approach our city in ways that we could monitor our impact.” Third, Jesus trusted for the supernatural to happen, “just as we must.” And the fourth beacon is symbolized by the 12 baskets carried out. “We understood it as a prophetic word to export our city transformation strategy to 12 cities,” says Venter.

Today, according to Platt, “Doxa Deo goes beyond having church on a Sunday to serving our cities in such a way that we are seeing the establishing of the lordship of Christ in every area of society. At Doxa Deo, people are not only concerned for the state of their cities; they take responsibility for their cities. In short, we are serving our cities into the kingdom of God,” he says.

After its launch, the church’s initial growth led to a merger, which became Doxa Deo’s first campus. Soon enough that facility became full. The church had a few cell groups in the north of Pretoria, so it started another campus there. Then the same thing happened on the south of the city.

“At present we have 12 campuses in Pretoria, and are trusting God for even more,” Venter says.

Besides expanding across their own city, Doxa Deo’s leadership looked for opportunities and divine guidance in other strategic cities underrepresented by a gospel presence. Today Doxa Deo is a city-focused church that has campuses in nine cities across the world. Six are in South Africa: Pretoria, Johannesburg, Bloemfontein, Durban, Port Elizabeth, Cape Town; and three are international: London, U.K.; Auckland, New Zealand; and Stuttgart, Germany.

Three are yet to come. “We don’t know where that will be, but as we journey, we believe God will show us,” Venter says.

Church leaders often use the phrase “the Doxa Deo family,” so it was natural to call the central support function the “family support team.” Likewise the approach to funding has been family-style with one overall budget parceled out to support the various campuses according to their need. The central support is limited to 7.5 percent of the total budget. An additional 6 percent is used to empower the global vision through a strategic leadership team.

“Being one church with one common income stream enables us to do the same quality of ministry in less-affluent areas,” explains Venter. “Some of our campuses have less than 50 percent of income being spent on that particular campus.”

Initially everything was centralized from one campus. Thus, when the multisite expansion first started, the church had one teaching team that rotated between the second and third campuses. When the church added its fourth campus, the leadership established teaching pastors and teaching teams at every campus. The church also moved its strategic leadership team and family support team to a neutral location to avoid the “head campus” or “mother church” idea. This way all campuses have the same standing.

From Outreach Magazine  Dave Gibbons: "I Am Mark Driscoll"

But this structure doesn’t guarantee that everyone begins or stays on the same page. There is an intentional “traveling program to expose key people to each other, to bolt together that family culture,” says Venter. “We gather groups of leaders from our various campuses around the globe several times a year to keep the vision both fresh and aligned.”

Each new global city may start with a number of South African expatriates, as when the church first opened its London campus. But the strategy was to establish the church with South Africans, but not necessarily just for South Africans. It has subsequently transitioned into becoming a local British church.

The DNA of the church is that of a unified core vision with local contextualization. The leadership in, say, Stuttgart, does not represent Stuttgart at the Doxa Deo family, but the global Doxa Deo vision in Stuttgart. As such, it might be easier to find a German native and “Doxify” him by exposing him to the church’s DNA, which he then assimilates into the local German culture. “It is not a gathering of local visions coming together into one church, but various leaders are carrying Doxa Deo into their geographical space, to contextualize it and make it happen there,” says Anton. “If you co-design, you co-own. Creating local contextual ownership of the vision gives longevity to the process.”

The current Doxa Deo family involves about 30,000 people globally each weekend, but already it seems that the 12-city dream is too small for the number of people that the church could impact who need Jesus. “We are trusting that during the five-year window of 2016 to 2020, God will do in five years what he did in our first 20,” says Venter. “That’s something only God can do. It’s an adventurous journey for us.”