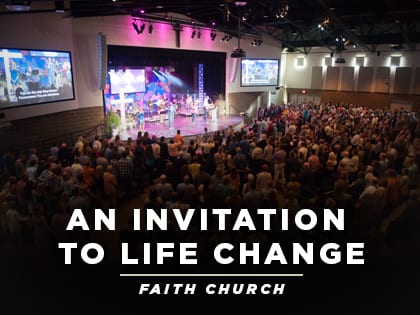 No. 71 Fastest-Growing: Faith Church in Indiana Is a Safe Place for the Broken

On a hot summer day in 2015, Casey Keene whiled away the hours, downing one alcoholic beverage after another. Despite being severely intoxicated, he then drove his wife and son to Faith Church in Dyer, Indiana, to attend an evening service. Keene had no idea what God had planned for him that night, however, as he stumbled into the sanctuary and plopped down in the pew.

Keene watched as an emotional family walked to the pulpit. Wiping away tears, the family shared their testimony about how their lives had been forever changed due to one person’s senseless decision to drink and drive. Though Keene struggled to focus, the message he heard struck a chord. For years he had spent his days longing for his next drink or drug. Broken and consumed by self-loathing, he had no energy left for his wife and child.

Though Keene felt empathy for the family’s tragic story, his ears perked as they spoke about Jesus’ hope, strength and healing. What he found really remarkable was how despite their pain, they had found peace.

“I remember thinking how awesome it would be to be able to live a life with peace,” Keene says. “It was something I had wanted for so long but just never knew where to find it.”

Only now he had. For as far back as he could remember, booze had controlled Keene. But now, for the very first time, he could envision a life with Jesus at the helm.

When he first was called to the church in 1990, however, attendance was declining. But Bouwer wasn’t fazed, because he had a passion for outreach and discipleship and was motivated to reverse the downward trend. Now, Faith Church is a multisite church, each with its own pastor, children’s ministry and worship leader. “The sites are not identical, but we are identifiable as one church,” Bouwer says.

Seven of the sites are located in south Chicago, Illinois, and northwest Indiana; last November an eighth site, Santo Domingo, opened in the Dominican Republic.

The church focuses on serving the region by getting involved with the school systems, the fire department and the police department.

“People aren’t always going to come to church,” Bouwer says. “Sometimes the church must go to them.” And because the church does regularly go out into the community, Faith Church has a reputation for being a safe place for the broken, disconnected and disheartened.

The lost find their way to Faith Church both by word of mouth and by the power of invitation.

“Simply inviting someone to a worship service, a youth group meeting, a young adult group or a Bible study can set the wheels in motion,” Bouwer says.

Take the transformative story of Louie, a former gang leader who was active in the streets of Chicago for years and was in and out of jail for various offenses. One day a friend invited Louie to a men’s ministry group. Louie accepted the invitation and the experienced the presence of the Holy Spirit for the first time. Now he is clean, sober, out of the gang scene and alive in Jesus Christ.

From Outreach Magazine  Jordan Raynor: Finding the Work You Were Created to Do

“That kind of immense transformation doesn’t happen by accident,” Bouwer says. “The Lord brought the worst troublemaker into his house and saved him. And it all started with an invitation extended out of love.”

Now celebrating seven months of sobriety, Casey Keene’s relationship with Jesus has also deepened over the past year.

“Through Jesus’ awesome power, he delivered me from 20 years of drug and alcohol abuse that I, alone, could never beat,” Keene says.