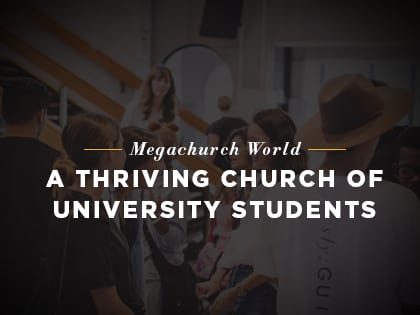 “Outreach to the university is our no. 1 trait,” says a New Zealand megachurch pastor.

A New Zealand church named Arise started 14 years ago with seven people in a small dance and drama studio. Today it draws 5,500 people weekly at six different locations across the country. The church’s impact has gained so much attention that Arise rented both a 5,000-seat stadium and a 2,000-seat auditorium for a July 21-23 conference to train other churches.

Even more amazing than its rocket-level growth is that the church is heavily built on reaching university students. “Outreach to the universities is our No. 1 trait,” says founding pastor John Cameron. “Youth and young adults are a key driving force; the engine room behind the success of the church, with many Arise Church volunteers and interns being of this age group.”

John’s story of the church’s development follows a pathway that could readily apply to North American churches.

John and his wife Gillian moved to the capital city of Wellington in 2002, and today go by the title of lead pastors. “We didn’t do a lot of strategic planning to land on Wellington,” John explains. “We simply felt it was where God wanted us to go.”

“I was just walking around the city, and suddenly everyone was young,” John recalls, as university students flooded the town for their next academic session. The town’s population is about 200,000 and the influx of college-level students swells it by as much as 20 percent.

“I was only 29, and our passion was to reach young adults,” John says.

Step Two: Use the Resources You Have

John went to the largest university and began to hand out flyers inviting people to church. “We aggressively marketed our church,” he explains, “and we still do—not to push our church, but as a door to find Christ.”

At the same time, his approach was highly relational. “We didn’t try to proclaim the gospel ahead of winning friends,” John says. In the years since, it’s become a mantra at Arise Church: connection first, commitment second. “If you don’t have a connection, people are just going to opt out,” he explains. “The degree we have a connection is the degree we can call for a commitment.” To him, a nonrelational approach is like saying, “I’ve just met you, and now will you give everything you have to the God I’ve known for years but you’ve not previously heard anything about?” The predictable answer is no!

From Outreach Magazine  A Prescription for Changing Unjust Policies

In short, they used what they had. “We managed to reach a few students in those opening months,” he says. “They helped us limp along.”

Of the earliest people willing to be discipled, four were new believers and one had been to Bible college. This is where they started, investing in helping people find victory and go to new levels of faith. Many of those initial contacts have traveled far. “I taught our first new Christians class with two people in it, and both are now in executive leadership of Arise Church,” John comments.

“We originally set out to build a church for lost people, not for the religious,” John says. That fundamental value has shaped the church’s message and is at the core of what they continually try to personify: a heart for people and for the lost. “It has always been about valuing every one person, people who want to go on the journey of finding Jesus and putting him first in their lives.”

When the next school year started, John and Gillian gathered those five people and gave them a very modest budget to work with. By working with one of the university student unions, they identified lots of needs and asked permission to provide volunteers to serve them. Sometimes it was a beach trip for international students. Sometimes it was giving away coffee—and good coffee at that. “People say that our church is highly devoted to quality coffee,” John jokes. One legal requirement is that when alcohol is served at school-related assemblies, food must also be served. So the church would offer to provide the snacks at various gatherings. All of these initiatives led to direct and meaningful relationships with various residential halls, and especially the student leaders.

“As we started winning university students, we started growing as a church,” John says. That led to a church attendance of 400 in year two, and 800 in year three. “Now we have 70 staff, and 50 of them joined our church through our university outreach.”

From Outreach Magazine  6 Ways to Grow a Thriving Facebook Group

The church has a clear pathway for developing people until they are a mature life-group leader. After that, it becomes a lot more intuitive and tailored to the individual.

The typical process begins as someone finds Christ, gets relationally connected, joins a small group, becomes identified as a potential small-group leader, and gets invited to “D-squad,” which is the Arise Church term for a Christian development environment in which you’re taught the character traits of a godly leader and the skills you need to run a small group. Then, if you’re effective there, you get groomed for the next level of leadership, such as oversight of various groups within a geographic zone.

There is a second track, a more intensive one: an internship school that is purely for those who feel a call of God to serve in ministry. The internship school started modestly with one intern. But it has mushroomed in growth, graduating 300 people in the last 12 years. “That’s where most of our staff come from these days,” says John.

Among other benefits, the internship program helps the church “stay on the edge,” John says. “If we allow our reach or style to stay with the age of our staff, we’ll wane. If you’re not thinking about the next generation, then you’re out of touch. You’ve got to keep moving forward all the time.”

How does John feel about the church’s explosive growth rate that led to it becoming New Zealand’s largest church, with a multisite campus in almost every major city in New Zealand? He sees no reason to coast. “We are committed to moving forward every day to see New Zealand won for Christ. Our passion is to do everything within our grasp to reach this nation for Jesus.

“We want to touch homes, families, lives, universities, schools, prisons and hearts with a message of faith and hope. Our mandate is to rethink church norms, build on the foundations others have laid and see the church of New Zealand overflow with life. These are the days of revival, these are the moments of the harvest.”