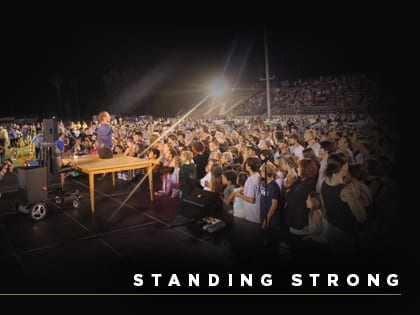 When Pastor Jason Blankenship first arrived in Ojai, California, he saw a spiritual city in much pain. Every day he encountered people who embraced “new age” thinking but were void of hope.

“I wanted to show them that hope and peace come through Christ,” says Blankenship, a missions director in Fresno, who, until recently, was senior pastor at Ojai Valley Baptist Church.

Organizing the event involved securing permits, advertisements and venues; scheduling worship, security and event teams; and locating and training over 500 volunteers. The local school district allowed the event to be held at Nordhoff High School. The principal even agreed to act as master of ceremonies.

On Thursday and Friday, motivational speaker Nic Vujicic, founder of Life Without Limbs, shared with 1,700 middle and high school students how he was a target for bullies since he was born without arms and legs.

“I hated being ridiculed and wanted out of my misery,” Vujicic admitted to the crowd. Though suicide seemed a viable option, he recognized that God planned to use him in a mighty way—to present the gospel to every man, woman and child he met.

On Saturday afternoon, 125 volunteers cleaned out flowerbeds, trimmed trees and spread fresh mulch at the high school. Then on Saturday night, 4,000 community members showed up to hear Vijicic give his testimony. Afterward, he invited others to come to Christ; 550 people met with trained volunteers who presented them with Bibles and connected them with a local church.

From Outreach Magazine  Why Joy Is Greater Than Happiness

Although Stand Strong Ojai was wildly successful, in the days following the event, criticism hammered Blankenship and his team. Some folks voiced anger that a Christian event was held on school property. Others were miffed that the principal acted as emcee. And some argued that Vijicic should not have been touted as a motivational speaker but rather an evangelist.

The school board held an open meeting, allowing parents, students, staff and community members to voice their opinions. Ultimately, the majority felt the event was positive.