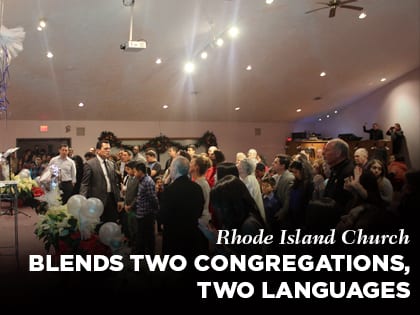 When Rey de Gloria (King of Glory) first merged with Living Waters to form one church in Smithfield, Rhode Island, Living Waters member Linda Sue Berard was unsure if she was ready to embrace such a radical change. The idea of marrying a Spanish-speaking church with an English-speaking one seemed daunting. But it didn’t take long for her eyes to open to God’s amazing plan.

“My perspective shifted when I witnessed the unity between the Hispanic parents and their children,” says Berard. “I realized that I longed for that same kind of unity both inside and outside of the congregation.”

Estuardo and Claudia Cambranes, co-pastors of Living Waters since 2013, say it’s been difficult for congregants to overlook their differences, especially because there is a language barrier. More than a dozen nationalities are represented in the Living Waters congregation, including Mexicans, Armenians, Salvadorians, Hondurans, Dominican Republicans, Puerto Ricans, Bolivians, Columbians, Italians, Nigerians and French-Canadians. As a result, when the churches first blended, it was a challenge to find their identity. But God led congregation members to see that faithful discipleship isn’t about settling on an earthly identity, but rather about lifting up the name of Jesus.

To describe how the church draws inspiration for carrying out its mission, Estuardo references Jesus’ proclamation in Matthew 6: “Thy kingdom come, thy will be done, on earth as it is in heaven.”

“When you come to be one [unified church], we impact our families, our society, our world,” says Estuardo. “If society is going to change, it has to start with the church.”

Therefore, rather than focusing on growing numbers (Living Waters’ average weekend attendance has remained steady at around 250), the pastors measure how their congregants are growing in their understanding of what it means to be “one.”

From Outreach Magazine  A Rising Church at Fall River

Living Waters offers a bilingual service on Sunday, one in the morning and another in the afternoon. Both services blend English and Spanish in their prayers and music. In the future, the church plans to offer ESL (English as a Second Language) classes to the community. For now, members communicate through the common language of meals, laughter and worship.

Estuardo says his greatest joy has been witnessing the love of God expressed without borders—which is not to say that when the churches first merged there wasn’t some awkwardness. “But in that awkwardness we saw the Word of God,” says Estuardo. “Because in our human capacity, there’s no way we can make this merging a seamless transition. It’s a process and we’re not finished yet. Every day it keeps getting better.”