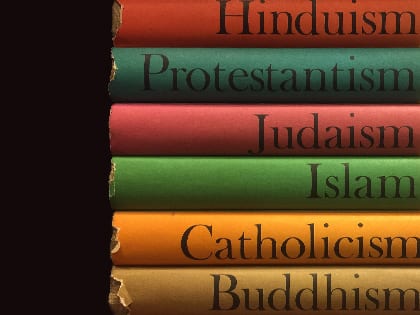 Pew Research: The new typology sorts Americans into seven groups based on religious and spiritual beliefs.

Most U.S. adults identify with a particular religious denomination or group. They describe themselves as Catholic, Baptist, Methodist, Jewish, Mormon or Muslim, to name just a few of the hundreds of identities or affiliations that people give in surveys. Others describe themselves as atheist, agnostic or say they have no particular religious affiliation. These are the conventional categories into which Americans sort themselves. But a new Pew Research Center analysis looks at beliefs and behaviors that cut across many denominations—important traits that unite people of different faiths, or that divide people who have the same religious affiliation—producing a new and revealing classification, or typology, of religion in America.

The new typology sorts Americans into seven groups based on the religious and spiritual beliefs they share, how actively they practice their faith, the value they place on their religion, and the other sources of meaning and fulfillment in their lives.

Race, ethnicity, age, education and political opinions were not among the characteristics used to create the groups. Yet some of the groups have strong partisan leanings or distinctive demographic profiles, illuminating the intrinsic connections between religion, race and politics in America.

Sunday Stalwarts are the most religious group. Not only do they actively practice their faith, but they also are deeply involved in their religious congregations. God-and-Country Believers are less active in church groups or other religious organizations, but, like Sunday Stalwarts, they hold many traditional religious beliefs and tilt right on social and political issues. They are the most likely of any group to see immigrants as a threat. Racial and ethnic minorities make up a relatively large share of the Diversely Devout, who are diverse not only demographically, but also in their beliefs. It is the only group in which solid majorities say they believe in God “as described in the Bible” as well as in psychics, reincarnation and spiritual energy located in physical things.

At the opposite end of the spectrum, the Solidly Secular are the least religious of the seven groups. These relatively affluent, highly educated U.S. adults—mostly white and male—tend to describe themselves as neither religious nor spiritual and to reject all New Age beliefs as well as belief in the God of the Bible. In fact, many do not believe in a higher power at all. Religion Resisters, on the other hand, largely do believe in some higher power or spiritual force (but not the God of the Bible), and many have some New Age beliefs and consider themselves spiritual but not religious. At the same time, members of this group express strongly negative views of organized religion, saying that churches have too much influence in politics and that, overall, religion does more harm than good. Both of these nonreligious typology groups are generally liberal and Democratic in their political views.

The middle two groups straddle the border between the highly religious and the nonreligious. Seven-in-ten Relaxed Religious Americans say they believe in the God of the Bible, and four-in-ten pray daily. But relatively few attend religious services or read scripture, and they almost unanimously say it is not necessary to believe in God to be a moral person. All Spiritually Awake Americans hold at least some New Age beliefs (views rejected by most of the Relaxed Religious) and believe in God or some higher power, though many do not believe in the biblical God and relatively few attend religious services on a weekly basis.