Home Resources Multiracial Congregations Are on the Rise 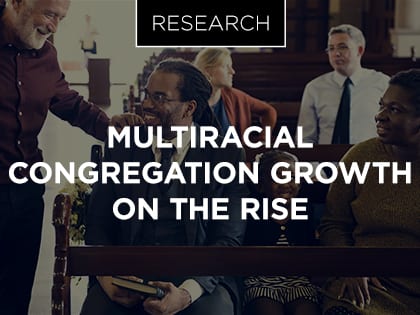 Baylor University: The percentage of Protestant churches that are multiracial tripled, from 4 percent in 1998 to 12 percent in 2012.

The percentage of multiracial congregations in the United States nearly doubled from 1998 to 2012, with about one in five American congregants attending a place of worship that is racially mixed, according to a Baylor University study.

In addition, more African-Americans are in the pulpits and pews of U.S. multiracial churches than in the past, according to the study.

Multiracial congregations are places of worship in which less than 80 percent of participants are of the same race or ethnicity.

“More congregations seem to be growing more attentive to the changing demographics outside their doors, and as U.S. society continues to diversify by race and ethnicity, congregations’ ability to adapt to those changes will grow in importance,” said co-author Michael O. Emerson, provost of North Park University in Chicago.

For the study, Dougherty and Emerson analyzed data from the National Congregations Study, a nationally representative survey conducted in 1998, 2006-2007 and 2012, with a cumulative sample of 4,071 congregations. The study, “The Changing Complexion of American Congregations,” is published in the Journal for the Scientific Study of Religion.

The study found that:

Previous research shows that congregations have adopted varying ways to encourage racial diversity, among them integrating music genres, using more participatory worship, hosting small groups to foster interracial networks and creating programs to address racial or ethnic issues. Churches with shorter histories are more likely to have diversity, and change is harder to bring about in long-established congregations.

The study concluded that the complexion of American congregations is indeed changing—and the authors see benefits for American society.

“During a several-year period of heightened racial tensions, the growth of multiracial congregations is a dramatic development,” Emerson said. “Such congregations are places of significantly increased cross-racial friendships and cross-racial common experiences.”