Home Resources Should You Consider a Church Merger? 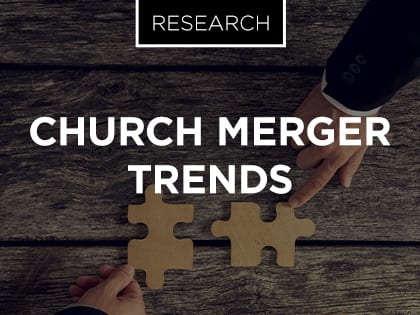 Here are some pivotal questions and considerations for any church thinking about merging with another.

In our consulting work at MultiSite Solutions, we get weekly calls from churches asking two questions: “So, why should a church merge?” and “Should we do this or not?”

When I meet with the two involved parties, usually two senior pastors or a senior pastor and a board member, we talk about the following questions they should also be exploring:

1. Should my church merge? Would my individual congregation be better by joining with another church? Would we be stronger together?

2. Could we accomplish more together than we could separately? Would we find more ministry synergy, created by the two churches joining with common vision and purpose?

3. Would our community be better served by us working together? By joining forces, can we make a bigger impact in our surrounding community, and not just for our individual congregations?

4. Could the Kingdom of God be further extended by us joining together?

If you can answer “yes” to one or all of these, then it’s a good indication that you ought to seriously consider the merger. In partnership with Leadership Network, we commissioned the Barna Group to learn more by surveying churches who had gone through a merger in the past 10 years. Here are a few additional considerations and lessons we’ve learned:

Over 40 percent of multisite campuses have come through a merger or acquisition of a church building. Mergers can be an effective part of a multisite strategy.

Every merger involves a lead church and a joining church. We describe it like a dance, with a lead and a follower. You can’t have two leads in a dance or you’re stepping on each other’s toes. Even when the churches are similar in health and size, one leads and the other joins. We establish that right up front. Sometimes the joining church thinks they’re the lead church because they have a bigger building or they have been around longer. Sometimes they may even have a bigger congregation, but they have peaked and are on the way down. And, the smaller congregation is healthier and on the way up.

The majority of mergers involve a name change. Churches may find that their denominational name tag carries some baggage in our culture today. Others change their name based on the need for multisite names to be more agile as they consider future sites. Naturally, the name change can be a very emotional part of the process for the joining church.

The majority of mergers in our survey were initiated by the joining church, but that pattern is changing. More often we are beginning to see a shift with more lead churches initiating the merger conversation.

MERGER TRENDS ON THE HORIZON

Lead-church initiated mergers: More leading churches will start initiating the merger conversation instead of the declining church knocking on the door of a growing church asking, “Can we join you?”

Church plant mergers: This is an unintended consequence of the church merger movement, but it’s becoming a strategy for church planters.

Succession mergers: I just finished a merger last year in Tulsa where two pastors, a church planter and the pastor of a church that had been around for 30 years, became good friends, like a Paul and Timothy relationship. When the pastor wanted to retire, he said, “You know what? You need a building. I need a successor. Why don’t we merge?” They merged, changed their name together and had great success.

Denominational-driven mergers: Here the overarching denomination is paying special attention to their churches that are in decline. They may choose to merge congregations or even explore making some of their facilities available to others.

Jim Tomberlin is the founder and CEO of MultiSite Solutions.