Home Resources Books The Origin Story of the Bible 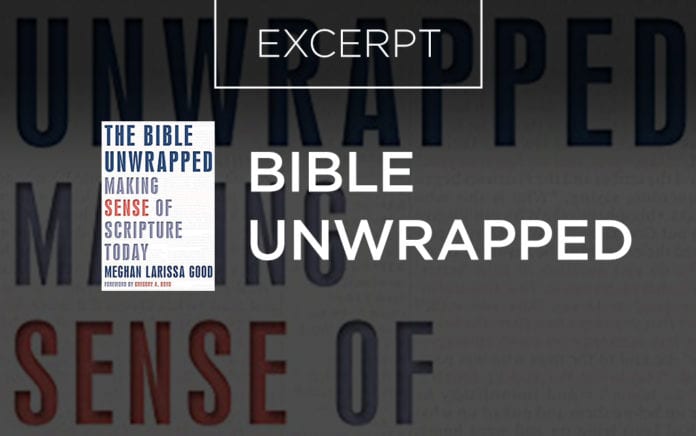 The story of how the Bible was constructed is as inspiring and miraculous as the stories within it.

Excerpted From
The Bible Unwrapped
By Meghan Larissa Good

I’ve always been a sucker for a good origin story—how Batman became Batman, who decided “blue raspberry” was a flavor, what sequence of tragically misguided thoughts led to the invention of the crinoline. Many people, if they’ve thought about it at all, suppose the Bible’s origin story must involve something along the lines of a few religiously superpowered men equipped with James-Bond-style earpieces sitting alone in a darkened room and receiving divine dictation.

But in fact, between the two covers of the Bible we have 66 books, each with its own origin story of who put it to paper and when and how. The Ten Commandments are boldly described by the book of Exodus as carved into stone by the finger of God. However, this wasn’t exactly the standard mode of receiving divine mail. For other parts of the Bible, God’s communication travels along paths of transmission that appear a bit more winding.

The Bible’s oldest stories were first transmitted orally. They were family stories, the sort passed around the holiday table, one generation to the next, about how great-great-grandfather Methuselah (you know, the one with the weird big toe) had once seen God act. Of course, most of us as moderns have played enough games of “telephone” to develop reasonable concerns about the reliability of messages passed by word of mouth. But preliterate cultures had a knack for memorization that those of us who take for granted perennial access to all the knowledge in the universe as recalled by Google can hardly even conceive. Stories were told with rhythms and repetitions and other memory patterns built in, enabling them to be transmitted over time with an incredible level of accuracy. As centuries passed and literacy increased, editors eventually wove these ancient memories into written collections, some of which are included in the Old Testament.

These stories are therefore not the product of the hand of a single author but of generations of people who recounted again and again particular tales about God’s activity that continued to impact their real lives. The stories they retold were the ones that made a difference, the ones so big, so defining and sometimes so dramatic that they could not be forgotten. Each new generation saw the significance and application of the stories slightly differently, and in some cases their distinct insights helped shape how the story was told. In this entire process in which stories were told and retold under the stars and around campfires, God was present, speaking.

Some books of the Bible explicitly state that they are drawing on material derived from other written sources. Kings and Chronicles, for example, assess the monarchal periods of the nations of Judah and Israel using historical records derived from “the annals of the kings” (see one such reference in 1 Kings 14:19). In the prologue to his Gospel, Luke describes the extensive research process he undertook to ensure the stories of Jesus he records are reliable and authentic—a process that included looking at other written compilations (see Luke 1:1–4). In this process of careful research and reflective study, God was present, speaking.

The book of Psalms contains prayers composed by individuals at the end of their rope, as well as songs that communities sang on their way to worship or at the ascension of a new king. Some of the biblical proverbs are quite similar to other sayings circulating in other ancient near eastern countries like Egypt. In this process—by which certain songs captured the hearts of generations and certain wisdom sayings emerged from the rest bearing a spark of divinely-generated insight about the world’s true shape—God was present, speaking.

From Outreach Magazine  Stephen Grcevich: Mental Health and the Church

The biblical prophets assert themselves boldly as messengers endued with divine authority—“Thus says the Lord,” they often declare. But most prophets functioned in their own time primarily as preachers rather than writers. Many of their “books” come to us through the pens of generations of their students. The prophets’ messages, delivered in previous historical contexts, interacted with the new historical situations of these students to produce an explosion of fresh prophetic insights. All of this is woven together in the final biblical tapestry. A conversation between generations of the faith community is unfolding inside the text itself. In this process of addressing and readdressing divine messages in a direct and timely way for each generation of hearers, God was present, speaking.

The stories and teachings of Jesus recorded in the Gospels first traveled orally through the eyewitness testimony of those whom Jesus taught or healed. The New Testament epistles (letters) started out as personal mail, passed along hand-to-hand through a network of friends. Christian leaders wrote to communities with whom they had some connection, addressing rumors, correcting problems, sharing news and commending action. Those communities, who were helped by these letters, shared them with other communities who were facing similar struggles. In this process of sharing stories and mail, of working out how the teachings of Jesus applied to different cultures and situations, God was present, speaking.

The final book of the Bible, Revelation, describes a mystical sort of visionary experience. The imagery of the vision draws on seer John’s intimate background knowledge of older books of the Bible like Daniel and Ezekiel to communicate deep truths about the cosmic stakes behind the scenes of history. In this complex interplay of supernatural experience and biblically formed imagination, God was present, speaking.

Perhaps like me you’ve encountered a podcaster who punctuates every thought with the same catchphrase like, “Am I right?” Or perhaps you know a preacher whose sermon metaphors run too often to football and children for you to believe he’s a single guy whose main hobby is calligraphy. The biblical writers, just like the rest of us, have real personalities, life experiences, voices and preferences and concerns that inevitably impact their work. Amos, a shepherd, uses metaphors of rescuing sheep from lions (Amos 3:12) and of locusts consuming grass (Amos 7:1-2)—images as close to his daily life as driving or hunting tacos is to mine. Mark uses the word “immediately” with the kind of frequency that makes you suspect he’s the sort of guy who owns several fidget spinners. Paul favors athletic and military metaphors and isn’t opposed to a scathing verbal cut-down when occasion seems to warrant. The individual, fully-human personhood of the writers has shaped in visible ways the message we possess.

But Christians also make a more radical claim about this book. Christians claim that the voices of the individual authors are not the only voices heard here. The words may come through human minds and lips, but there is divine breath behind them. In this collection of songs, laws, proverbs and stories, God is at work with wisdom and intent that goes beyond the human authors alone. The name given to God’s involvement in this process is “inspiration.”

Overall, the Bible makes surprisingly few direct claims about its own nature and composition. It claims that its words are more than ancient inkblots on a page but are actually alive and up to things—exposing secrets, cutting to the heart of matters, judging thoughts and intentions (Hebrews 4:12–13). It claims to be useful for teaching, showing mistakes and equipping people to do good (2 Timothy 3:16–17). It claims that the prophets specifically were “led along” by the Spirit of God in what they understood (2 Peter 1:20–21). But perhaps the most notable claim the Bible makes about itself is that Scripture is divinely inspired—a phrase which literally means “God-breathed” (2 Timothy 3:16).

Strangely enough, this term “God-breathed” is not a word of which we have any record prior to its appearance in the letter of 2 Timothy. Some scholars suggest this might be because the author of the letter invented the term to establish a deliberate contrast with the beliefs of other religions of his day. Other religious groups in the Roman world believed that a spirit could possess the body of a worshiper, overriding their mind and speaking directly through their lips. This phenomenon was often called “ecstatic speech.” But unlike these pagan religious cults, the God of Christians did not short-circuit the human brain, take over the mouth or override the human personality. Rather, the human writers of the Bible brought their whole selves to the work—their personalities, their experiences, their concerns—and God brought God’s self—God’s insights, God’s clarity, God’s life. Where these two things come together, incredible things result. Frail, clumsy human words, imperfect vessels that they are, fill up with the powerful, living address of God.

The story of how each book in the Bible moved from thought to word to page is as unique as the message within it. But however a book came to be, whether it was touched by few hands or many, whether it was written overnight or told and retold and edited over centuries, inspiration is the claim that God was involved in each step of the process, ensuring that what came out was more than the sum of the human parts. People speak in the Bible, and their unique voices and perspectives can be heard. But so can the distinctive voice of a communicating God.