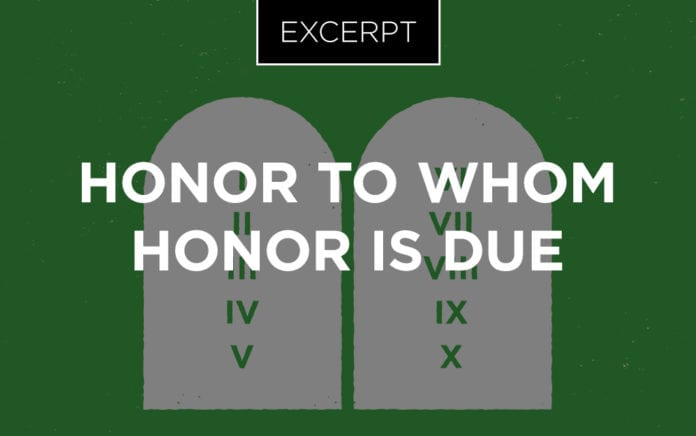 Honoring your parents is foundational to loving your neighbor. Here’s why.

Excerpted From
The 10 Commandments
By Kevin DeYoung

Honor to Whom Honor Is Due

Exodus 31 tells us that Moses came down from Mount Sinai with two stone tablets. Even though we refer to them as the two tablets (or tables) of the law, they were almost certainly not divided into two. Rather, they were two copies of the same thing. This was typical for covenants in the ancient Near East. You’d have one for each party. You couldn’t just throw it onto a copy machine, so you had to bang it out on two different pieces of stone. One copy went into the ark of the covenant for the Lord, but the other was for them to remember.

Technically, then, the two tables of the law were the same table. But historically Christians have thought of one table for our vertical obligations to God and the other table for our horizontal obligations to our neighbor. There is evidence that the Jews and early Christians thought somewhat along these same lines. In the New Testament there are several places where only the commandments of the second table are listed, such as when Jesus talks to the rich young ruler in the Gospels. Also, in Romans 13 and 1 Timothy 1, there are step-by-step progressions through the different commandments of the so-called second table of the law. Jesus seems to operate with this understanding when he says:

The parental relationship is the first and most important relationship. It shapes all other relationships. When you come across a kind, considerate, capable student in your class (if you’re a teacher in high school or a student in college), or come across someone in your workplace who seems hardworking, conscientious, responsible and considerate, more often than not, you owe a great debt of gratitude to that person’s parents. Now, there are all sorts of exceptions: good parents with bad kids, and bad parents with good kids. But, in general, that’s the way the world works—the way that God has set up and designed things.

In this relationship with our parents, we learn what it is to have someone in authority over us, to listen to people, to honor them and to do things that we sometimes don’t want to do. Someone else has a say over us, so we’re going to trust that they know better. Augustine said, “If anyone fails to honor his parents, is there anyone he will spare?” This is where we learn to live with other people. This is where we learn that there are authority structures in the world. The family is where we learn about respect and obedience and hopefully (if it is a good family) about love and protection.

It is no wonder that when totalitarian regimes throughout history have tried to exert control over people, one of the chief mechanisms by which they’ve done so is severing that attachment to the family—making allegiance to the state the building block of society rather than the honoring of parents. The power of the state and the power of the family are often inversely related: one goes up as the other goes down.

I don’t want to dwell on that macro point, but I do want us to see that the fifth commandment is bigger than just saying, “Kids, take a bath when Mom and Dad tell you to take one.” Civilizations, societies, cultures and countries do not flourish apart from social order, trust and mutual respect. All of that is meant to be taught and imbibed in the incubator of the family. It’s not too much to say that loving your neighbor begins with listening to Mom and Dad.

“Honor your father and mother” is a serious commandment. Just listen to what Moses says later in the Pentateuch:

“If a man has a stubborn and rebellious son who will not obey the voice of his father or the voice of his mother, and, though they discipline him, will not listen to them, then his father and his mother shall take hold of him and bring him out to the elders of his city at the gate of the place where he lives, and they shall say to the elders of his city, ‘This our son is stubborn and rebellious; he will not obey our voice; he is a glutton and a drunkard.’ Then all the men of the city shall stone him to death with stones. So you shall purge the evil from your midst, and all Israel shall hear, and fear.” —Deuteronomy 21:18–21

I’d bet they would hear and fear! To be sure, we live in the New Testament economy of salvation. All of these civil infractions have now been transposed into church order, with structure, membership and discipline. But we see here how serious this infraction was.

Incidentally, doesn’t this passage in Deuteronomy give you a better sense for how scandalous and remarkable the story of the Prodigal Son is? He ran away. He was a glutton and a drunkard. Yet at the moment when the father should have presented him before the elders to be stoned, while he was yet a long way off, he ran to him and said, “This my son was dead, and is alive again; he was lost, and is found” (Luke 15:24). There is good news for wayward children.

From Outreach Magazine  A Church-Planting Church: The Point Church

We also see that cursing parents was deserving of death in Exodus 21, Leviticus 20 and Proverbs 20 and 30. As Calvin said, “Nature itself ought, in a way, to teach us this. Those who abusively or stubbornly violate parental authority are monsters, not men.” Do your kids want to dress up like a monster for Halloween? All they have to do is not listen to their parents. There’s a real monster. If they don’t recognize those whose efforts brought them into the light of day, Calvin argued, they aren’t worthy of its benefits. That was a different time, and we have a different sort of attitude toward parenting today, but sometimes we need a voice from five hundred years ago to remind us of the seriousness of this commandment.

Excerpted from The Ten Commandments by Kevin DeYoung, ©2018. Used by permission of Crossway, a publishing ministry of Good News Publishers, Wheaton, Il 60187, Crossway.org.