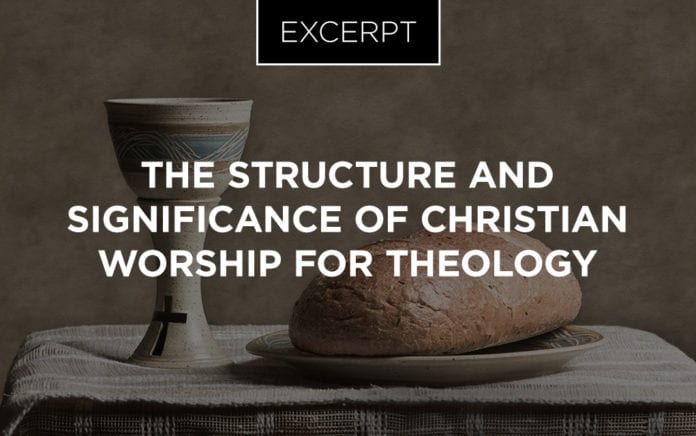 The early church structured worship very deliberately and helps us understand the development of Christian theology.

The Structure and Significance of Christian Worship for Theology

From its early Christian origins the church established a pattern for the order of liturgy (referred to as the ordo). The first half of worship was designated the “Liturgy of the Word,” while the second half was the “Liturgy of the Eucharist.” All were invited to participate in the first half, but those who were yet to be baptized were dismissed before the second half in order to be trained (or catechized) in the faith.

Catechesis means “instruction” in Greek. By the fourth century this catechesis might have taken two to three years before the catechumen (learner) was baptized on Holy Saturday (the night before Easter Sunday). During Lent (the weeks before Easter) those to be baptized underwent the “scrutinies”—examinations, exorcisms and prayers—and, before baptism, the “handing over” of the creed (traditio symboli) to the catechumens so that they would “hand it back” (redditio) by repeating what they had memorized. As time went on, catechisms, such as Martin Luther’s, included instruction organized around the Apostles’ Creed (what Christians believe), the Ten Commandments (how Christians live), and the Lord’s Prayer (how Christians worship).

The Liturgy of the Word, in which all participated, began with the gathering, calling the people to worship. This might involve a greeting (such as “The Lord be with you”), a prayer of preparation and a collect (a prayer prayed by the priest that “collects” the thoughts of the people and expresses the theme of the day). As Simon Chan develops it, gathering means the church comes from the world to be church—to be the new creation. This is a “grand entrance,” as Edith Humphrey calls it: The church enters into a space, time and fellowship that is larger than what it sees. But this then situates the church between the call to gather and the dismissal at the end of worship when the church reenters the world that is yet to be fully redeemed. It becomes a reminder to the church that we live between the “already” and the “not yet” of the kingdom. This is especially prominent in Eastern Orthodox worship, since the liturgy and the sanctuary are meant to represent heaven. For a few hours the church experiences its true reality and a reality that is yet to come.

From Outreach Magazine  Pastorpedia: Is Going to Church and Being the Church the Same?

Alexander Schmemann captures this so well:

“It is not an escape from the world, rather it is the arrival at a vantage point from which we can see more deeply into the reality of the world.

“The journey begins when Christians leave their homes and beds. They leave, indeed, their life in this present and concrete world, and whether they have to drive fifteen miles or walk a few blocks, a sacramental act is already taking place, an act which is the very condition of everything else that is to happen.

“For they are now on their way to constitute the church, or to be more exact, to be transformed into the church of God. … And now they have been called to ‘come together in one place,’ to bring their lives, their very ‘world’ with them and to be more than what they were: a new community with a new life. …

The Liturgy of the Word continued with the reading of Scripture. The Scripture for the day might involve more than one passage. In fact, as the lectionary evolved, the Scripture that was read included a passage from the Old Testament, a New Testament Epistle and the Gospels, with a psalm or portion of a psalm. After the readings, a homily or sermon explained what had been read. Typically the recitation of the creed (Apostles’ or Nicene) followed as the church’s response to the written and preached Word—kind of a “pledge of allegiance” to the One who has just, once again, made himself known in Scripture and sermon. Intercessions (prayers for the concerns of the church and the world) would often follow.

The Liturgy of the Eucharist or the Table began with the church’s offerings, including the presentation of the bread and wine to be used in the Eucharist. This was followed by prayers (such as asking God to set apart this common bread and wine for this holy purpose), the Lord’s Prayer (a prayer that only the baptized could pray, since it begins with the address “Our Father;” see Gal. 4:6), the exchange of peace (the first words with which the resurrected Jesus greeted his disciples; see John 20:19, 21) and communion. The service concluded with a dismissal (from which we get the word Mass) that sent the worshipers back out into the world as witnesses of what they had heard, seen and tasted in worship.

Excerpted from Learning Theology through the Church’s Worship by Dennis Okholm, ©2018. Used by permission of Baker Publishing BakerPublishingGroup.com.