Home Resources Books The Astonishing Significance of God as ‘Father’ 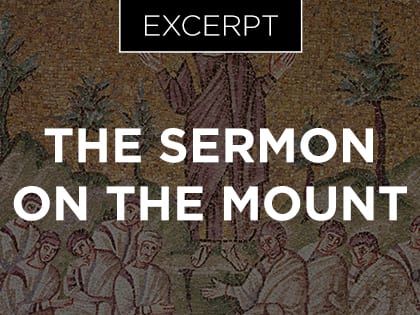 The presentation of God as Father is a pivotal concept in the Sermon on the Mount underscoring our relationship with him.

Excerpted from
The Sermon on the Mount and Human Flourishing
By Jonathan T. Pennington

Another very important theological concept for Matthew as a whole and the sermon in particular is the emphasis on God as Father, particularly as “Father in heaven.” While the idea of God as Father was rare in ancient Israel, it was not completely absent. In the Second Temple period, however, it becomes more common, and this provided the backdrop for Jesus’s own usage. The older notion that Jesus was unique in referring to God as Father has since been shown to be overstated. But it is true that understanding God as Father and addressing him in this way was more frequent and characteristic of Jesus and Christianity from its earliest days.

The Gospels refer to God as Father (patēr) over 170 times, most of them coming from the Gospel of John (109x). Second to John is Matthew, which refers to God as Father 44 times, much more frequently than the other Synoptics (Mark 4x; Luke 17x). This shows that for the first and fourth Gospels (which prove to be the most influential on the church), God as Father is an important theme. God’s fatherhood becomes a foundational idea for Christianity, no small part of which is the “Our Father” beginning to the Lord’s Prayer. Paul also makes much of the idea that the Christian is adopted into God’s community and thereby made a child of God and an heir of the Father’s kingdom (Rom. 8:14–17; Gal. 4:4–7). Because of Matthew’s frequent usage of the idea of God as Father, H. F. D. Sparks concludes that Matthew “had a special interest in the Divine Fatherhood,” and Armin Wouters argues that “the will of the Father” is a central idea in the whole proclamation of Matthew.

Particularly distinct is Matthew’s preference for referring to God as the “Father in heaven” or with the synonymous “heavenly Father.” This too becomes a common way for Christianity to conceive and speak of the first person of the Trinity. For Matthew it is part of an elaborate literary and theological theme of “heaven” and “earth” language that emphasizes the contrast between God and humanity, using the metaphors of “heaven” and “earth.”

God’s fatherhood revealed by Jesus would have been understood to the first century ear as communicating “both respectful dependence and affectionate intimacy as well as obedience.” Ancient notions of fatherhood could create juxtapositions somewhat lost in contemporary Western notions—intimacy and awe, familial comfort and reverent respect. Donald Hagner suggests that Matthew’s “father in heaven” particularly communicates this juxtaposition by combining “the personal, or immanent, element of fatherhood with the transcendental element of God’s otherness, ‘in heaven.’”

While God as Father is a recurrent theme in Matthew overall, it is especially important in the sermon. The largest concentration of references to God as Father is found in the sermon (17x), including the first occurrence of this language in Matthew, in 5:16. Strikingly, in every instance but one Jesus speaks of God to the disciples as “your Father in heaven / heavenly Father.” Luz states that together the words “righteousness” and “Father” indicate the subject matter of the whole Sermon. Likewise, he observes that “Father in heaven” is the “guiding word” of the entire Sermon. Similarly, R. T. France states that the Sermon is about the life and values of the followers of Jesus “who recognize God as their Father in heaven.”

Not only are the references to God as Father extremely frequent in the Sermon, they appear at crucial points. For example, the first occurrence in Matt. 5:16 comes as the conclusion to the first section of the Sermon (5:1–16), which summarizes the teaching with the exhortation to live in such a way that the disciples’ lives lead others to honor their heavenly Father. Another crucial verse in the central section of the Sermon (5:17–7:12), 5:48 with its “be teleios” command, also uses “heavenly Father” language. On the other end of the Sermon, in the concluding unit (7:13–8:1), 7:21 makes clear that doing “the will of my Father in heaven” is the essential requirement for entering into the kingdom of heaven.

But going beyond these important verses, it is in the middle of the central section of the sermon (5:17–7:12) where we find the greatest concentration of “Father” language. Here God is referred to as “Father” a full twelve times. Within this middle point of the Sermon (6:1–21) is built the contrast between laying up treasures with the Father in heaven versus humans on earth. The constant refrain throughout this section is that the disciples should not practice their piety to earn the praise of others because they have a Father who sees from heaven and will reward them. In the very middle of this elaborate discourse is the famous Lord’s Prayer (6:9–15), which begins with the invitation to address God as “Our Father,” thus putting this notion at the very core of the Sermon. This section of the Sermon concludes by emphasizing the heavenly Father’s knowledge of his children’s needs and his abundant provision (6:26, 32).

Thus, throughout the Sermon a major aspect of the teaching is the notion that the disciples of Jesus have God as their heavenly Father. The major function of this “Father” language in the sermon is to give the disciples a clear and distinct identity as the true children of the God of Israel, which is not unrelated to the redefinition of the people of God as discussed in the previous section.

Excerpted from The Sermon on the Mount and Human Flourishing by Jonathan T. Pennington. Used by permission of Baker Academic, a division of Baker Publishing Group, ©2017. www.bakerpublishinggroup.com