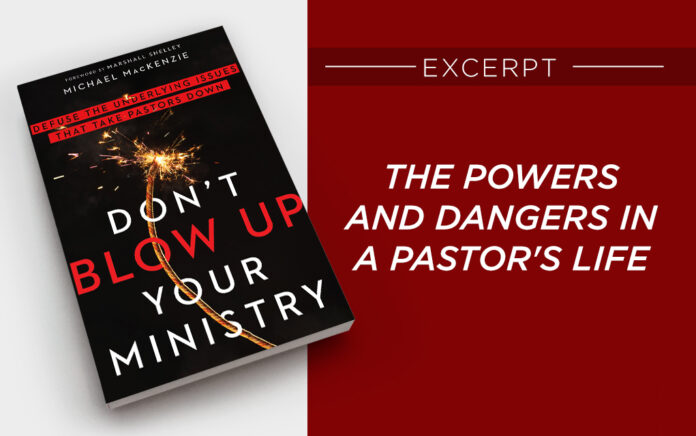 Excerpted From Don’t Blow Up Your Ministry  By Michael MacKenzie   The Powers and Dangers in the Lives of Pastors Being a Christian leader is a dangerous job. I grew up in Prince Edward Island, Canada, the son of a lobster fisherman. The TV shows Wicked Tuna and Deadliest Catch show how deadly commercial fishing […]

Don’t Blow Up Your Ministry

The Powers and Dangers in the Lives of Pastors

Being a Christian leader is a dangerous job. I grew up in Prince Edward Island, Canada, the son of a lobster fisherman. The TV shows Wicked Tuna and Deadliest Catch show how deadly commercial fishing is. Men can lose their limbs or even their lives from the dangers of working at sea.

One day when I was fishing with my father we were running off a set of lobster traps. Fishermen tie six traps together, weight them to sink to the bottom, and attach a buoy on each end. The traps line the edge of the boat and the captain steers to where he believes the best catch is. Then the crew sets the traps by pushing the first one over into the sea. The first one drags the next one overboard and one by one they drag the entire set of traps into the sea.

My father gave the nod to drop a set of traps and I pushed the first one overboard. We reached the last trap when he suddenly slammed the boat into reverse, almost knocking me off balance. I looked toward the cabin with an expression of, “What the heck?” My annoyance turned to gratitude when my father pointed to the rope wrapped around my foot about to pull me overboard.

Multiple men on P.E.I. (Prince Edward Island) have lost their lives fishing, including one of my best friends. What makes it so dangerous? Some of the factors include the dangerous equipment; the ever-changing movement of the sea and corresponding instability on deck; working through storms with their powerful waves; and the weariness caused by the long hours of heavy work. An additional risk at play was making the same fatal mistake many make—going out to sea alone.

Many get caught in nets or rope and have been dragged overboard into the sea. They don’t always end up losing their lives; some only suffer injuries. Why did they survive? Because someone was there to pull them out. And countless others are spared injury because someone was there to warn them of trouble. Being a Christian leader is a dangerous job. If someone tries to go it alone, to not seek help, damage and even destruction can result. Power saves. Power in the hands of Churchill saved many lives. Power destroys. Power in the hands of Hitler destroyed lands and cities and huge numbers of people.

Collateral damage is unintended damage, injuries, or death due to an action. The last thing a Christian leader thinks he will do is harm the church, the kingdom, or bring shame to the name of Christ. Yet because many Christian leaders underestimate the power they have and the pressure they are under, they end up destroying their own lives and ministries and hurting others around them.

WHY DOES A PASTOR NEED HELP?

A pastor is limited like everyone else: limited in gifting, in energy, limited in self-knowledge even. Wendell Berry, an astute observer of the human condition, particularly of the Christian leader, writes, “The task of healing is to respect oneself as a creature, no more and no less.” Being limited, one of the needs we have is for someone in our life who speaks God’s words to us, someone to whom we can confess, someone we’ve given authority to speak to our blind spots or to our outright rebellion.

Someone we can turn to when we are confused, overwhelmed, tempted, tired, or full of grief. A pastor is like anyone else trying to make it through this life—they need help. Pastors play an important and much needed role in people’s lives yet often negate having someone play the same role in their life.

My wife, Kari, and I are the directors and therapists at Marble Retreat, a counseling center for Christian leaders. We have spent the past twenty years specializing in caring for those who work full time professionally for the kingdom. We’ve done this because we believe in the importance of roles like those of pastor, missionary, worship leader, or family pastor. We do this work because we know ministry is a hard road and it wears on those who do it and they need someone to care for them. We do this because we care about and admire those who are willing to wholeheartedly serve the Lord—these people of the Word.

We grew a heart to care for these folks out of experience as well. Kari was on the mission field in China for three years and saw the need for missionaries and missionary teams to have someone they could turn to for help, encouragement, and direction. And when an influential pastor in her life fell morally, she went to talk with him to try and understand what happened. In his story she heard how the church was not there for him when he needed someone—before and after his fall.

One of my closest friends when I was growing up was the son of my pastor, who was my spiritual father in many ways. My pastor died of a heart attack at age fifty-two. Being in their home and life I saw many of the challenges of ministry and how it can affect your life and family. And my older brother went into church planting. His experience again showed me the many different potential trials of being in full-time ministry.

I desire to spare Christian leaders, their families, and the church the loss, destruction, and grief that come when a shepherd explodes. Too often we sit with leaders who with gut wrenching sobs lament the damage that has been done. Too often we hear the words, “I wish I would have known about or worked on these issues ten years ago.”

But there is hope for the Christian leader. Hope that disaster can be averted and from within the struggles can come deeper meaning, peace, faith, and love. Hope that what you preach and teach others is also true for you: that God is for you and he can heal you and set you free.