Home Resources Books The Story of Your Life, One Decision at a Time 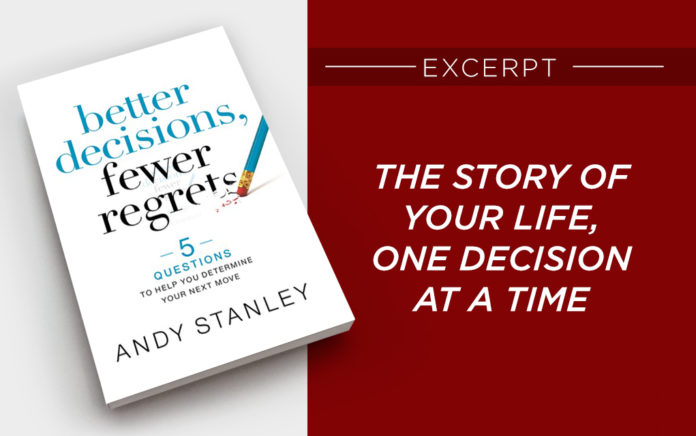 I was fortunate to grow up with a dad who took his responsibility as a father seriously. My dad’s dad died when my dad was 17 months old. His mom didn’t remarry until he was in high school. For all practical purposes, he grew up without a father. Experts say the first six years are the most critical years as it relates to personal development. My dad’s mom did the best she could under the circumstances. And circumstances were harsh in the ’30s and ’40s in Dryfork, Virginia.

Difficult circumstances make or break folks. In my father’s case, it made him fiercely independent, disciplined and determined to create something better for his family. Which he certainly did. But not just in the ways you might expect. My sister and I certainly grew up in a more stable financial environment. But my dad was equally determined to make sure we had the relationship he missed. The one that, in his words, left a “deep enduring void” in his heart. My father was determined to be a good dad. To be present and accounted for. To give us the relationship he never had.

No role model. No lessons. No parenting seminars. He just figured it out.

One of the most significant things he did was laying down beside us at night as we were drifting off to sleep. After we prayed, I would start asking questions. Of course, the questions were a stall tactic. I didn’t want him to leave.

Prayer time would quickly transition to story time. But not bedtime stories. For whatever reason, I was always fascinated by my dad’s story. What life was like for him as a kid. I was particularly interested in what he got in trouble for. So, instead of bedtime stories, I heard the stories of his life. Over and over. I remember most of them. I remember most of them because when he ran out of stories, I would ask him to retell particular ones. Years later, I would tell my kids my dad’s stories. Delivering newspapers at 5 a.m. before he walked to school. Breaking customers windows with frozen newspapers because they weighed too much and he threw too hard.

From Outreach Magazine  Son of God: The Movie

Coming home to an empty house every afternoon because his mom didn’t finish at the Textile Mill until 5 p.m. and rode the bus home. Fixing his own breakfast in the mornings because his mom was already at the bus stop.

When we were old enough to understand, he described his arduous and sometimes violent relationship with his stepfather who married my dad’s mom when my dad was in high school. Henry was an angry man who took it out on my grandmother … until my dad was old enough and big enough to intervene. There was the story of how he eventually sold his paper route which provided enough money to consider college. He told us about the chance conversation with a friend that led to a conversation with a friend of a friend that landed him a full scholarship. He showed up at the University of Richmond with a suitcase and less than $30 to his name. I loved the story of how he met my mom, the rich girl from Smithfield, North Carolina.

As a kid I discovered quickly that my dad’s story had an additional layer. His grandfather’s story.

His grandfather, George Washington Stanley, was from Siler City, North Carolina. George Stanley was an uneducated Pentecostal holiness preacher leading up to, during, and following the days of prohibition in America. His stories were like something out of a movie. Fire and brimstone sermons, death threats, gangsters in burning cars.

My dad spent one summer with his grandfather that marked him for life and would eventually leave a dent in me as well. Every afternoon after work they would sit on George’s front porch sipping lemonade and talk about life. George’s life. His life philosophy was simple and unforgettable. I’ve heard my dad repeat it a thousand times.

“Obey God and leave all the consequences to him. If God tells you to run your head through a brick wall, start running and trust God to make a hole.”

As I write this, my dad is about to celebrate his 87th birthday. But those stories, his stories, my grandfather’s stories are as vivid as they were the first times I heard ’em. But, it wasn’t just his childhood stories that impacted me. As his son, I’ve had a ringside seat for some of the most important stories in his story. And as is the case with every father and son, his stories become my stories. They were immediately grafted into the story of my life. Again, as is the case with every father, his choices influenced my choices. His decisions influenced the direction and quality of my life.

His decision to take a job in Atlanta when I was in the 5th grade, in particular. A difficult and somewhat risky decision that determined so much of the trajectory of my life, career and marriage.

What I didn’t grasp as a child, that is abundantly clear to me now, is my father’s story is simply a series of outcomes connected to a series of decisions. In many cases, decisions made in response to other people’s decisions. He was writing the story of his life one decision at a time. He was writing chapters in the story of my life, one decision at a time.

We never know what or who hangs in the balance of the decisions we make and thus, the story we tell. What we do know is private decisions have public implications. Perhaps generational implications. Our private decisions won’t remain private. Our personal decisions will impact some other persons. I never met my great-grandfather. But his decisions, which created his story, would eventually intersect with his great grandson. And while there are no perfect stories. He certainly wrote a good one. One worth telling. One worth retelling.