Home Resources Books How to Lead When Change is Painful 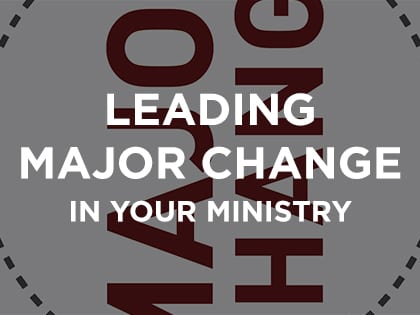 Sometimes leaders have to be willing to cause short-term pain in pursuit of greater long-term gain.

Excerpted from
Leading Major Change in Your Ministry
By Jeff Iorg

When grappling with the dilemmas about relocating the seminary, the most troubling aspects were the significant personal challenges the decision would create for employees and students. Outsiders presumed the greatest relocation challenges were keeping the seminary operational and making it stronger for the future. They also marveled at what would be required to pack and move an entire seminary, build two new campuses, create a new organizational plan and hire dozens of people to staff it. But those were not the issues that kept me up nights worrying through the decision.

Solving organizational challenges was not the most difficult part of the relocation. We had a high-quality management team capable of handling those issues, and our shared commitment to our mission sustained organizational functions. Once our constituents had the facts, we felt most of them would agree the decision was best for the seminary—organizationally, strategically, educationally and financially. The greatest stressor was dreading the personal impact the decision would have on employees, students, and their families. The ominous, oppressive weight of anticipating the chaos this decision would create in many lives made for many long nights. Most Christian leaders are pastors at heart—no matter our leadership role, title or office. We want to solve problems for people, not cause them. The decision to relocate the seminary was made more complicated by the turmoil it would create for dozens of families.

One employee had a teenage daughter in an educational program perfectly suited to her unique needs. They had worked for years to get this program in place—coordinating the teaching plans, class schedules and even complex transportation issues. This young woman was thriving and we were all proud of her and happy for her family. Moving the seminary ended this educational opportunity.

One grandmother had all her grandchildren within a short drive of her home. She was happy and content. God had given her husband a ministry he enjoyed, while at the same time providing good jobs for her two sons in close proximity to the seminary. This extended family served in a church together and was a model of Christian interaction and multi-generational family dynamics. The relocation fractured their idyllic world.

An employee’s wife had a lucrative position in the medical field. She had been promoted to a significant responsibility where she helped save lives. Over the years, her income had increased substantially—due both to the affluent area where the seminary was located and her competence. She gave it all up when the seminary moved.

One employee had been with the seminary for more than twenty years. He was not quite old enough to retire but felt too old to start over in another location. He did not have a large extended family, but his friends were all in the Bay Area. We asked him to relocate and offered him inducements to do so, but he decided to end his employment and face the challenges of starting a new job later in life.

Besides these employees, the relocation decision also impacted students. Many decided to accelerate their programs to graduate before the seminary moved (which meant finding additional tuition money and more time in already busy schedules). Other students had to revise their educational plans, taking more online courses or switching to a different campus to continue their training. While we had good processes in place to manage these issues, we could not eliminate the personal chaos the relocation forced on students.

Many employees and students also served churches, which meant decisions had to be made about future leadership commitments and roles. Just like employees, students also had spouses with jobs, children in school and health concerns with established treatment programs. The average age of seminary students today is mid-thirties. They are not kids; they have kids! When we were considering the relocation, we knew the fallout among student families would be significant.

We also knew, in a more indirect way, the relocation and resulting name change would impact our nearly nine thousand graduates. They proudly graduated from Golden Gate Seminary. Like all schools, we have shared memories and a spiritual heritage—much of it tied to our former campus overlooking the San Francisco Bay. People met their spouses, got engaged, had children and answered God’s call to their first ministry assignment on what was, for thousands of people, “holy ground.” This sacred space was consecrated by their life-changing encounters with God during their student years. Many graduates have children who had come to Golden Gate as students, some even living in the same apartment their parents had used many years before. Selling the campus felt like we were selling the communal heritage of the Golden Gate family. Our collective memories were at risk when we closed those doors the final time.

Several years ago, a trusted friend told me, “You can’t lead if you can’t inflict pain.” That struck me as wrong on several levels, and for some time I tried to disprove what became prophetic words. Christian leaders are supposed to do good, make life better and find ways to alleviate stress and conflict—not cause it. But the longer I considered his observation, in light of both biblical examples and personal experiences, the more accurate and applicable it became.

Leaders intend real change—and that is often painful. It causes organizational upheaval and personal angst. Leaders’ decisions sometimes inflict pain on their followers. Good leaders do not enjoy hurting others, but are responsible to make difficult decisions (in the short run) for the long-term benefit of advancing God’s mission and the particular mission of the organization they lead.

These observations raise the question—a seminal question for Christian leaders when it comes to making pain-inducing leadership decisions: Does God want us to do this? Does God—who loves both leaders and followers—ever want a leader to initiate major changes, knowing they will produce painful consequences for everyone involved?

The answer is clearly “yes.” The Bible has many examples of God instructing leaders to take people into battle (both physical and spiritual), take positions that divided communities, or risk life-threatening situations as part of accomplishing his greater good.

Physicians take an oath to “do no harm.” They understand causing pain, like when setting a broken bone, is different than doing harm. They often cause short-term pain for long-term gain. When a limb is set properly and heals completely, the painful treatment is remembered as a necessary step in the healing process. The ultimate good makes the temporary bad acceptable. Christian leaders inflict pain, but try to avoid doing any harm in the process.