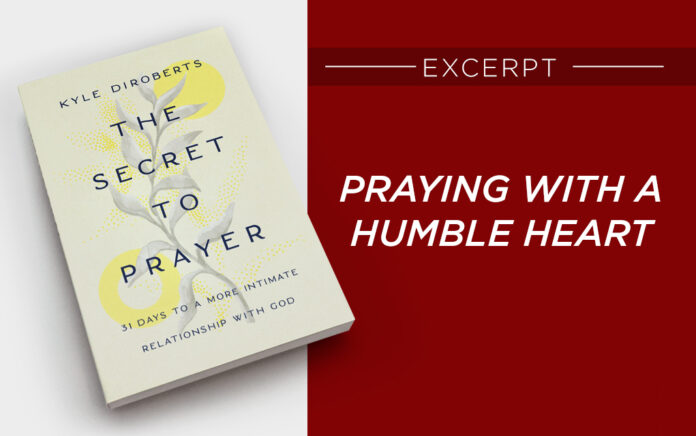 The Secret to Prayer

Praying with a Humble Heart

If God’s response to our prayer is His revelation, then the one praying must remain in a constant position to receive. This is a humbling posture, which is exactly where God wants us.

It would be far easier if we knew how and when God was going to respond. If this were the case, then we could go about our days with little attention given to God because we would possess the confidence to know what it will be like when he reveals His answer.

But we don’t. Instead, we just wait and wonder, and we can’t get too distracted, because we might miss Him. Prayer is a humbling experience as we wait for God to disclose himself, to unveil his answer.

This means we must be dependent on our faith that God is good, that He is the giver and responder, and we won’t know what He has given until he reveals it to us.

I actually think people are too hard on him. I like him. Probably because I can relate to him.

Thomas wouldn’t believe until he was able to see (or touch) Jesus’ scars in both his hands and side. Do you remember how Jesus responded to Thomas? “Oh Thomas (probably), blessed are those who believe but do not see.”

We’ll get to that phrase, “blessed are those who believe but do not see,” in a moment,

but before that, we have to let God’s grace settle in. Before Jesus declares that faith is evident when we believe without seeing, Jesus still stretches his arms out and lets Thomas touch where the nails pierced. Then he lets Thomas touch his side.

The command is to believe without seeing, and Jesus meant it.

But he also helps Thomas in his weakness.

I’m thankful Jesus responded this way, because there are times (many times) when I know the right answer, but I can’t embody it. I can’t accept it. I can’t trust it. What Jesus has shown me through his interaction with Thomas is that he will still be gracious with me as I’m learning what it means to live by faith.

Prayer is similar. It takes faith to believe that God will respond to our prayer.

It may take time for God to reveal his response to our prayer. Time takes faith. And His response may be different than we hoped for or expected.

What do we do when we think God might have revealed himself and answered our prayer?

A good place to start would be comparing what we think God might be saying to what we know God has said to us in his Word. This dependency upon the Word of God helps us to develop confidence as we seek answers to our prayers.

A warning though: as we interpret what God has revealed, remember the tectonic plates Susan taught us about? The ones that shifted when sin entered the world? How it changed everything, including our relationship with God?

One of the side effects of this shift is the way it complicates our conversations with God, because now when we interpret his revelation, we can’t forget that our sin nature desires to work against us and inhibit our ability to interpret what God has revealed.

In other words, the desire of Satan will be to make you think God has revealed himself when he hasn’t. This means we must be humble enough to expect that our interpretation of what we perceive to be an answer to our prayer might be subject to error because we are sinners trying to understand and interpret God’s revelation.

The big picture of prayer is humbling enough, because the very idea that we have to go to someone else for help demonstrates our insufficiencies. And if you pray a lot, you are aware of your insufficiencies a lot.

Then, we have no idea how he is going to respond to our prayer, which is also humbling because we have to live in a waiting, observant posture.

Prayer is pretty much a lot of waiting, and watching, and observing, and being wrong, and waiting, until God finally discloses himself through the means that he so chooses.

This conversation works as long as you are humble.

Excerpted from The Secret to Prayer by Kyle DiRoberts. Copyright 2021. Published by B&H Publishers. Used by permission.