Home Resources Books An Invitation to a Life of Meaning 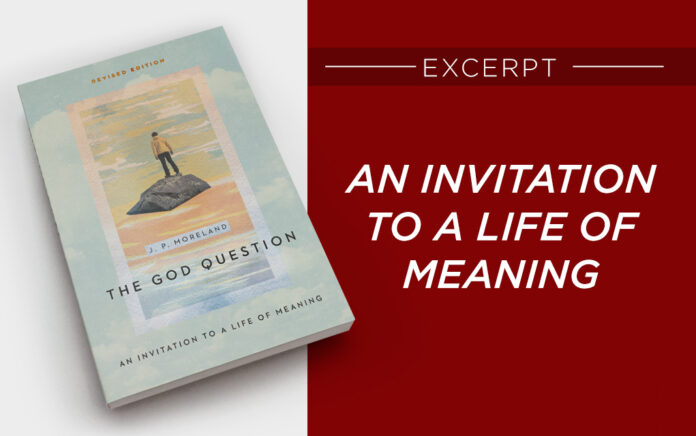 The evidence for God from design is most likely the most popular argument for God.

An Invitation to a Life of Meaning

The human ear can discriminate among some four hundred thousand different sounds within a span of about ten octaves and can make the subtle distinction between music played by a violin or viola. The human heart pumps roughly a million barrels of blood during a normal lifetime, which would fill more than three supertankers. Human eyes are composed of more than two million working parts and can, under the right conditions, discern the light of a candle at a distance of fourteen miles. The eye bears a striking analogy to a telescope: the eye was made for vision; the telescope, for assisting it. Both utilize a sophisticated lens. Both reflect and manipulate light. Both are able to bring an object into proper focus. The muscles surrounding the soft lens of the eye move to bring objects into focus, and a telescope uses dials to move the lens.

What are we to make of these facts? These and myriads of additional facts confirm what is obvious—we are the handiwork of a wise Designer. In fact, the evidence for God from design is most likely the most popular argument for God. I find at least four different sorts of evidence to be particularly powerful for justifying belief in God. Before I describe them, however, I should say a word about the basic structure of the design argument, which, as it turns out, is pretty commonsensical.

Each day we all try to explain the things that happen around us: Why did the water freeze? Why is it raining today? Why is the car parked on the street and not in the driveway? Why is the water boiling now? In these cases, we use two different forms of explanation: natural law and personal explanations. In natural law explanation, we cite a law of nature and physical conditions. The water froze because water freezes at thirty-two degrees (the law), and it was twenty-five degrees last night (physical conditions). When the air reaches a certain saturation point it rains (law), and it is above that point today (conditions). By contrast, we quite often use a personal explanation to explain things. In this case, we cite a person’s ability to do something; his motives, intentions, and so forth; and the means he used to carry out his purpose. The car is in the street because Joe is able to drive (by contrast with Sammy, the family’s five-year old), and he wanted to play basketball last night, so he moved the car in order to clear out the driveway.

The design argument goes like this: Certain facts about the world cannot be explained by impersonal causes, conditions, and laws of nature. But a personal explanation works perfectly. We have no reason to think these facts about the world are unexplainable. It is better to use a form of explanation—personal explanation—to explain them. Moreover, some of these facts have characteristics that clearly point to only one source: intelligent agents. So the intelligent action of a Designer is the best and most simple explanation for these facts.

The first type of evidence that impresses me greatly is the ubiquitous existence of stunning, gratuitous beauty. According to Christianity, the world is not the way it was intended to be. More specifically, death, disease, suffering, and other forms of evil are not part of God’s ideal blueprint for the world. But in spite of evil, the world is still overwhelmingly filled with good things. In fact, the widespread presence of gratuitous beauty—beauty that seems to serve no additional function besides just being beautiful—is powerful evidence for a Grand Artist.

Artists skillfully bring parts of a statue or painting together to form symmetry, elegance, and so forth. They effectively use just the right color coordination or the proper harmony of notes and sounds to create beautiful things. But these features and more characterize the world far, far beyond the meager ability of humans to imitate them. In fact, design and beauty should not be discussed in the abstract. The power and force of beauty comes from carefully attending to specific cases of it: a butterfly, the way a baby is formed in the womb, sunset over Maui, the Alps, the fish that fill the oceans. The world is teeming with overwhelming beauty.

Three things about such cases show why they are best explained by a Grand Artist. First, we all know where beauty frequently comes from—skilled artists who generate it day after day. There is no good reason to deny the analogy between human artifacts and the beauty of creation; thus, we should use the same personal explanation for the latter.

Second, beauty is intrinsically good and valuable. If God does not exist, then the best atheistic account of how everything got here would be a strictly scientific account told in terms of chemistry and physics. But science can only tell a story of what is the case. It can say nothing about what ought to be the case; it cannot even use the category of intrinsic goodness or value, much less offer an explanation of how it came to be. But if God exists, the universe begins with a being who is intrinsically valuable, good, beautiful, wise, and so forth. So if God exists, we have a powerful explanation of how subsequent beauty could come to characterize our universe. But if God does not exist, we have no story of how this could be.

Some atheists think they can solve this problem by saying that at some point in the development of matter, beauty just emerged, and that’s the end of the matter. But “emergence” is just a name for the problem to be solved; it is not a genuine solution. Further, this sort of emergence is a case of something popping into existence out of nothing. Why? From the Big Bang until some stage at which matter reaches a certain complexity, matter can be fully described by its physical, chemical features. This sort of matter does not contain beauty or even the potential for beauty. Then all of a sudden, matter reaches a certain complexity, and presto, beauty squirts into existence. This borders on sheer magic—indeed, magic without a magician!

Here’s the third reason these cases of beauty are best explained by a Grand Artist. To understand this factor, we need to distinguish primary and secondary qualities. Primary qualities are those thought to characterize matter: mass, size, shape, charge, location, being in motion or rest, solidity, and wave characteristics (frequency, amplitude, and length). Secondary qualities are colors, smells, sounds, tastes, and textures. According to science, there (allegedly) are no such things in the world as secondary qualities as common-sense people understand them. Secondary qualities should be reduced to primary qualities: colors are the same things as wavelengths, sounds are just vibrations, and so forth. But these reductions are all false. Colors may be correlated with wavelengths just as fire may be correlated with smoke. But fire is not the same thing as smoke, and a color is not the same thing as a wavelength. A color is a stationary quality smoothly and continuously spread over an object’s surface. By contrast, a wavelength is a colorless, rapidly vibrating, moving quantitative pattern.

Since the time of Newton, Boyle, and others in the seventeenth century, most scientists and philosophers have agreed that if secondary qualities were real, irreducible features of the world, no scientific explanation could account for their origin or their regular, lawlike correlation with primary qualities. The philosopher John Locke gave what is the only plausible explanation for their existence and regular appearance: these were due to God’s good pleasure. I think Locke was right. But why God’s pleasure instead of his justice or some other attribute of God? Because secondary qualities make the world beautiful and enjoyable. Think of how dull the world would be if it had no sounds, colors, tastes, and so forth, and only had particles and waves moving through space. The sheer existence of secondary qualities and their crucial role in making the world beautiful provide powerful evidence for God’s existence, or so it seems to me and many others.

Share on FacebookShare on Twitter
From Outreach Magazine  Study: Half of U.S. Protestant Pastors Hear Conspiracy Theories in Their Own Churches