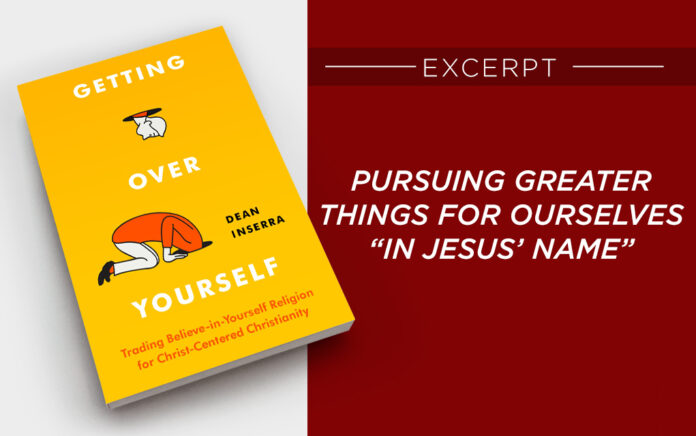 Excerpted From ‘Getting Over Yourself’ (Moody)

Excerpted From
Getting Over Yourself
By Dean Inserra

“Truly I tell you, the one who believes in me will also do the works that I do. And he will do even greater works than these.” – John 14:12

What an amazing statement from Jesus. We will do greater works than Jesus did? What does that mean? “Greater” things sounds wonderful. One well-known pastor even wrote a book entitled Greater. The official website of the book urges, “If you’re tired of being ordinary, it’s time to dream bigger. … It’s time to ignite God’s greater vision for your life.” The book certainly and rightly points to God as the source of strength in our lives. But the focus of the message is achieving what you’ve always dreamed of and not living an ordinary life. It all goes back, once again, to the individual and to desiring something more. It rests upon me “unlocking” some next level of faith to get new prizes. Personally, I do hope every Christian desires to know God’s vision for their life, because, thankfully, he doesn’t leave us hanging on what it is. Scripture is clear: God’s vision for our lives is for us to lose ourselves in service to him and to become more like Jesus by his power. Jesus told his disciples:

“If anyone wants to follow after me, let him deny himself, take up his cross daily, and follow me. For whoever wants to save his life will lose it, but whoever loses his life because of me will save it.” —Luke 9:23–24

Jesus is calling his disciples to attend a daily funeral for their own ambitions and pride. The cross was not a piece of jewelry in New Testament times. It wasn’t a living room decoration carved nicely to fit on the mantel. There weren’t crosses hanging in any place of worship. A cross meant one thing: death. It was a curse to hang on one, to receive capital punishment in a gruesome manner for crimes committed. It would be the equivalent of being told to pick up your lethal injection or electric chair. For Jesus to tell his followers to carry their crosses (prior to his own death, which would probably have shed light on the metaphor) meant a call to die to themselves. This probably sounded insane, but is much better than the alternative given in the next verse: “For what does it benefit someone if he gains the whole world, and yet loses or forfeits himself?” (Luke 9:25).

From Outreach Magazine  David Platt: Something Needs to Change

This is hard for those of us living in 21st-century America to grasp, as denying ourselves if often reduced to trivial inconveniences or allowing someone else to pick the restaurant we go to after church. But our Christian brothers and sisters in the early church sometimes faced an imminent martyr’s death or complete expulsion from their families due to the decision to give their allegiance to Jesus Christ. We have Christian brothers and sisters around the globe now who experience those costs of following Christ. The “greater things” Jesus promised were not going to come with an earthly crown, decorated with the jewels of their God-sized dreams. They were going to come with a cross, ultimately the cross of their Lord, who would give his life so they could inherit a different kingdom than this world —one that is eternal, yet to come.

The new prosperity gospel positions us as the primary actors and securers of our blessing if we “activate” our faith in victory. Yet we know the Bible clarifies that Jesus is the author and perfecter of our faith (Heb. 12:2) and that God is carrying on to completion the good work He started in us (Phil. 1:6). Our God did all the work in saving us, and He decides who we are to be. John the Baptist modeled the proper posture when confronted about his ministry’s dwindling popularity as Jesus’ earthly ministry picked up speed, saying that “[Jesus] must increase, but I must decrease” (John 3:30). How we are to serve in the grand scheme of history is not ours to determine. Matt Fuller pointed out that “the great irony is that if we exchange the glorious humility that the Lord has given us for an insignificant self-importance, we become far less.” In the desire for something greater, it is easy to miss that the actual road to the greater things Jesus promised is not paved with our desires but with small steps of obedience and faithfulness as soldiers in his kingdom and mission.

I draw heavily from D.A. Carson’s writings on what Jesus meant by “greater things” in John 14, as well as some advice he gives when young, zealous Christians asks how they should “leverage” their gifts for maximum kingdom impact. On John 14, Carson writes:

[The disciples] are privileged to participate in the effects of Jesus’s completed work. Until he returned to his Father and bestowed the Holy Spirit, everything Jesus did was of necessity still incomplete. By contrast, the works of the disciples participate in the new situation that exists once Jesus’s work is complete. Their works are greater in that they are privileged to take place after the moment of fulfillment.

Getting to participate in this mission and live in this completed work of Christ is far greater than anything else I can imagine this side of heaven. It is a tremendously right blessing that Jesus says we get to be part of this together.

In pop-Christian circles, doing greater things simply means greater success or a greater spotlight. Even more conservative believers may frame this under the notion that they want to make greater impact for the kingdom. Whether you’re claiming “the best is yet to come” or “I want to use my gifts for God’s glory on the biggest platform possible,” this is a dangerous lust and one Christians must be willing to quickly recognize in themselves.

Excerpted from Getting Over Yourself: Trading Believe-in-Yourself Religion for Christ-Centered Christianity by Dean Inserra (© 2021). Published by Moody Publishers. Used by permission.