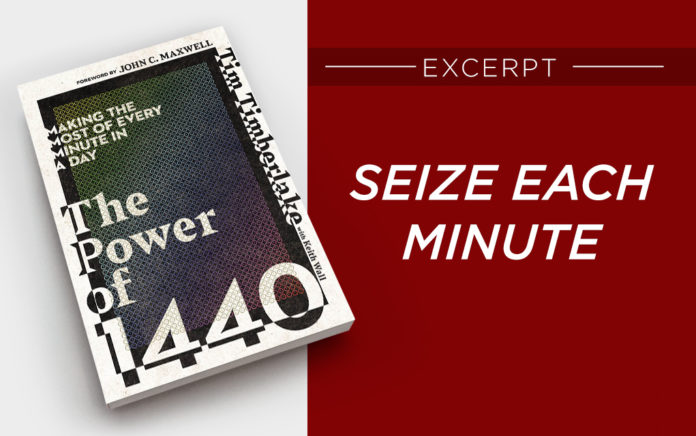 Excerpt From The Power of 1440 By Tim Timberlake When I was twelve years old, my father and I went to a shopping center in the fashion district in Los Angeles and sat down for a quick lunch. Dad and I both loved hot dogs. I mean absolutely loved to the point of considering ourselves […]

Excerpt From
The Power of 1440
By Tim Timberlake

When I was twelve years old, my father and I went to a shopping center in the fashion district in Los Angeles and sat down for a quick lunch. Dad and I both loved hot dogs. I mean absolutely loved to the point of considering ourselves connoisseurs. So that’s what we decided to eat. As we settled in for our first bites, an odd thing or surgery. After some testing, it was later determined to be terminal stage- four cancer. Some days went by before he underwent an eight- hour surgery, followed by countless rounds of chemo and radiation, all in an attempt to remove the large cancerous tumor. The process ravaged his body, leaving him clinging to life, with only a portion of his tongue.

This didn’t make sense. I had never seen my dad do any wrong. He was the epitome of a Christlike man, preaching the Word of God far and wide. And most important, behind closed doors, around the people who mattered most to him, he lived out what he preached. So this sudden health crisis was confusing. How could God allow this?

I watched my father go from a strapping six foot four inches and 280 pounds to a straggly 170 pounds. And because part of his tongue was removed during the surgery, he couldn’t eat or drink through his mouth. He was fed a liquid diet through a gastrostomy tube placed in his stomach. Despite his discomfort, and though it looked on the outside like his life was wasting away, he still steadfastly preached the Word of God. But as his health continued to worsen, he became so weak I eventually had to dress him. On Sundays, after I put his clothes on him, he would go to church and preach, always determined to help as many people as possible by teaching about God’s grace and love.

Despite the example of my father’s deep faith, my doubts about God grew. How could a loving heavenly Father allow my beloved earthly father to suffer so much? How could this warrior of the faith, a paragon of virtue and integrity, be abandoned in his hour of greatest need by the God he served?

I became distant from the God my father so adamantly talked about, a prodigal son of sorts, living for myself and running in the opposite direction of the foundational truths my parents had taught me. I couldn’t help but wonder if my godly father could be hit with such a terrible disease, then what did God have in store for me, with all my many flaws?

Fast-forward five years. My father had been in and out of the hospital, enduring surgeries, chemotherapy, and radiation. I was seventeen and visiting West Palm Beach, Florida, doing a number of things I probably had no business doing. While there, I received an urgent call from my mother that my father had been hospitalized and had passed away. I frantically rushed home to figure out what had happened and to be with my mother.

From Outreach Magazine  How People Pleasing Hurts Your Leadership

To my utter shock, I came back to find my dad was still alive. He’d had a near- death event and flatlined, but he had been resuscitated. Later, he told my mom that he could not go home to heaven until he had a chance to talk with me about what it means to be a man, especially a man of God.

A few days later my father sat me down for that talk. He told me what it takes to be a real man. He talked to me about his faith in God and what it means to follow Jesus. He shared with me his thoughts about marriage, family, parenting, ministry, and friendship. Thinking back to it now, it reminds me of the sacred Old Testament practice of a father sitting down with his son (in the story it was his firstborn son), offering his blessing, and passing down the birthright.

We talked for five hours. In those sacred moments, Dad poured out his heart and told me everything I needed to know about life, love, faith, and calling. He talked openly about his dreams, disappointments, successes, and setbacks. As rich as that time together was, to be honest, I wasn’t paying very close attention to everything he said. Since he had miraculously recovered and was speaking to me as lucidly as ever, I thought we’d have many more conversations together. I thought I had more time with him. I was wrong.

When our discussion ended, my father went to bed. That same night my mother woke me at 2:00 a.m. to tell me my father was incoherent and unresponsive. We called the EMTs, but before they arrived, my father passed from this world to heaven.

I knew then I had to step up and be the man I was raised to be. I may have had my doubts, but my father never did. And through his faith, my faith grew. The faith of my father laid the groundwork for my faith.

I’ll be real and genuine with you about that final conversation with my father. I feel deep regret because of that missed opportunity. If I could relive those five final hours with my dad, I would be 100 percent fully focused, like a student listening to a beloved master teacher. I would have a notebook in my lap, writing down every pearl of wisdom and every morsel of sage advice. I would be a sponge, soaking in every word, lesson, and encouragement. But I didn’t. And now I realize those hours— those three hundred minutes— were a turning point in my life that I largely let pass by. That day was also my eighteenth birthday, a day that will forever be burned into my memory and a day I’ll always wish I could get back.

The good news is that experience taught me an essential principle of life and faith: I will try, to the best of my ability, to never again let an opportunity slip by unnoticed and unheeded. I certainly have moments, like everyone, when I am distracted and preoccupied, but I make every effort to seize each minute and heed the guidance of Scripture: